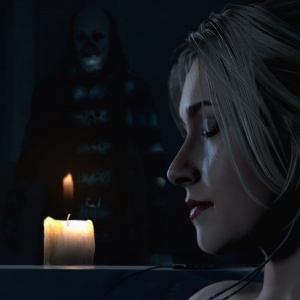 Horror fans can finally tell the silly female protagonist not to hide in the closet.

I’ll admit I don’t have an exhaustive familiarity with the horror genre. I mean, I’ve seen enough slasher movies to know that the monster guy is probably a real jerk, and that entering a dark room is never going to end well. Until Dawn isn’t a survival horror or even an action game, really. It’s something else – an interactive horror story with hundreds of branching decisions allowing you to kind of feel like you are in control of the heroine’s fate. That is, until old crazy mask-face guy shows up.

From the onset of the demo, Until Dawn makes you feel creeped out. Attractive blonde Sam is taking a bath and listening to some classical music, when the camera pans to reveal the monster already there, watching. He nicks her clothes and departs, the closing door breaking Sam from her meditation. She’s nude – of course she is – and the monster nicked her clothes, so she has only a nice white towel around her as she starts to explore the lodge where she and her friends have been staying. There’s some light exploration, but the game clearly wants you to tread a specific path due to the arrows painted on the balloons. The conflict between creep and sweet is utilized, as you can almost believe Sam’s friends were preparing a surprise party for her.

The conceit of the game is the decision making you get to do and the results of those decisions. The system is deftly introduced by a short survey that takes place before the demo begins. What scares you more, needles or gore? What is worse, being in the dark or alone? You answer the questions by pointing the light sensor of the PS4 controller at one of the choices displayed on the screen and pressing a button to confirm. It’s a little hokey at first, but you could say the choose-your-own-adventure-ness of it is charming.

I was a little disappointed when the decisions were a little telegraphed. I answered “needles” to the question above, and when the monster guy arrived, he was holding a big honking needle filled with green goo in his hand. Really? That’s not scary. That’s just silly. The choices during the action sequences also feel a little forced. Hide under the bed or jump past it – it doesn’t really matter because you’ll end up at the same door anyway. Some choices have more impact, I’m sure, but I wasn’t that impressed with the consequences during my short time with the game.

That said, there is a lot of potential with the collaborative nature of playing Until Dawn. At the Sony keynote, it was fun to hear the crowd yelling responses out to tell the demonstrator what to have Sam do and at the storytelling panel, someone called Until Dawn the first horror party game. Now that is scary.