Spoiler warning: This article will contain spoilers from the Game of Thrones books, as well as the first five seasons of the show. It may touch on subjects the show hasn’t, so be warned.

Update: I should have known. The premiere, while always thrilling, does tend to do more with recap and intros than following up on cliffhangers. Episode 2 is where they do that, and Season 6 is no exception.

Where Episode 1 brought the last season back into focus, Episode 2 is where things began to move forward. Arya got her redemption with the Many Faced God, and was welcomed back into the temple. “A girl is not a beggar anymore.”

In my original post below, I mentioned Melisandre being vastly more powerful than Thoros of Myr, but she certainly didn’t seem it here. There’s been reference in the story to the Lord of Light being as mysterious in his works as any other deity, and nobody’s really sure why the drunken and once faithless priest, Thoros of Myr can bring Berric Dondarrion back from the dead without breaking a sweat. Melisandre was devout to a fault, and her god abandoned her.

The resurrection ritual scene was actually one of the most disappointing scenes I’ve seen. The ritual seems to be going nowhere, then we see Melisandre start again with renewed vigor, and we’re sure it’ll work. Then it doesn’t work. Then, SURPRISE, it did work. Maybe it’s from the number of horror movies I watch, but that’s so cliche, I’m surprised to see it in a show of this caliber.

And, with that, Jon Snow lives, and millions of people around the world now get to say, “I told you Snow.” I make no apologies.

We’ve talked about Game of Thrones for five seasons now, and we’re certainly not going to quit now.

By this point, you very likely have an idea of what to expect from this Sunday’s Game of Thrones Season 6 Premiere, but in case you don’t, I’ll lay out the basics of where we left off and where we’re likely to go this season. Given that Season 5 concluded with Jon Snow dead at Castle Black, where the red priestess Melisandre had just returned. The obvious conclusion is that she’s going to bring back Jon Snow, just like Thoros of Myr repeatedly brought back Berric Dondarrion and even resurrected Catelyn Stark after the Red Wedding. Melisandre, by all accounts, is vastly more powerful than Thoros, so resurrecting Jon Snow is not likely to even be much of a challenge for her.

As a point of reference, when Jon Snow was killed in the books, I never for a moment thought he was gone, despite occasional insistence from friends. I didn’t have a particularly compelling reason to think so, except that Melisandre could do it, but if you take into account the most prolific fan theory about Jon being a Targaryen, it seems a lot more necessary. As far as I could tell, Melisandre has never cared about anything except ensuring that the White Walkers don’t overwhelm Westeros in its entirety. She serves the god of light, and the White Walkers represent the eternal night. The coming winter is made all the more ominous by her descriptions of her visions, and her support of Stannis was predicated on her visions of him winning the throne, and providing the necessary strength of arms to fend off the army of dead beyond the wall.

Now that Stannis is dead, of course, Melisandre needs a new hero to support, and, given the Targaryen’s long history of military dominance, thanks in part to the family’s affinity for dragons, Jon Snow seems the strongest candidate this side of the Narrow Sea. Melisandre doesn’t seem particularly interested in the Iron Throne for its own sake, but it does offer the occupant the authority to conscript armies, and Westeros will need a hell of an army to stop the march of the Others’ army of dead. 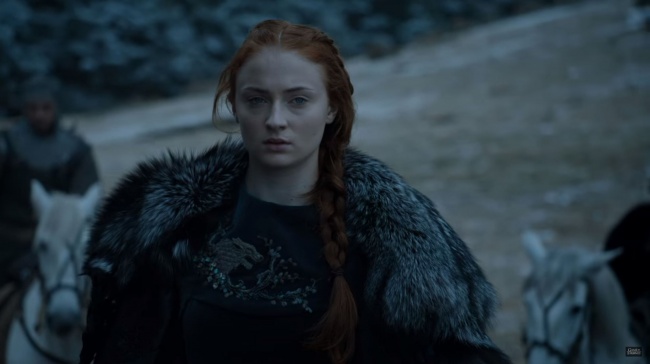 If you’re wondering what I’m talking about with Jon Snow and the Targaryens, the long and short of it is that Ned Stark staunchly refused to talk about Jon’s mother, which I took to be his way of respecting her honor, but in retrospect does give the situation a bit of a fishy air to it. Jon’s eyes are blue, unlike any of his brothers, though Sansa also has blue eyes inherited from her mother’s side. Ned was devoted to his sister Lyanna’s memory to the very last bounce of his head, and her dying words were “Promise me, Ned.” Which seems very obvious to relate to an important secret or task. Though Lyanna was betrothed to Robert Baratheon, who was the reigning king when the series began. Rhaegar Targaryen, son of the Mad King Aerys decided he wanted Lyanna himself, so he kidnapped her, though whether she was a willing captive is a matter of debate.

When her brother Brandon rode with his men to King’s Landing to challenge Rhaegar and reclaim his sister, Mad King Aerys had all but one of them killed, including the Stark’s father, Rickard. The king then called for the head of Robert and Ned, which ignited the rebellion, as their adopted father, Jon Arryn, whose death brought Ned to Kings Landing in the first season, raised his bannermen to end the Targaryen dynasty.

There’s a lot of reference to Lyanna having been raped by Rhaegar, though there are as many hints that they loved each other, and it was more of an elopement than a kidnapping. Lyanna was already betrothed to Robert Baratheon, so the betrayal would be a dishonor, which may play into Ned’s promise as she died. That’s not to mention that throughout, Robert Baratheon seemed to believe wholly that Jon Snow was Ned’s bastard by a tavern wench, and it seems very likely that the Ned’s promise involved keeping Jon’s Targaryen blood a secret from Robert, who would have almost certainly had him killed, and would have divided the Baratheons from the Stark family.

Now that the series has largely outpaced the books, and the story nears its end, the mysteries and secrets that are meant to be revealed must be soon, and the truth of Jon Snow, at least from where I’m standing, seems to be at the forefront of the battle for not only the Targaryens to reclaim the throne, but to stop the eternal night and invasion of the army of the dead.

We’ve only got a few hours left before we know for sure what we’ll learn from the premiere, so hit the forums now with your own theories!