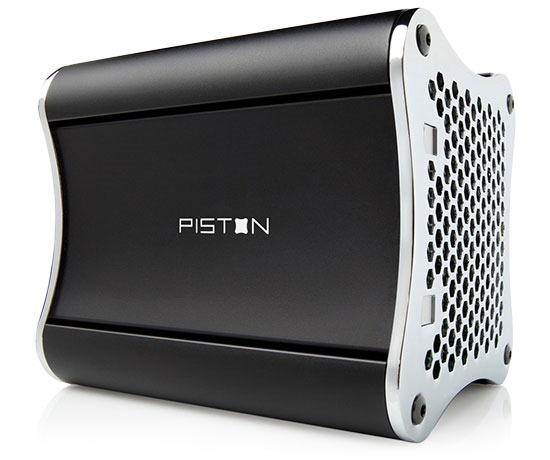 Little is known of Valve’s own Steam Box, but Xi3’s “Piston” is something similar, and is being developed with Valve’s support.

Xi3 unveiled the “Piston” earlier in the year, describing it as “a computer game system that’s optimized to support Steam and its Big Picture mode interface for high-definition televisions.” At the time, no price point was mentioned. We now know how much the first “Steam Box” will cost, as the Piston is now available for pre-order from Xi3’s website, with the cheapest model coming in at $1,000 USD.

Some of the Piston’s specifications have been revealed, with Xi3’s website stating it will have 8 GB of RAM and a 3.2Ghz Quad Core processor. All other specs, including what graphics processor it will use, have not yet been announced. Pre-ordering any one of the three Piston configurations by March 17th will knock $100 off the price (which is why you will see cheaper prices than those listed here on Xi3’s pre-order website). Xi3 says the Piston is “grapefruit-sized” and treads the line between console and PC.

“Clearly, the computer/video gaming market is huge, both in the personal computer and traditional console markets,” said Xi3 founder and CEO, Jason A. Sullivan. “That being said, we believe there is a crying need for a machine that captures the best of both worlds, with the upgradeability of computer gaming rigs and the design and form factor of consoles. We believe our Piston consoles do exactly that-deliver the beauty and small size of consoles with the upgradeability of computers.”

The Piston is backed, at least indirectly, by Valve, which has invested in its developer Xi3. Valve’s own Steam Box is expected to enter the prototype stage in the coming months.

Update: Valve has distanced itself from the Xi3 Piston, calling it an “unofficial Steam Box.” Valve director of marketing Doug Lombardi has stated that while Valve did have some dealings with Xi3 Corporation in the past, it had nothing to do with the Piston.

“Valve began some exploratory work with Xi3 last year, but currently has no involvement in any product of theirs,” he said.

Richard Garriott Explains Why He Needs a $1 Million Kickstarter