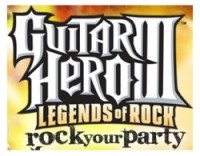 Activision is sponsoring the Guitar Hero III Rock Your Party contest over the Super Bowl weekend, with more than 900 prize packages to be given away to aspiring rock monsters.

After registering their gamer tags, players will automatically receive a sweepstakes ballot every hour when they play a multiplayer Guitar Hero III session over Xbox Live between 12:01 a.m. on February 1 to 11:59 p.m. on February 3. Xbox Live Gold members can also sign up by downloading the free “Rock Your Party” gamer picture from Xbox Live Marketpace.

Complete Rock Your Party rules are available here, and links to registration, prizes and other information can be found at the Guitar Hero III Rock Your Party contest website.