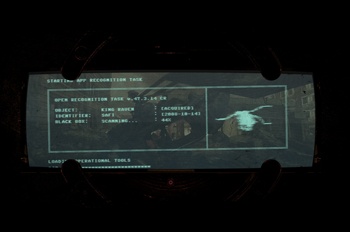 Every tag tells a tale. In Gears of War, humanity’s real struggle begins on Emergence Day when the Locust Horde erupted from beneath the cracked surface of the doomed planet Sera. The ensuing bloodbath and protracted war leaves the scorched and mangled bodies of countless soldiers in its wake. As the conflict continues onto new ground, little remains of these fallen warriors- save for metal COG tags imprinted with a code memorializing their last day of breath. Collecting these tags from fallen comrades served as a grim side-quest throughout the first game, and it will likely factor into the upcoming sequel. Strangely, the little gears are now cropping up at unusual locations in the real world.

One such cog mysteriously arrived at The Escapist office this month. The palm-sized metal gear, a perfect replica of those issued to every soldier serving in the fictional Coalition of Ordered Governments, was accompanied by instructions to enter the CSID code etched into the cold metal at a Gears of War 2 website. Over the past month, other gaming media outlets reported received similar cogs. However, what initially seemed like an over-elaborate PR stunt, is quickly turning into an over-elaborate PR stunt with a very cool twist. Microsoft and Epic clearly want our attention. More importantly, they want yours too.

At the Last Day website, an interactive flash animation sequence immediately boots up from what appears to be the first-person perspective of a robot recon drone. The view pans down across a ruined city draped in smoke and flames. It comes to rest at a satellite dish. Running down the left and right sides of the view screen are a total of 26 small notches that can be selected to move the drone to explore the twisted and charred cityscape. Each notch represents an interactive stop along the path. While you can move along the entire route of the destroyed city, only unlocked elements can be triggered.

Clicking on the dish, the first of many interactive items, brings up a video depicting various panicked news reports from Emergence Day. It sets the grim mood rather nicely. Moving on reveals interesting scenes containing game art sketches, downloadable wallpapers, and other G.O.W. imagery. These PR materials are less interesting than the video and audio snippets you’ll uncover that play off the Gears of War mythos. Several include shaky security cam footage of a bloody operating room, a series of spooky recorded payphone calls made by frantic citizens experiencing contact with the Locust for the first time on Emergence Day, and a satellite transmission calling for a suicidal orbital strike. Then there’s the burning funeral pyre of a soldier’s corpse, security footage of survivors scavenging for food in an alleyway, and ammo boxes with bullets etched with unusual inscriptions.

Each of the 26 stops along the drone’s path appears to offer more of these eerie snippets, but the majority of them are locked for now. Clicking on an unlit element results in a horrible buzzing sound and the message indicating the COG tag is missing. Only eight were lit when I first began exploring the ruined virtual landscape. Within the past week two more notches have been unlocked. Entering our CSID code simply opened up a download of Gears of War 2 artwork, but codes located on other cogs surfacing in strategic locations around the U.S. and beyond seem to hold the key to unlocking the mysteries contained on the site. This is where you, dear reader, come in.

Apparently, 1,000 metal COG tags have been sent out into the world. Each contains a unique CSID code to unlock content on the Last Day site. According to Gears of War community manager Six Okay, “a very limited number of COG tags have been hidden at various gaming events and famous public places worldwide, and a limited number were mailed out directly. To date, 315 COG tags have been recovered from around the world, in places like San Francisco, Los Angeles, Toronto, Seattle, London, Paris, Sydney, and Budapest.” Clues to help discover the locations of the hidden cogs have appeared across the internet in the form of GPS coordinates for physical locations in the real world. These hints have appeared at the Epic Games forums, on Six Okay’s Twitter site, and even within the Last Day site itself.

Gears of War fans on the Epic forums have picked up on the ARG (alternative reality game) with obsessive force. This massive, worldwide scavenger hunt gives anyone the opportunity to discover the coordinates needed to venture out and potentially nab their own hidden COG tag. Some participants have gone to great lengths to hunt down their metal souvenir and CSID code. They’ve driven many hours, searched for days, and toiled – sometimes in vain – in hopes of obtaining their precious bounty. While most of us simply wait for new areas of the Last Day site to be unlocked as more CSID codes turn up alongside each recovered cog, a number of Gears of War crusaders have taken up the hunt.

COGS will be hidden until November 7 when Gears of War 2 officially launches. There’s still time to uncover new coordinates and throw your hat into the ring to track down the elusive metal relics. Find one and it’s yours to keep. Just be sure to input the CSID, so others may benefit from the fruits of your labors. Will all the COGs be located? What other secrets lay hidden among the Last Day vignettes? Stay tuned…

Nathan Meunier is trying to figure out how to transplant his last memories onto a hunk of cheap metal for someone in the future to find and decode.