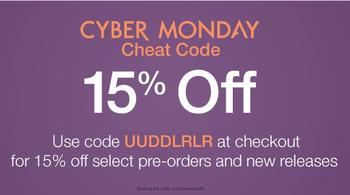 To celebrate Cyber Monday, Amazon has snuck an easter egg into their video game discount.

The Konami code debuted in Gradius, originally added for play testers to be able to run through the entire game with a full set of power-ups. However, the code was never removed and was available when the game released for the NES. It was later made famous by Contra, granting the player 30 lives when they hit up, up, down, down, left, right, left, right, B, A during the title screen. Since its creation, the code has snuck its way into a significant number of video games over the years. Today, you can use the code to unlock savings on video games.

Amazon is currently offering 15% off select new and pre-order games and select accessories with “Cyber Monday Cheat Code” UUDDLRLR – a variation of the Konami Code.

Mortal Kombat X DLC Characters to be Revealed This Week