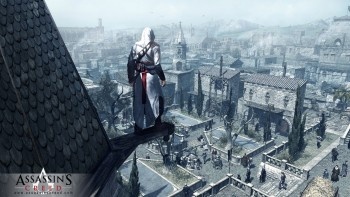 Assassin’s Creed 2 will be set several hundred years after the events of the original, according to industry analyst Michael Pachter, who mused that it could take place during the French Revolution.

In a recent episode of the Gametrailers show Bonus Round, Pachter said the Assassin’s Creed sequel would take place “several hundred years in the future,” specifically, “sometime in the 1700s.” The new time frame was “presented by Pachter as fact,” according to a Giant Bomb report, while his statement that the game could possibly take place during the French Revolution was purely speculation.

Revolutionary France isn’t exactly a deeply-plumbed game setting, and if Pachter is actually on to something here it could very well prove to be one of the more interesting environments to come up in years. Of course, how well-informed this speculation actually is is anyone’s guess, and while Ubisoft did confirm that it is “working hard” on the sequel, the company refused to acknowledge how right – or wrong – he may be, saying, “This is only a rumor and we would prefer not to comment on rumors.”