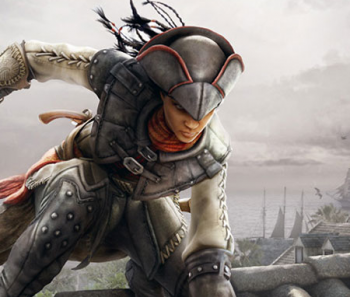 Cramming a console-sized experience onto a handheld system can’t be an easy affair. After just a few minutes of Assassin’s Creed III: Liberation, it becomes clear that the compromises go far beyond just working with a smaller screen.

Liberation has no substantial connection to the existing Assassin’s Creed storyline. Unlike the console titles where you play as the ancestors of Desmond Miles, Liberation makes little attempt to connect itself with the present day. Instead, the game is presented as a historical documentary of sorts, with the events of 1765-1780 New Orleans taking place within a simulation created – and apparently sold – by Abstergo Industries. This approach suits the handheld well, and favors the pick-up-and-play style the title is going for.

You play as Aveline de Grandpré, daughter of a wealthy French shipping magnate and his slave-turned-wife, Jeanne. Because of her father’s considerable business and social influence, both Aveline and her mother escape slavery and Aveline grows up with much privilege. Jeanne disappears under mysterious circumstances, and Aveline’s father eventually remarries. Aveline is then recruited by an escaped slave named Agaté who trains her, and brings her within the ranks of the Assassin Brotherhood. Aveline is a remarkably unique character, and as an assassin she is utterly ruthless. Unfortunately, her story is so broad that it feels unfinished, and you’ll hunger to learn more about her personal struggles, especially in the waning hours of the game.

From her three distinct backgrounds – slave, wealthy business heir, and assassin – come the three different personas which Aveline uses to complete her objectives. Each version of Aveline offers distinct bonuses and drawbacks: The “lady” persona gains suspicion much more slowly, but her flashy garb prevents her from scaling walls. The slave outfit lets you blend in with other working folk, but takes more damage in combat. And the assassin outfit deals out kills with ease, but good luck flying under the radar if guards are lurking nearby.

As is customary in the Creed series, combat is split between stealth takedowns using hidden blades and full-on throwdowns with adversaries using swords, fists, and even a firearm or two. If you can manage it, rubbing out your victims without raising the ire of armed guards is always preferred, but fighting four or five foes at once provides its own sense of accomplishment.

Missions come in two flavors: story missions and side quests. Side quests include things like gathering collectible items and helping slaves escape captivity. Story missions, on the other hand, almost always task you with either taking out a target or forming a plan on how to do so. The series’ open world gameplay is alive and well in Liberation, giving you the freedom to approach or avoid each mission at your leisure. Finding the perfect, stealthy route to your victim and taking them down without so much as a scream is exhilarating.

Getting to your objective involves a lot of wall-climbing and roof-jumping. There are plenty of towering structures to scale, offering a better view of your surroundings, and of course, the familiar carts of hay and piles of tree branches litter the streets to give you a nice, soft landing spot should you choose to take the leap. The bayou offers a wealth of trees to climb, which helps offer some variety, but these can be considerably more difficult to scale in a precise manner. Expect to fall hard a few times before perfecting your technique.

As an Assassin’s Creed title, Liberation stands tall in its attempt to replicate the console experience. Each location you get the chance to explore feels large and expansive, and you’ll never feel like the settings have been shoehorned onto the Vita. The streets of 18th-century New Orleans bustle with activity, the watery Bayou is filled with wildlife and seedy smuggling operations, and even a brief trip to Mexico offers location-specific touches and plenty to see.

While the game’s ambition can’t be faulted, you’ll be reminded that you are in fact playing on a handheld system far too often. Turning down a new street can cause NPCs and objects to suddenly pop into existence, and when the action gets intense, the framerate takes a knife to the throat. Liberation is also a major offender of adding useless, Vita-specific touches that quite simply do not work.

When I say they don’t work, I don’t just mean that they don’t fit into the story, I mean quite literally that they do not work. One particularly egregious offender is a mechanic that demands that you point the Vita at a bright light source in order to read hidden messages on slips of paper. You’ll be asked to do this several times throughout the story, and never once does it actually function as intended. Every single time I attempted it, I pointed the system’s camera directly at either the sun or a light bulb, and never did the message unlock while doing so. It seems to be completely random, and once it even unlocked on its own while the camera was completely covered and dark. There is quite honestly no excuse for this level of broken functionality in a full retail release.

The touchscreen features – which let you do everything from string together combos to pick pockets – are a mixed bag to say the least. Most of them work most of the time. What it comes down to is that if there’s a button assigned to any particular action, you’ll want to use it, and if not, do your best not to drop your Vita while fiddling with your fingers.

The included multiplayer mode is also nothing to write home about. If you’re expecting a portable version of what past Creed titles have offered – hunting down fellow assassins on crowded streets – you won’t find it here. It’s simply a stat-juggling game where players work together to control “nodes” around the globe. There is no combat to speak of, and no real action of any kind, aside from comparing your numbers to those of your opponents. When you start the mode you get to choose a faction -either Assassin or Abstergo – and as you can imagine, nobody picks anything but Assassin. The map is completely dominated by red nodes signifying Assassin control, minimizing any real need to play – simply pick Assassin and you’re already winning. Yuck.

Bottom Line: It’s almost as though Ubisoft wasn’t confident enough in Liberation‘s story and gameplay to let it stand on its own. The result is a game that is fun to play, but in spite of itself. It’s an Assassin’s Creed game through and through, and fans of the franchise will find the key elements very much intact. But brace yourself to deal with useless gimmicks and a patchwork story that ultimately holds Liberation back from greatness.

Recommendation: If you’re into slicing throats, you’re going to have a good time, but if you prefer a good story to rivers of blood, you’re going to be let down. Liberation just isn’t the Vita-seller it could have been.