Developed by Ubisoft Quebec. Published by Ubisoft. Released on October 23, 2015. Available on Xbox One (reviewed), PlayStation 4, and PC (on November 19, 2015). Review copy provided by publisher.

Assassin’s Creed Syndicate drops you in London, 1868, during the Industrial Revolution. The rich have gotten richer, and the poor, though they have new freedoms, have grown poorer. The title is set against the backdrop of criminal enterprise, where Templar Grand Master Crawford Starrick has influence over everything from police to politics. The Templar’s iron grip on London is strengthened by a partnership with Maxwell Roth and his gang, the Blighters, whose presence dominates all seven boroughs. In Assassin’s Creed Syndicate, you’re tasked with clearing the Blighter influence in each of London’s boroughs, simultaneously growing your own gang – The Rooks – and gradually releasing Starrick’s influence on London. And, of course, you’ll be assassinating a lot of people. 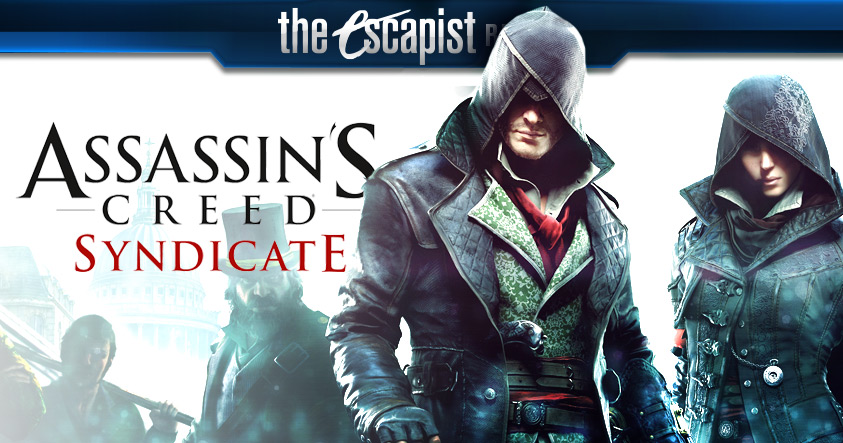 Syndicate‘s predecessor, Assassin’s Creed Unity, was a beautiful disappointment: Often feeling cold, with a significant number of bugs and glitches at launch. Many, myself included, were worried that Unity was an indication of the end for Ubisoft’s storied franchise, particularly considering it starred an unimpressive protagonist with a tired story. Is Assassin’s Creed Syndicate enough to put the franchise back on track?

I believe it is.

This time around, Ubisoft ditched multiplayer in order to focus exclusively on a complete and satisfying solo experience. Assassin’s Creed Syndicate has two playable protagonists: twins Jacob and Evie Frye. Jacob is a more physical character – the type that I am most typically drawn to and spent the most time with – while Evie is quick and stealthy. The attention given to the individual personalities of the characters was refreshing. There was a predictable sibling rivalry, although their influence on one another was equally apparent. Jacob is overly impulsive (not to mention a total dork, in a good way) while Evie is excessively methodical. Yet when they are together there is a feeling of completeness to their characters that wouldn’t be possible to capture with only one or the other.

Syndicate opens with a pair of assassination missions, one for each twin. After completion, the two decide to go rogue, hopping a train to London with the goal of ultimately overthrowing the Templars and returning the city to the people who built it. The game has some impressive surprises, with the Frye twins making unlikely friends and even more unlikely enemies. The main story missions are customized to one or the other, however you can swap between the two characters outside of a story sequence, and can use either when completing a number of missions in each borough. I’ll admit I was worried when I first heard about the interchangeability of the protagonists. It’s a mechanic that often goes wrong, especially when each character has individual storylines. In Syndicate, the transition always feels seamless, and there’s a balance ensuring choice is available to the player without jeopardizing the game’s story. 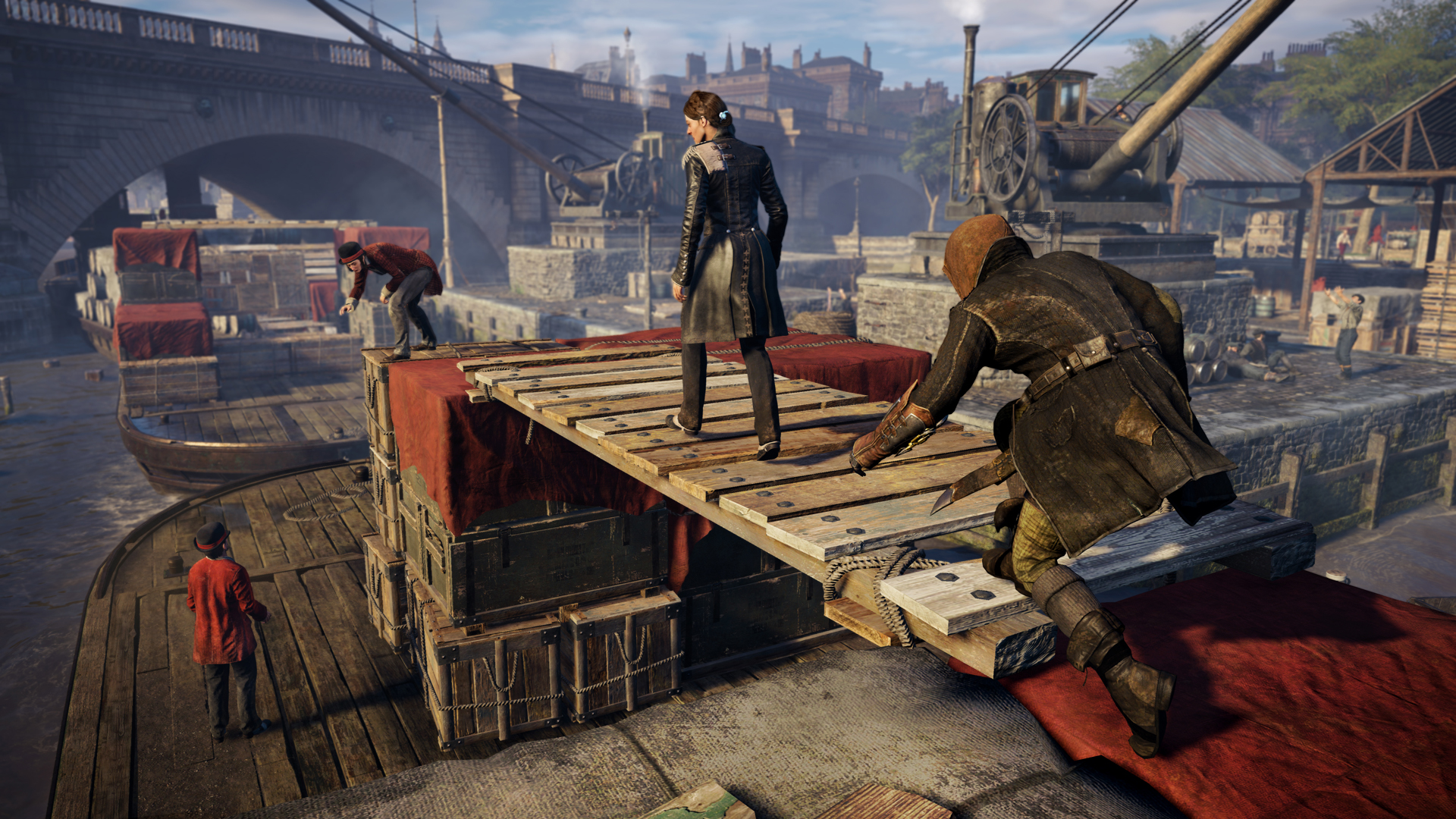 While Assassin’s Creed Syndicate obviously focuses on the Frye twins, their missions, and the relationships that they forge with a variety of different people, the real star is London itself. Ubisoft has always focused on implementing an intense amount of character in the Assassin’s Creed locations, and Syndicate‘s London is no exception – on the contrary, I believe it to be one of the most spellbinding locations in the franchise’s history. The setting captures the ups and downs of the Industrial Revolution, focusing equally on the corrupt wealthy and the disenfranchised who essentially live a life of slavery. London was not used as a mere environment in the game, but rather as a catalyst for every event that unfolds in the game. Each of the districts has a unique feel, from prosperous Westminster to the slums of Whitechapel. The music is customized to suit each area brilliantly, and by halfway through my time with Syndicate I was able to tell when I crossed borders without checking the map.

The controls in Assassin’s Creed Syndicate feel much more fluid and responsive than in any of the earlier AC games. The combat has improved dramatically in Syndicate, like the fluid transitions from hand-to-hand combat to using an item. You can easily fire off a pistol in between punches, as key items are mapped to a single-press button that can be toggled without bringing you to a standstill. There’s no awkward pausing to access weapons or items. Combat is fast paced and brutal, with fluid attacks, dodges, and transitions.

As natural as the combat feels, there are many challenges where stealth is the only option – because, you know, it’s a stealth game. Kidnapping targets in particular is tricky, because instead of fighting you they run as soon as they’re aware of your presence. Since it’s ideal to bring them back alive, Evie is the best character for these missions – especially when you’re able to unlock her chameleon skill, which allows her to become invisible when not moving. Between that skill and a healthy stock of smoke bombs, I felt like I was capable of anything. 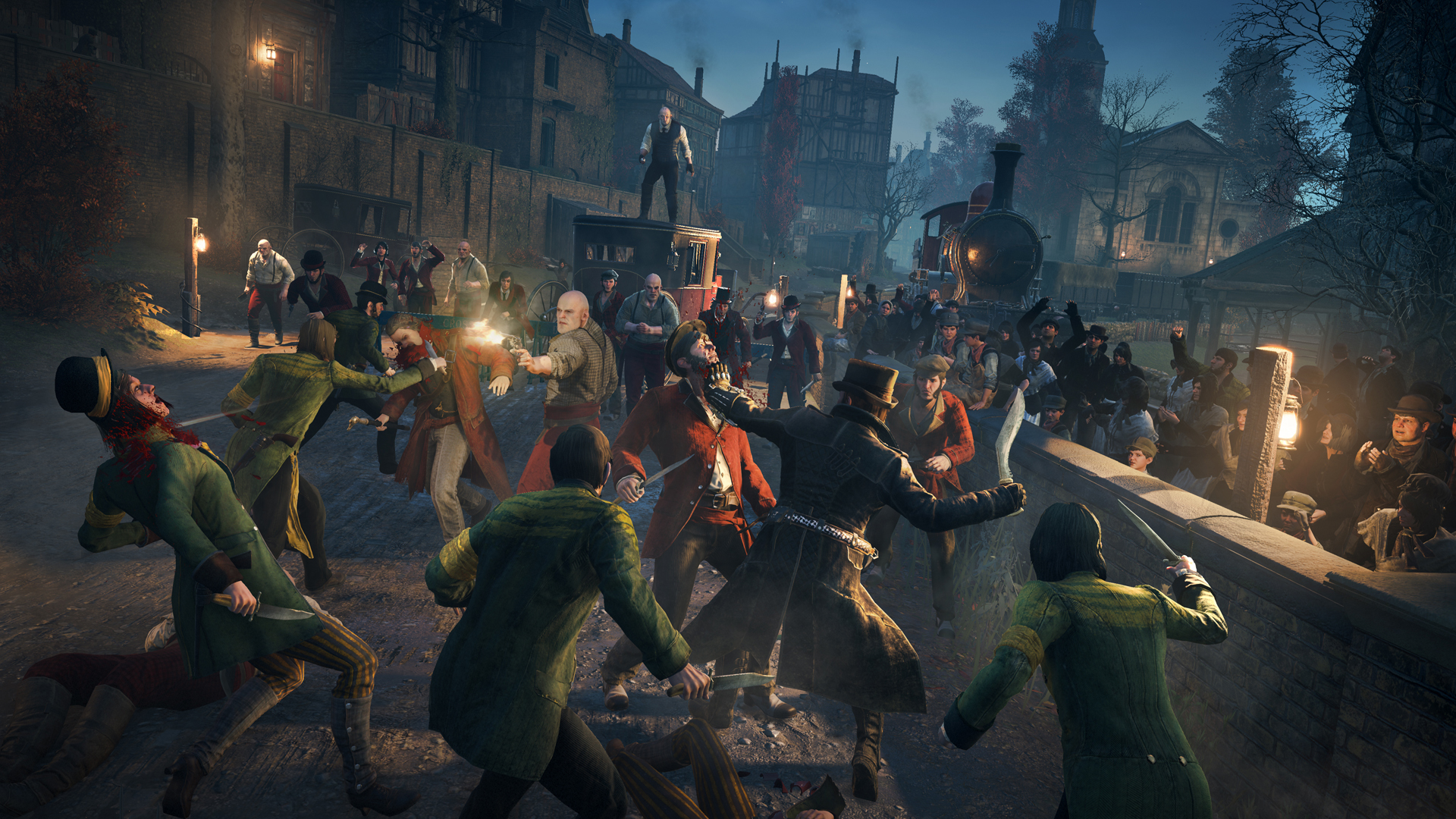 Syndicate offers a number of new mechanics to help with travel and maneuvering. The newest entry in the series introduces usable vehicles. With little effort you can hijack a horse and carriage, which not only gets you around faster, but helps during chases. (Thank god, because I suck at them). They can also be used as platforms to climb, or during stealth for hiding. Carriages aren’t perfect: There were occasional lapses in perspective adjustment when turning, and they aren’t the easiest things to maneuver, particularly when you need to speed up or reverse.

As cool as the vehicles are, the real star addition is the rope launcher. I could write an entire article about how amazing this tool is, and how it should be in every game ever. The Batman-esque zipline is incredibly useful for quickly transporting between a variety of heights, helping with both escape and travel. However, the coolest use of the launcher was for assassinations. If you want to take out a mark from overhead, but there are no buildings close enough, you can launch your rope to another point, stop sliding over your target, and drop down for the kill. No words will fully capture how completely amazing this tool is, or how much I love it. 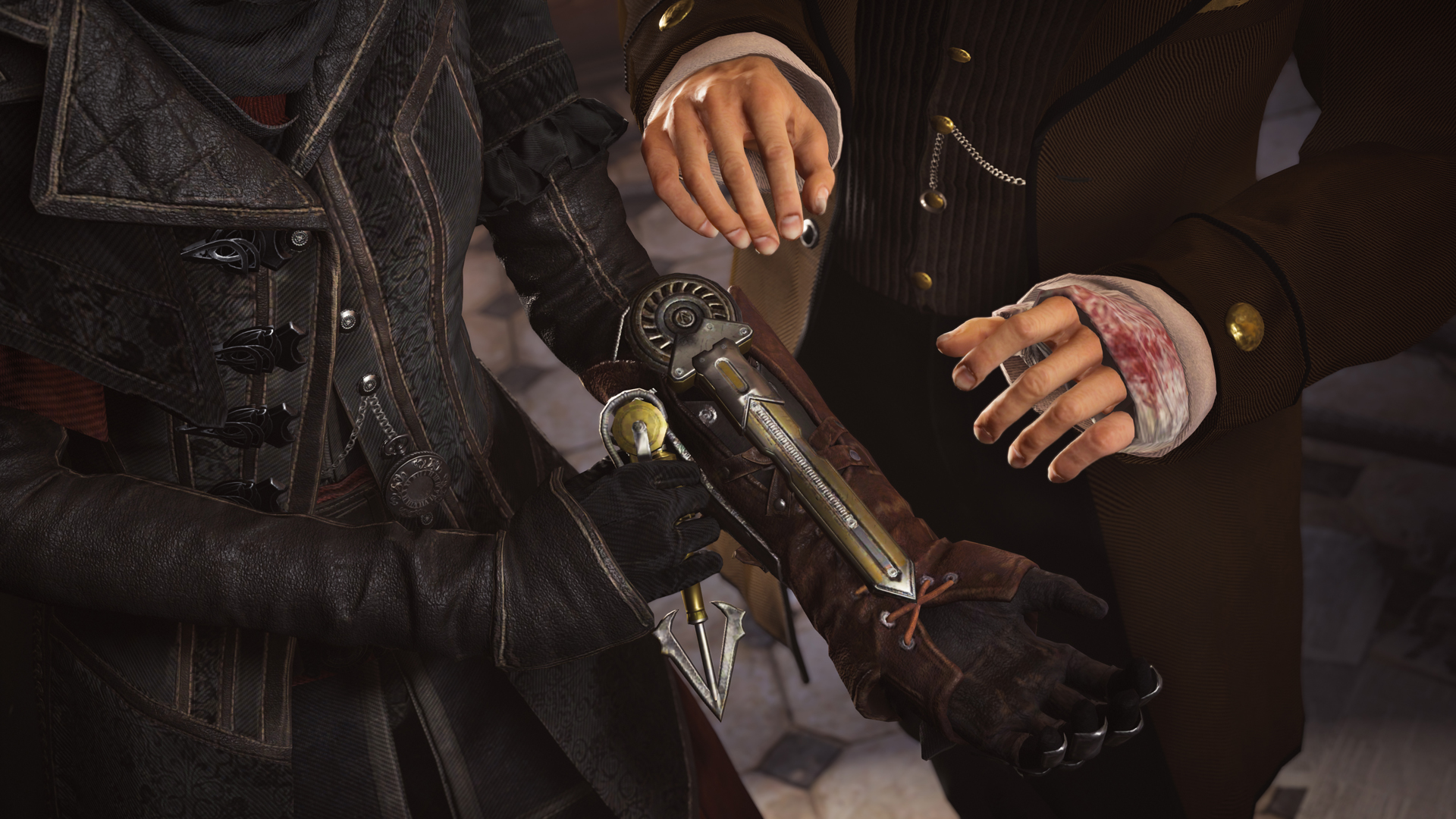 Assassin’s Creed Syndicate is not without its flaws – the game has a small number of clipping issues, and at one point I was forced to restart a mission because the guy I was attempting to kidnap got stuck in the ceiling. As funny as it was to watch, it was frustrating having to replay 10 minutes of slow stealth in order to get to him again – although it was impossible to intentionally recreate this glitch, so I consider this a fluke. There were also occasional lapses in perspective adjustment when turning, especially when operating a vehicle, but overall the issues were minor and didn’t hinder my ability to play the game. When factoring in the fact that Syndicate is crammed with moving characters, vehicles, and boats, and yet there is no noticeable lag present, these minor gripes remain just that – minor.

In addition, some of the quests felt a bit hollow. There were many repeats in missions across London’s multiple boroughs, including ones where you liberate child workers. There were no individual stories or context given across the boroughs, and with the exception of the placement of enemies, they were all clones of one another. Rescuing child slaves could have been a good place to make a player feel something for the people they are freeing, yet once you complete the mission, it’s just over. I would have liked to have seen some of the quests and open world activities individualized a bit more – as one was in the main story sequence, but I won’t spoil that for you.

The biggest issues from Assassin’s Creed Unity, aside from launch bugs, were the absence of a multi-dimensional character and the underwhelming take on the Assassin’s Creed universe – issues that Ubisoft took great care in remedying in the newest entry. Thanks to the era of Assassin’s Creed Syndicate, a number of advanced weapons and features were available to use, making both the combat and stealth gameplay, as well as travel, feel fresh and energized. The protagonists are different, and yet brilliantly complimentary. Despite my few minor complaints, the game managed to make me fall back in love with the Assassin’s Creed franchise – and I can’t wait to play it again.

Bottom Line: Assassin’s Creed Syndicate features a solid campaign, elevated by challenging assassination missions and a spellbinding setting. Syndicate delivers all of the innovations I had hoped to see from Unity, which was the franchise’s first new-generation console entry, as the adjustments to combat, stealth, and travel breathe new air into the series.

Recommendation: Assassin’s Creed Syndicate is a must-play for existing fans of the franchise and new players alike. Ubisoft rebounded from a disappointing title with one rich with narrative, suspense, and discovery.

Mythbusters‘ Upcoming Season 14 Will be Its Last