Where Breaking Bad was largely about Walter White’s journey, Better Call Saul is similarly about a pathetic, ineffective man’s quest to become more than he is (a broke, crappy lawyer). Just as Walt had to become Heisenberg, Jimmy McGill will eventually need to adopt his own persona of Saul Goodman.

Breaking Bad enticed viewers to keep coming back to see just how far Walter White was prepared to go, but we already know what Jimmy will be in six years. To make that journey interesting, McGill’s Bob Odenkirk and the show’s writers are tasked with making Jimmy a compelling and sympathetic character – just not too sympathetic.

In the first episode of Better Call Saul, Jimmy is pathetic, broke, and entirely ineffectual. Everything he does results in failure, and it doesn’t look like he can handle losing too many more battles. But as we start to pity him, Odenkirk brings just enough sleaze to the character to keep us from liking him too much.

There lies the subtle brilliance of Better Call Saul. We know Jimmy McGill is going to end up as something of a villain (or whatever you call someone who casually recommends killing witnesses), but showing just how shitty his life is now helps justify what he becomes in Breaking Bad. The show can never present McGill as an entirely noble character, though. As such, even at his best (trying to help his brother), it’s still all about the money.

Building on the fantastic work of Breaking Bad, Better Call Saul is gorgeous and moody. From the first moments to the final shots, the camera work is engaging and illustrative of the world in which these characters live. Few shows have surpassed Breaking Bad in terms of visuals, and Better Call Saul looks to follow in the same tradition.

Better Call Saul isn’t without its issues. By following so closely in Breaking Bad’s footsteps, it risks alienating some of the original series fans. As Breaking Bad progressed, episodes became increasingly more intense, and it’s easy to forget the series started very quietly and slowly. Better Call Saul kicks off the same way: long minutes without any significant dialogue or big moments.

It’s a fantastic opening and great television, but after all the epic shootouts and fast pacing towards the end of Breaking Bad, some viewers might be bored by so many long, quiet moments.

Viewers expecting something as innovative as Breaking Bad will be disappointed. In fact, with so many parallels to the original series, it’s fair to say that Better Call Saul doesn’t take any risks. Except, of course, risking being just more of the same, but is that really so bad?

Taken on its own, Better Call Saul is brilliantly executed television with beautiful cinematography and a compelling cast of characters portrayed with nuanced acting, largely thanks to stellar work by Odenkirk. As long as Jimmy’s transition into Saul remains intriguing, Better Call Saul could end up being some of the best stuff on TV.

If you missed the premiere, “Uno” will air again tonight (Monday) at 9/8c on AMC. The second episode, “Mijo,” airs immediately after that, at 10/9c, the Better Call Saul’s regular timeslot.

“Managing a Cinnabon in Omaha.”

In the penultimate episode of Breaking Bad, Saul says, “If I’m lucky in a month from now, best-case scenario, I’m managing a Cinnabon in Omaha.” Apparently, Saul Goodman was lucky. The opening of Better Call Saul is a long, black and white sequence of Goodman going through the depressing motions of employment in an Omaha mall’s Cinnabon.

It’s a gorgeous opening that immediately answers a question a lot of fans might be asking: will we see what happened after Breaking Bad? Expect more of these sequences, as the original series was fond of time-jumping as well.

Most of the episode is dedicated to showcasing just how awful things are for McGill. From his hopeless court cases to arguing over three dollars with a parking attendant (Jonathan Banks returns as Mike Ehrmantraut), everything about McGill is pathetic. Most of the show’s dark humor lives here, rather than the outlandish remarks we might be familiar with from Saul Goodman. 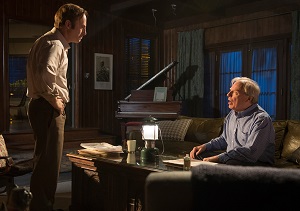 McGill’s older brother, Chuck, makes matters worse for Jimmy. Once a founding member and partner of a successful law firm, the elder McGill is homebound as he can’t be exposed to any electricity. This condition is almost certainly mental and is referred to with a reverence that is surprising to see in television.

This is Jimmy McGill’s most noble story in the premiere but it certainly isn’t entirely selfless. Jimmy says he wants the law firm to cash out Chuck’s portion in order to do what is best for him, but he’s prepared to bring down the entire organization to get as much money as possible.

Surprisingly, the coldest blow to Jimmy comes from his own brother. While the younger McGill is trying to build his own name in the legal world of Albuquerque, his brother recommends he not use the name of McGill. After all, “James McGill” sounds a bit too much like “Hamlin, Hamlin and McGill.” It would seem Chuck is more loyal to his firm than his own brother.

What other connections did you notice? What were your favorite moments or complaints about the premiere? Sound off in the comments!

Bottom line: Better Call Saul is engaging and visually beautiful television. It may not be as innovative as Breaking Bad, but it has the potential to be just as great.

Recommendation: Definitely get on board with this. Even if you never watched Breaking Bad, you won’t be lost at all.

Shocker: Big Cable Among The Most Hated Companies In America