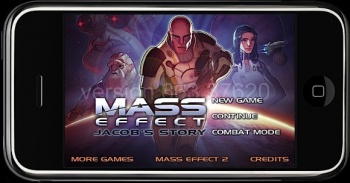 BioWare has tossed out a few details about the upcoming iPhone version of Mass Effect, which was revealed to the public after a focus group tester broke the NDA and blabbed to Joystiq.

Reports of the game came to light last week when a Joystiq reader claimed he’d taken a survey about an iPhone/iPod Touch version of BioWare’s hit RPG, named Mass Effect: Jacob’s Story. He said the game will serve as a lead-in to Mass Effect 2, with a “cartoony art style” and “top-down shooter gameplay.”

BioWare has since confirmed the existence of the game in a forum post by Community Coordinator Chris Priestly. “We were going to announce this,” he wrote, “but one of the testers at a focus testing group broke the NDA (non-disclosure agreement) and things were revealed before we had the chance.”

“The story of the game is not a ‘bridging’ story between Mass Effect 1 and Mass Effect 2,” he continued. “It is a cool little side-story about one of the upcoming Mass Effect 2 characters. It is not ‘required reading’ to enjoy the core trilogy, but if a fun optional ‘extra’ game.”

The game is being developed by a “separate, dedicated team,” Priestly said, emphasizing that the project isn’t drawing resources away from new Mass Effect DLC or patches. “BioWare and the Mass Effect team want to branch out in a number of ways with the ME universe, and this is just one example of such branching out. We think the iPhone and iPod Touch are exciting new platforms for games, and this game was designed for these platforms from the ground up,” he said.

Priestly noted that the information leaked by the tester was just “research” but promised that more information about the game would be released later this month.

Civilization IV Comes Complete In May