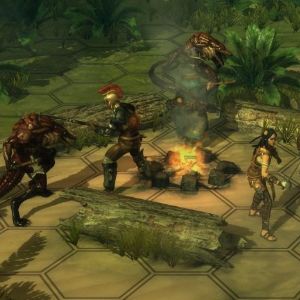 Do you remember the year 2002? Blackguards remembers. It waxes nostalgic for the days of sprawling 40 hour campaigns with intricate sidequests and dialogue trees. It dotes on the tabletop RPG roots of games like Neverwinter Nights – very directly, in fact, because it uses seminal German Tabletop RPG The Dark Eye for its ruleset. Beyond all doubt, in fact, Blackguards will acutely remind you of your friend’s tabletop game: From the thorough character skill trees, bizarre companions, and enjoyable tactics to the stilted dialogue, contrived plots, and swingy combat encounter balance. It’s an RPG players’ RPG, and it’s not making any apologies for that.

At its most base, you spend Blackguards clicking through things. Clicking on different shops in animated portraits of the towns you go in. Clicking through branching dialogue trees. Clicking through travel maps of various regions. It’s a mode of play that’s simultaneously bland and ripe with opportunity for excitement. Most major quests have a branch or two, with a few ways that any given thing can play out based on your personal moral compass – not that there’s any direct mechanical impact for that, given the lack of “morality” meter. You’ll occasionally run into the classic “I didn’t mean THAT!” option in quests, where you click a dialogue you think is relatively innocuous only to shank a beggar in the streets. It’s a peril of the game type: C’est la vie.

It’s all really inoffensive play with a few twists: You have to rest in various taverns, camp in the wilderness, and visit healers to be prepared for encounters ahead. Though the strange thing is there’s never a penalty for doing so, and the game certainly isn’t on a clock. It’s obvious the developers meant for resource management to be part of the game – a tribute to the tabletop RPG roots – but in the end you’ll just be either strapped for cash from buying meat and bandages, or occasionally reloading a save because you forgot to click the “camp” button before going to the next location. Occasionally, the game does throw an enjoyable curve at you in the form of streamlined maps of dungeons or broader areas that you’re in, where each node represents an encounter. That’s when the resource system does shine, because you can realistically be trapped and low on supplies without a simple route of escape.

The heart of the game is the hex-based tactical combat. Hexes, as we all know, are the superior form of grid-based play, and the natural strengths of that tactical system are apparent here. You’ll pay a lot of attention to positioning, trying to maneuver your various combatants into proper spots to do away with villains, all the while keeping them as safe as you can from reprisal. Thankfully, the character creation and advancement are as rich as the game’s heritage should suggest, leaving you with a lot of ways to work the characters you have into a playstyle that works with you. For the less inclined, the game has some pre-built classes with obvious routes of advancement.

Miserably, the tactical richness is completely spoiled in various parts by the sheer repetitiveness of some of the game’s scenarios. While the battlefields are almost always impressively diverse and fun, the enemies you fight tend to drag around the middle of each game chapter. After the seventeenth encounter with identically armed bandits and pirates, you start to desperately skip the sidequests so that you could fight something new. It can grow on a player, though, and by about fifteen hours in the game it stops repeating itself so much. Despite that, every difficulty setting features stark challenge spikes. Some fights seem nigh-on-impossible without a perfect string of 30% chance hits, and others are cakewalks regardless of messy planning or poor tactical planning. 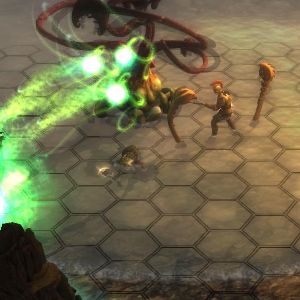 Unlike its combat, Blackguards is and does not become anything to write home about in the graphics, sound, acting, or writing departments. The graphics do the job, with some of the spell animations verging of cool or fascinating – the fire effects in particular are quite impressive. They’re not fantastic, and the textures certainly aren’t top of the line. The music is decent, but after ten hours you’ll probably substitute your own soundtrack for the game’s repetitive town and battle tracks. While the rest of the game feels like a tribute to the early 2000s RPGs, the voice acting feels like it time traveled directly from 2002. It’s too few people trying to do too many accents. Don’t expect wonders there, and do occasionally expect some jaw-droppingly poor delivery.

And, bizarrely, it’s not like the actors had anything truly wondrous to work with. The writing and plotting are fairly disappointing from the studio that brought out the entertaining, humorous world of both Deponia and Torchlight. While there’s a lot of merit to the idea of a dark, gritty, and mature story hinging on drugs, sex, and violence, that doesn’t mean the whole thing has to strike one bland grey note. Blackguards takes place in a grim, humorless, world of unfun things and no jokes. It grates on you. It grates on you all the worse if you know the diverse and fascinating world upon which the game is based – Aventuria – and know that there’s a lot to be done in it. That said, the main characters are enjoyable, and there are more than a few moments of genuine pathos in the story. The world itself is written consistently enough that you’ll experiences some fascinating places and cultures.

Blackguards is an inoffensive and average game. It has great strengths and surprising weaknesses. If you’re like me, you’ll put 40-50 hours into the game depending on what difficulty you’re on or how many side quests you do. Once you put that into perspective of price – $39.99 at launch in the United States – you’re getting really great value for money. It’s a very consumer friendly game for RPG fans, and if you’re not sitting on a huge backlog it’s a worthy investment of time.

In the end, Blackguards feels a lot like the first time I played Neverwinter Nights in all the good ways and all the bad. Take from that what you will.

Recommendation: SRPG lovers and those tiding themselves over until the next BioWare RPG would do well to check out Blackguards.

Bottom Line: Blackguards has its up and downs, but at $40 for 40 or more hours of good gameplay, it’s hard to beat.