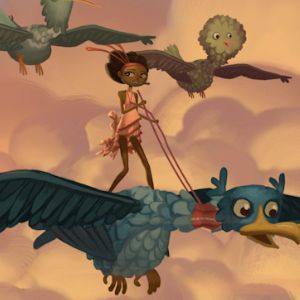 It took us a long time to get here, but Double Fine Productions’ infamous Kickstarter project, once known only as Double Fine Adventure has at last been made flesh. Well … part of it has, anyway. The first of an episodic adventure, Broken Age: Act 1 introduces us to an enchanting world of eccentric characters, crippling tradition, and relatively amusing consequences. Point n’ click adventure gaming has been better, but it’s still damn good to have it back this sincerely.

Broken Age tells two distinct stories that begin to share increasing similarities during the course of the act. Both star youngsters who are bound by the restrictions of tradition, stuck in routines that exist for no other reason than they always have. Vella is to be offered up by her village as a sacrifice to the monstrous creature Mog Chothra, while Shay is trapped aboard a space ship, coddled and fussed over by a domineering computer who acts as his mother. Players get to switch between the two characters at any time, playing through two separate – but somehow connected – struggles to break free of the cycles that keep them held down.

At first, Double Fine appears to be holding the players’ hands a little too much. Early “puzzles” are more like simple busy work, and there’s a lot of repetition and railroading that chugs the story along at an almost rushed pace. However, these establishing scenes soon give way to a game that unfolds at an impressively natural pace, slowly opening itself up and easing players into its strange little world. While there are no mind-breaking leaps of logic – as found in the classic adventure games of yesterdecade – Broken Age settles into a very nice reflection of classic point ‘n click exploits, as players match wits with the world’s colorful inhabitants, pick up items, and combine stuff to solve riddles and overcome hindrances.

Using words like “traditional” and “accessible” to describe Broken Age is to use words that are used far too much to describe most games, but they’re two words that fit very well in this case. Double Fine treads the line between crafting an experience familiar to fans of old fashioned adventure games while welcoming newcomers in a none-too intimidating way. There’s no clicking on random pixels in the hopes of finding an unfairly hidden object, no playing random guessing games to find contrived solutions that no sane person could figure out. With this first act, Double Fine instead strikes a nice balance between the likes of Monkey Island and The Walking Dead – something without enough challenge and interactivity to be considered a “game” by the hardcore elite, but with a firm focus on letting players enjoy the narrative above all else.

Humor has always been a big part of the adventure scene, and the utmost has been done to uphold that heritage. The effort is there, but the execution is sometimes a little hit and miss. There are definite moments that’ll raise a smile, especially with some of the more exotic characters (the cloud cult being a particular highlight), but a few of the archetypes feel a little awkward, and some of the gags fall flat due to equally flat delivery. Nonetheless, the quality voice actors with their confident line delivery do a lot to wallpaper over any cracks in the writing. 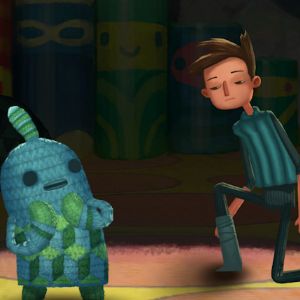 It’s hard to review games like Broken Age, given the terror of spoiling content for those yet to play it. There’s a lot I’d like to say on the nature of the two stories, and the way they play off one another, but we should perhaps talk of that when everybody’s had a chance to play it. I will say, however, that the game begins a little “off” but only grows more and more charming as it develops. Over the course of its near-four hour running time, the plot builds up to a subtle, but beautifully designed, crescendo, with an ending that may very well be one of the finest episode hooks I’ve seen in a game.

I’d be quite wrong not to make note of the graphics, too. The gorgeous art style is reminiscent of a childrens’ book, with bold outlines and painted, patchy colors that make it look quite unlike anything else in the gaming scene. It’s an understated style that only makes it stand out all the more among the explosive, gaudy, or otherwise attention-grabbing titles out there. If graphics could ever be considered classy, Double Fine gets to break out the tuxedos.

There are a few little technical issues at hand, however. Some of the dialog seems to cut itself off, and there are a few moments where the cursor can get a little confused as to where the screen changing prompts ought to be. There’s nothing majorly awful at play, but these few grievances may pop up from time to time and provide a momentary fluster.

Outside of that, Broken Age looks pretty and runs fluidly, and you can’t ask for much more than that!

Bottom Line: Broken Age: Act 1 is all about the slow build. Slow isn’t boring, however, and a wonderful job is done of carefully constructing the pace while keeping the audience amused. It’s a strong start that concludes in a way that makes me desperate for more.

Recommendation: It might not be the explosive debut that years of waiting and buckets of cash could lead one to expect, but it’s a beautiful little adventure game, and I think there are few among us who it won’t appeal to. Make a point of checking it out!