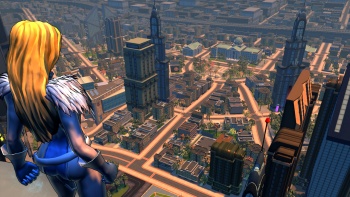 Cryptic Studios’ superhero MMO is the latest to throw its hat (or its cape) into the free-to-play ring.

It seems like an odd and rather unintuitive axiom, but these days it’s starting to feel like the only way for games (that aren’t World of Warcraft, anyway) to make money in the current MMO space is to tell people that you don’t want any. Turbine’s DDO and LOTRO both saw a striking reversal of fortunes after adding a free-to-play option, and SOE seemed eager to follow suit with EverQuest II.

Now, Cryptic Studios has announced that last year’s superhero-based MMO Champions Online will be going free-to-play in early 2011. Anyone can download, install, and play the game all the way to the level cap for absolutely free, says Cryptic – but there will, of course, be a microtransaction store where you can purchase in-game items, costumes, and additional adventures with real-world moolah.

As with EQ2 and LOTRO, Champions will still let players who want to fork over their money every month do so as a “Gold” member, which will unlock “most of the game’s content and [include] extra features.”

Beta testing for the F2P Champions Online will begin in November. Meanwhile, the rest of us can speculate on if it’s actually possible for a major subscription-based MMO game to exist alongside WoW anymore.