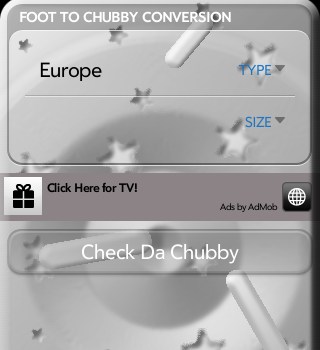 Rock legend Chubby Checker is suing Hewlett-Packard over The Chubby Checker, a Palm OS app that purports to measure the size of a man’s junk.

Believe it or not, there is still a functioning “App Gallery” for Palm WebOS devices, and until September 2012 one of the apps it listed was The Chubby Checker, a handy little program meant to take the guesswork out of determining the size of a man’s unit. “All you need to do is find out the man’s shoe size and plug it in, and don’t worry where you’re from because The Chubby Checker supports shoe measurements of different regions and types,” a cached copy of the app description states. “Now with The Chubby Checker there is no need for disappointment or surprise!”

Handy stuff for sure, but Ernest Evans, better known to the world as Chubby Checker, the singer behind the 1960 hit “The Twist,” is not happy. He’s filed a lawsuit against Hewell-Packard and Palm claiming that people are likely to associate his name, on which he’s held a trademark since 1997, with the app’s “sexual connotation and images,” and that users “are being misled into believing that the plaintiffs have endorsed” the app. The suit demands that HP and Palm halt sales of The Chubby Checker and seeks triple damages of profits derived from sales of the app.

“We cannot sit idly and watch as technology giants or anyone else exploits the name or likeness of an innocent person with the goal of making millions of dollars,” said lawyer Willie Gary. “The defendants have marketed Chubby Checkers’ name on their product to gain a profit and this just isn’t right.”

Despite the excited claim of “millions of dollars,” The Chubby Checker was reportedly downloaded a whopping 84 times before it was pulled from the Gallery; at a buck a pop, that represents actual damages, when tripled, just shy of $260. Nonetheless, Gary is seeking $500 million in his lawsuit – that’s right, a half-billion dollars. HP has not commented except to say that the application was removed from the App Gallery last year.

Rumor: Could This Possibly be the PlayStation 4 Controller?