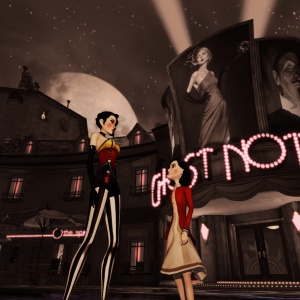 Contrast is a game with a concept that belies the brilliance with which you can deploy it. Games like Portal belong to the same genre at first glance, but instead of relying on puzzles to deliver the majority of enjoyment you get from the game, Contrast instead relies much more on its story to drive the experience home.

In Contrast, you’re dropped into a world of bawdy houses, bars, cinemas, and circuses. Characters are mobsters, singers, magicians, hucksters, and con-men. Everything is a black-and-white, noir-inflected 1920s seen through the eyes of a child. Or, at least, through the eyes of Dawn – the young Didi’s imaginary friend. As Dawn, you have the ability to switch between roaming a 3D world and becoming a shadow on certain brightly lit walls, where you control Dawn like a traditional 2D platformer, interacting with shadows that become solid surfaces. What Dawn does – unlike your garden variety imaginary friend – affects the real world, and so you set out to help Didi as she gets far, far too involved in difficult adult things her parents are dealing with. You do that by solving shadow-based puzzles.

It’s an appealing, if basic, noir-esque story, given a bit of originality by working from the viewpoint of a child. I won’t spoil anything here, because as I played I realized that much of Contrast‘s appeal was actually in what the story was doing as opposed to the gameplay. It’s much more of a fascinating, interactive story than, say, Beyond: Two Souls is – though with lower quality acting and dark, Burtonesque visuals. After a while, I got bored of what appeared to be a stock story, but I stuck with it and was rewarded. Contrast has a few excellent, story twists, including one terrific plot point, that make your first playthrough deeply rewarding.

The basics of controlling Dawn are clear, though sometimes a bit funny. Moving is clean and reactive, and running at a wall full tilt, jumping, and transitioning to a shadow on it just as you would crash in is something that, as far as I can tell, never stops being fun. On the other hand, sometimes you get stuck in a place you clearly weren’t mean to be and can’t move, necessitating a reload. It’s a worthy tradeoff for the kind of freedom to move objects you get, but can still be frustrating. The controls in the 3D world definitely lag behind the shadow world’s clean movements and animations, though. Moving shadow casting objects around can be frustrating, as no matter how lightly you attempt to move them, they appear to move an almost imperceptibly fixed amount. It might seem minor, but not being able to set up the exact angle for a jump you want once you get on the wall can be frustrating. 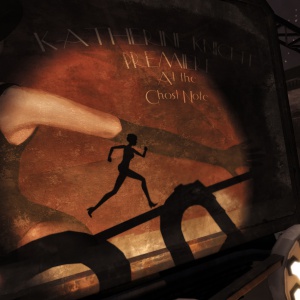 Contrast‘s real failing ends up being as a puzzler, though. While the story is enjoyable and finding the little unlockables that reveal what’s going on in the background is great, the puzzles are simply too easy. I never once had to stop to think too hard about what the next step was, and the only difficult puzzles were difficult because of a hard jump once the shadows were in place for a hard platforming segment. The whole thing, in the end, feels like an extended tutorial for a much more difficult puzzling game. The interactivity of the puzzles really isn’t as much a “puzzle game” as a delivery vehicle for the story. It’s neither good nor bad, but will be disappointing for fans of games like Portal that are expecting a few brain- burners alongside their storytelling.

Bottom Line: While the story is good fun, and the mechanical conceits awesome, Contrast‘s puzzles just aren’t as hard as they need to be

Recommendation: Fans of original, interesting indie games will find a lot to love here, but don’t count on this to scratch your itch for a puzzler.