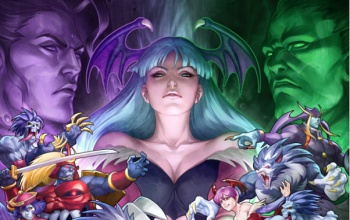 Fighting games, when evaluated by their most stalwart fans, rely very little on the latest, greatest technology. Sure, the big-name developers in the genre – Capcom, Sega and Namco Bandai – do their best to infuse each new release with heavy doses of shiny eye candy, but when it comes right down to it, the most important aspect of a fighter lies not in its ability to attract fans with whiz-bang aesthetics, but instead in how well it handles and how smooth the virtual fisticuffs play out in real time. This is why games like Super Street Fighter II, titles which have existed in roughly the same form for more than a decade, are perennial fixtures at the industry’s most important tournaments. This is also why Capcom is able to re-release the same games over and over again with only slight changes, knowing fans will continue to buy them ad nauseam.

Darkstalkers Resurrection is the latest revivification effort from the House That Ryu Built, and while it features two games that made their initial debut during the Clinton administration, it may be the company’s finest effort in years.

Western territories have never had the same affection for the Darkstalkers franchise as their Japanese counterparts, but the two titles featured in Resurrection (Night Warriors: Darkstalkers’ Revenge and Darkstalkers 3) are undeniably important points in the overall history of the fighting game genre. While Street Fighter has always been Capcom’s pièce de résistance, it’s never been terribly experimental, relying instead of time-honored fighting game tropes and glacial shifts in how each game is approached by players. By contrast, the Darkstalkers games, though only in the limelight for a few short years, introduced new concepts that are still found in most major fighting titles to this day. Air-blocking, block canceling and reversal attacks were all spawned in the crucible of Darkstalkers, and would go on to be popularized by the much more successful Street Fighter Alpha games. Beyond that, each title’s fighting engine is basically what you’d expect from a Capcom title. Hadouken and Shoryuken inputs make up the majority of the roster’s special moves, though Darkstalkers relies much more heavily on colorful graphics and strikingly smooth animation than Capcom’s more popular series. Point being: If you’ve ever played a Capcom-produced 2D fighter, you’ll have no problem jumping right into Darkstalkers Resurrection and picking up the basics immediately.

As with 2011’s Street Fighter III: 3rd Strike Online Edition however, Capcom has learned that there’s good money in gussying up its classic titles with a host of modern accoutrements. Darkstalkers Resurrection maintains almost every gameplay aspect found in its arcade predecessors, but slathers the entire package with a huge number of bonus extras. Not only do you have a vast number of aesthetics options, allowing players to customize their viewing experience to an insane degree – devotees of the traditional CRT monitors found in quality, old-school arcade cabinets will be happy to know that they can switch on surprisingly well-emulated scanlines – but the game also presents a number of options that no one would have missed had they been absent. Want to play Resurrection as if you were standing off to the side of a cabinet in a smoky arcade? That’s absolutely possible. Want to stretch the screen, thus totally ruining the games’ original aspect ratio? You can do that too (though I have no idea why you’d want to). 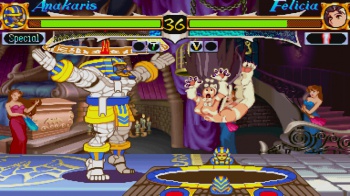 The most impressive improvements in Darkstalkers Resurrection have been applied indirectly to the overall gameplay experience. When you fire up your first match, whether it be in the game’s single player arcade mode, or the surprisingly lag-free online multiplayer, you’ll find a number of “Awards” plastered along each side of the game’s viewing area. These awards both provide players with something more interesting to look at than the standard, black letterbox columns necessitated by modern HDTVs and give players tangible, immediate feedback on how well they’re performing in combat. One such goal requires the player to throw an opponent five times. Not only does this ostensibly teach players the importance of throwing, it also awards experience points, which can then be redeemed in the Vault, a repository filled to the brim with a huge number of bonus material including ending cinematics, concept artwork and even the original High Score tables found in each game’s initial arcade incarnation. On top of all of this, Resurrection even includes an option to link the game directly to an extant YouTube account, allowing particularly talented (or vain) players the opportunity to upload match footage directly to the web. Was this purely necessary? Not at all, but I’m glad to see Capcom going to such lengths to cover all of its possible bases.

Despite these extras, fighting games live and die on the strength of their gameplay, and in that regard, Darkstalkers Resurrection is a shining example of how to properly fashion a 2D fighter. Movement is crisp and responsive, characters animate as fluidly as one could possibly hope, and while I won’t argue that either of the games in this package are the most balanced titles Capcom has ever created, they’re designed well enough that if you lose a match, it will never be the result of the game screwing you out of a victory you truly earned. Success relies entirely on your reflexes and grasp of game mechanics, making either of the titles in Resurrection perfectly suited for mid- to high-level tournament play.

The highest compliment I can possibly pay Darkstalkers Resurrection is that to date, it stands as the pinnacle of Capcom’s efforts to revive its many beloved classic franchises. When the company finally gets around to remaking the Street Fighter Alpha series for the Xbox Live Arcade and PlayStation Network, I can only hope that it builds on its latest success in much the same way as Resurrection built on the many positive aspects of Street Fighter III: 3rd Strike Online Edition. Further, I’m keeping my fingers crossed that other developers take cues from Capcom and realize that Darkstalkers Resurrection offers a master’s course on how to revisit classics from the 1990s and make them both aesthetically and functionally palatable for today’s modern audience.

Bottom Line: Darkstalkers Resurrection isn’t just a re-release of two classic fighting games, it also stands as the best example to date of how to revive games from the 1990s on modern gaming hardware.

Recommendation: If you have any interest in virtual fisticuffs, buy Darkstalkers Resurrection. Even if you don’t, I recommend buying the game to support Capcom’s efforts to revive classic games in a proper, respectful fashion.