While lucid dreaming my way through a seemingly inescapable nightmare in DARQ, the debut title from Unfold Games, I was initially struck by its kinship to games like Tarsier Studios’ Little Nightmares and Playdead’s Limbo and Inside. DARQ is dripping with atmosphere and clever puzzles, adroitly telling a surprisingly nuanced and macabre story without relying on text or dialogue. But it’s DARQ’s novel approach to puzzles and platforming that really sets it apart.

The first thing that jumps out at you likely won’t be one of DARQ’s freakish antagonists, but its creepy, Tim Burton-esque aesthetics. Though there are some tense moments and a few jump scares, the horror elements mostly come from unsettling surrealism. The use of grayscale, soft lighting, and muted colors masterfully set the mood for DARQ’s core premise: A boy named Lloyd knows he’s having a nightmare, but he can’t seem to wake up.

DARQ is more than just a pretty face. As I navigated Lloyd through seven distinct chapters of increasingly diabolical mindscapes, the puzzles I solved were mostly satisfying, thoughtfully designed, and logical. Some puzzles are action-based and timed, while others are more contemplative. This may sound typical, but Lloyd’s ability to manipulate and traverse his dreamworld in atypical ways elevates DARQ beyond puzzle game standards.

DARQ isn’t a platformer in the traditional sense. Lloyd’s ability to jump is contextually based, not mapped to a button. Instead, he must walk on walls and ceilings to progress. Lloyd can only move on a 2D plane at any given time, but there are devices and levers in the environment that enable him to lurch into parallel 2D planes or even rotate the environment to walk on a different axis.

This makes environmental exploration a treat, and the game’s best puzzles utilize the pseudo-Escherian design to great effect. One of my favorites involved chasing electric current through a cable that snaked across the walls, ceiling, and floor of a train car interior. Using levers, I rotated the train to frantically locate and grab gaps in the cable, acting as a human electrical bridge so that the current could proceed to its destination.

The game isn’t without its faults, but they feel more like rough edges than real problems. There are a couple of chase sequences that aren’t well-matched to the gameplay mechanics, plus some lackluster stealth segments devoid of any palpable tension. The timed puzzles got my heart racing more than the relatively infrequent stealth and action bits. There are also some hidden dream journal pages to find, though they don’t actually yield any additional story information, which seems like a missed opportunity. They’re hidden in clever places, but there’s no need to hunt them down unless you want the Steam achievements.

DARQ is mostly well-paced. It took me less than a couple of hours to reach the conclusion, though the puzzles made me feel smart for solving them and none of the game’s self-contained levels ever overstayed their welcome. Yet hours later, something about DARQ was still eating at me. Although the game presents a relatively definitive conclusion, one of its most fascinating (and less obvious) puzzles is piecing together the game’s surreal imagery to deduce what might have happened to Lloyd in the real world — a place the player never actually gets to see. 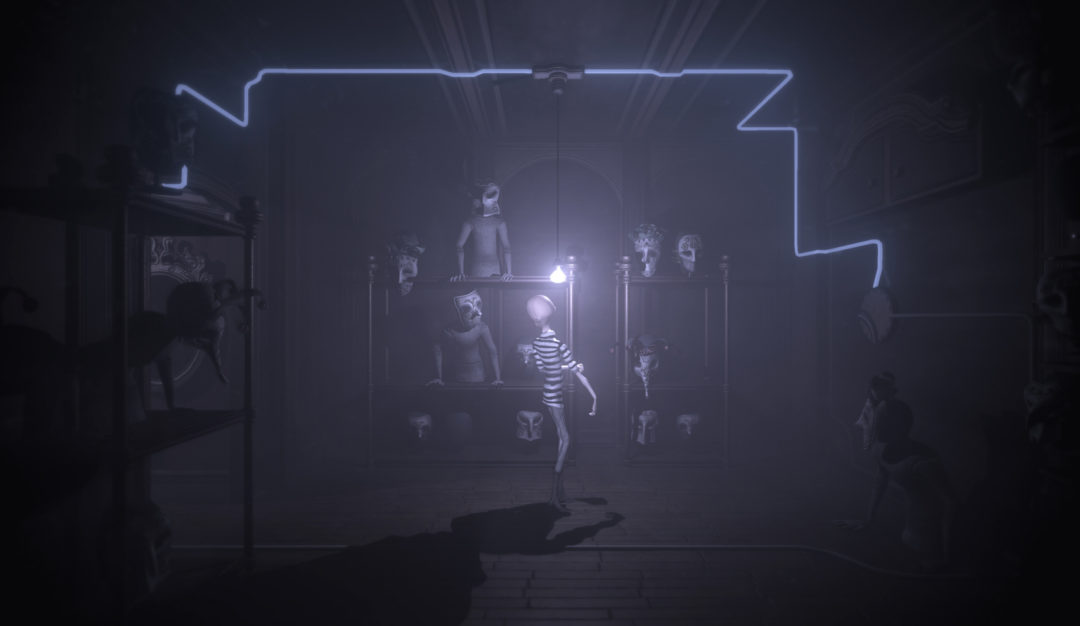 On my second playthrough, I tried to approach the game from the perspective that everything in it comes from Lloyd’s subconscious. As it turns out, DARQ uses common conceits of dream symbolism and interpretation to flesh out important elements of its backstory. Some of this symbolism is relatively obvious on its face. Lloyd’s striped shirt is reminiscent of old penitentiary uniforms, likely reflecting the feeling of being imprisoned in his own mind. Why is he so nervous, sunken-eyed, and emaciated? Answers seem to be there, if you pay attention to the details and apply a few spoonfuls of cognitive dream theory.

After a bit of research, even the more obscure elements turned out to be symbolic hints at the meta-narrative. There are numerous nods to time (clocks, watches, timed puzzles), masks play both practical and metaphorical roles, and there are numerous symbolic references to concepts like losing control and uncertainty. The game then pushes back against this motif by tasking the player with exerting control over the dreamworld and its physics to solve puzzles. Severed limbs must be used to operate strange devices in order to proceed, converting something that symbolizes helplessness into a tool.

Ultimately, I really enjoyed my time with DARQ. It’s surreal, dreamlike aesthetics pulled me in. The clever puzzles and exploration kept me interested throughout, due in no small part to the wall-walking and level manipulation present at every turn. I didn’t expect that putting the game’s symbolic clues together would give the story additional context and impact that wouldn’t fully sink in until after the credits rolled. And although the journey ended a bit too quickly, DARQ still stands out as a great piece of unsettling interactivity. It’s a delicious bite-sized game perfect for a spooky fall afternoon.