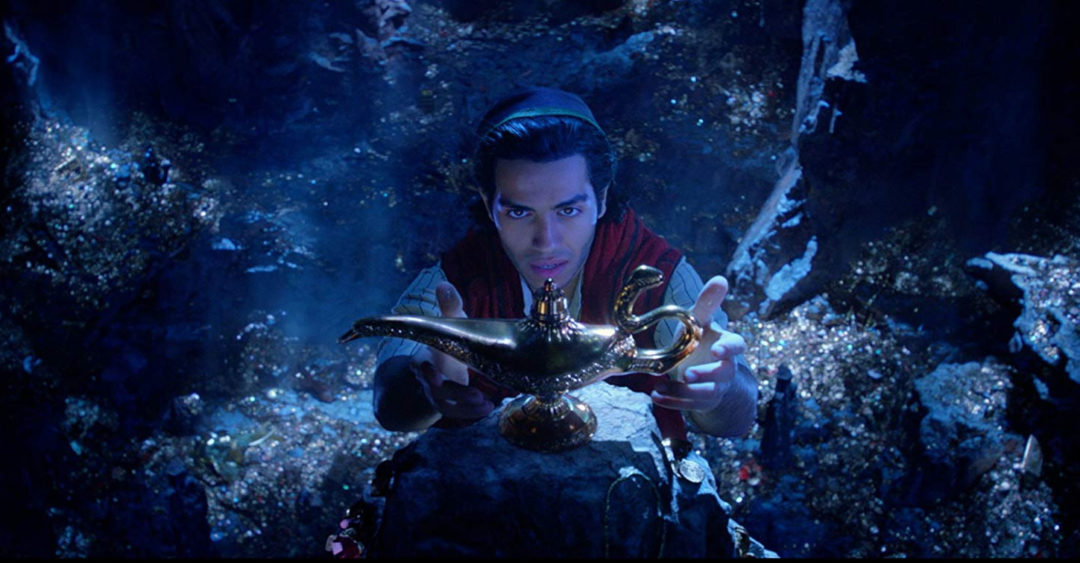 Disney’s “live-action” adaptation of The Lion King will be opening next weekend, and by all accounts it looks to be a spectacular success. Even following the studio’s quiet efforts to scale down projections following the box office “disappointment” of Toy Story 4, it looks like the film will take a sizable chunk out of the box office. This is especially impressive in the context of what has been an underwhelming summer at the box office.

Disney looks set to take in $9B at the global box office this year. There are a number of different factors driving that result. Most obviously, the Marvel Cinematic Universe continues to be incredibly lucrative, even if Avengers: Endgame may narrowly (and perhaps only temporarily) fail to break the record set by Avatar 10 years ago. Animated feature films like Toy Story 4 and Frozen 2 will provide impressive returns on investment. However, the studio’s live-action adaptations of its beloved animated canon will also play an important part.

Of course, “live action” here is something of a disingenuous descriptor, hence the decision to include it in quotation marks in the opening paragraph. After all, most of the cast of The Jungle Book and The Lion King are computer-generated. In fact, The Lion King was notably shot in virtual reality. Most of Alice in Wonderland and Alice Through the Looking Glass were computer-generated. Even the central characters of Pete’s Dragon and Dumbo are the product of computer rendering.

It may be fair to argue that these films represent a different kind of animation, rather than describing them as “live-action” adaptations. Nevertheless, it is an effective shorthand for distinguishing this wave of remakes from the films that inspired them.

In any case, this wave of remakes really kicked into high gear with Tim Burton’s Alice in Wonderland, released in early 2010. The film earned a billion dollars worldwide on a $200M budget, which was enough to mark these adaptations as viable to the studio. Alice in Wonderland was recognizable as an adaptation of the animated classic, but it was also very much a Tim Burton film, infused with the director’s Gothic sensibilities.

In the years that followed, Disney commissioned a number of live-action adaptations that tilted at these stories with varying degrees of originality. Maleficent told the story of Sleeping Beauty from the villain’s perspective, earning $758M worldwide. Kenneth Branagh’s Cinderella was a little more faithful but still fleshed out its characters, earning $543M.

The year 2016 proved decisive for the studio’s attempt to capitalize on its back catalogue. Two of these adaptations were released: Jon Favreau’s The Jungle Book in April, and David Lowery’s Pete’s Dragon in August. The Jungle Book was a relatively faithful adaptation of the beloved animated classic, carrying over characterization (and even a handful of musical numbers) from the earlier film rather than returning to the source material for inspiration. (Andy Serkis’ much-troubled and long-delayed Mowgli would draw more heavily from the work of Kipling, to very mixed and very interesting results.)

In contrast, Pete’s Dragon was a more complete reworking and reimagining of the original film, changing the tone and the story, along with the design of the creature itself. To be fair, a lot of this freedom came from the choice of source material. The original animated Jungle Book is a classic of animated cinema, almost universally beloved, and so any major shifts or changes would be met with scrutiny. In contrast, very few people cared about the largely forgotten 1977 live-action/animation hybrid that had inspired Pete’s Dragon, allowing the film greater creative freedom.

Naturally, The Jungle Book was a runaway success. It earned $966M worldwide on a $175M budget. By way of contrast, Pete’s Dragon earned only $143M on a $65M budget. The following year, an incredibly faithful live-action adaptation of Beauty and the Beast earned over $1.2B at the global box office. It became the highest-grossing film of the year.

There was a clear box office trend, favoring the more overtly “faithful” adaptations of the animated classics over more adventurous or creative approaches to retelling these familiar stories. Notably, despite launching the trend, both of the notable recent disappointments within the subgenre can trace their roots back to the live action reimagining of Alice in Wonderland.

The sequel to Alice in Wonderland, James Bobin’s Alice Through the Looking Glass, underwhelmed at the global box office, earning less than a third of the total gross of the previous film. Burton’s reimagining of Dumbo — which radically reworked the plot, introduced entirely new characters, and added a villain who was a thinly-veiled stand-in for Disney — only took in $350M worldwide. By way of contrast, Guy Ritchie’s more faithful adaptation of Aladdin is currently hovering around the $920M mark worldwide.

Taken together, these figures reinforce the suggested trend. Disney appears to be pushing these adaptations towards more faithful recreations of the original animated films. The Jungle Book, Beauty and the Beast, and Aladdin all feature songs from the original animated films, along with similar character designs and plots. The teaser trailer for the upcoming Lion King adaptation was drawn shot for shot from the animated movie that it was adapting. In some ways, this ties in with broader trends in popular culture as mainstream entertainment grows increasingly nostalgic and draws from increasingly beloved properties.

Modern fandom is obsessed with “fidelity” as a measure of an adaptation’s worth, as if the best thing that a movie can be is faithful to its inspiration rather than good in its own right. Consider the debates of “the canon,” or the fixation on whether Hugh Jackman would ever wear Wolverine’s comic book costume, or the emphasis that Denis Villeneuve has placed on the faithfulness of his pending Dune adaptation.

The problems with this approach are obvious. Hand-drawn animation is a completely different medium than live action, even verisimilitudinous computer-generated animation. Hand-drawn characters can be more anthropomorphic and can behave in ways that computer-generated objects approximating the real world cannot. This is obvious not only with the animate household objects in Beauty and the Beast, but with the Beast himself. The computer-generated character is far less expressive than his animated counterpart because his dimensions and his movements are dictated by real-world physics and biology.

The eyes of a hand-drawn character can expand or contract to convey the emotional reality of the scene, their features heightened and distorted to more clearly communicate their emotional state. In contrast, more grounded and nominally “realistic” animated characters are more restricted. This is obvious with animal sidekick characters like Iago or Rajah in Aladdin, which are robbed of any distinct character in order to resemble “real” parrots and tigers.

It should be noted that it is possible to use computer-generated animation to approximate this sort of exaggerated expressiveness. Pixar’s animation does it all the time, allowing their figures an elasticity that would be impossible in real space; consider the ragdoll physics of Toy Story or The Incredibles, or even the slapstick of Wall-E or Up.

It is even possible to translate this approach into a computer-generated/live-action hybrid. Although the decision to give Pikachu fur was controversial, a large part of the visual appeal of Detective Pikachu was the film’s willingness to let its monsters appear cartoonish with exaggerated features and unusual textures.

On that note, it’s worth contrasting the audience’s response to Detective Pikachu with the revulsion to the attempted verisimilitude of the title character in the first trailer for Sonic the Hedgehog. The sassy blue rodent might have traveled from the Green Hill Zone, but he landed squarely in the uncanny valley.

Films like Beauty and the Beast and Aladdin attempt to combine verisimilitude with fidelity, and the results are distracting and disorienting. This is most notable in the decision to port over some of the song-and-dance numbers, but without the literalism that is possible in animation.

To pick one obvious example, the opening song in Aladdin, “One Jump Ahead,” includes the line, “One jump ahead of the hit men. One hit ahead of the flock.” In the animated version, as Aladdin is singing this, he dances through a flock of sheep. It serves to justify the mixed metaphor in the lyrics. However, in the live-action version, such a stunt is not workable.

However, the song-and-dance number preserves the line. The song feels clumsier as a result, and the entire sequence feels less dynamic. Despite the fact that Beauty and the Beast and Aladdin both add about 40 minutes of story to the original cartoons, they also take away a lot. The animated versions of Beauty and the Beast and Aladdin were specifically designed to play to the strengths of hand-drawn animation as an art form. Those strengths cannot be replicated perfectly in live action, so attempting such a literal translation into live action inevitably creates an inferior imitation. Live action has its own strengths as a medium, and it would make more sense to play to those.

There is no small irony here. Many of those original beloved animated films were themselves adaptations, whether of books, of folktales, of other films. However, those animated adaptations often changed and reworked the source material, understanding that the basic ideas could be successfully reimagined for another medium; translation is as much an art as a science. The storytellers and animators understood that they were telling these stories for a different audience, in a different form, with different strengths and different weaknesses. The Jungle Book is radically different from Rudyard Kipling’s original stories.

The Little Mermaid is utterly unlike Hans Christian Andersen’s source material. Part of the reason why these animated classics found such a strong audience, and resonated so profoundly with the people watching at home, is because they were different from the stories that inspired them. They were still recognizable as the basic stories, but for a new generation. In contrast, these more recent reimaginings feel more like faded photocopies of a bright and vivid original instead of existing as bold works in their own right.

Of course, it may be too early to tell. There are plenty more of these Disney live-action adaptations on the slate — Lady and the Tramp, The Sword in the Stone, The Little Mermaid, Pinocchio, The Hunchback of Notre Dame, Lilo and Stitch. Maybe some of these will find their own voices. Although only a teaser, the first look at Mulan is at least promising in this regard.

Note: This article has been updated to clarify that Alice Through the Looking Glass was directed by James Bobin rather than Tim Burton.

Cyberpunk 2077 Will Be Beautiful on Consoles, Not Just PC, Says CDPR