Sucker Punch, opening in the U.S. today, is a movie about dreams – about the need for fantasy and imagination, as tools to process difficult aspects of real life and even ways to escape from real life. Movies about dreams have always been a popular subgenre, and here are five of the best.

NOTE #1: Inception isn’t on here because it’s not even a year old and everyone already knows about it. Everyone.

NOTE #2: [insert-any-of-a-thousand-Anime-titles-here] isn’t on here because Anime looooooooooves dream stories, and I only have so much space.

Everyone seems to have forgotten that this ever existed – even at the time of release, its biggest infamy came from being the second film to receive the PG-13 rating (after Red Dawn.)

It’s one of many would-be star vehicles for actor Dennis Quaid, who had to wait a long time to have big-time starring hits to call his own. Here, he’s a psychic conscripted into what he thinks is a scientific endeavor to use his and other psychics’ abilities to treat mental disorders by entering patients’ dreams. When he discovers the project’s real intent is to develop the technology to carry out political assassinations using nightmares, he rebels.

The premise is a lot of fun, but the limits of budget and mid-80s FX technology don’t permit for the dream sequences to look or feel much different from other interchangeable sci fi/fantasy films of the same period. It’s a good watch, though – and makes a nice lightweight counterpart to the similarly-themed, but grimmer, Inception.

According to the book Superman vs. Hollywood, and show business lore in general, Christopher Reeve – nervous about the effect that his impending mega-fame as Superman might have on his still-young career – is said to have cornered then-former 007 Sean Connery at a party to ask his advice about typecasting. According to the story, the advice went something like this: “… if it is a hit, then find yourself something completely different to do right away.” That Reeve immediately followed the international superhero blockbuster with this bizarre time-travel/romance hybrid is often taken as evidence that Connery’s advice was taken to heart.

Based on a Richard Matheson book, Time is one of the standouts of the small subgenre of romantic melodramas that use sci fi/fantasy elements as a means of rendering the requisite doomed romance … well, doomed (see also: The Time Traveler’s Wife.) Reeve is a present-day playwright who falls in love with the photo of a woman from 1912, whom he believes he also met as an old woman the night before she died (it’s complicated). He attempts to use a technique involving dreamlike self-hypnosis to travel back to her time.

It’s a truly odd film – many people can’t get past trying to work out the mechanics of the time-travel-dream-hypnosis angle – but it has a fiercely devoted fanbase, and if nothing else offers up a refreshingly unconventional extension of what the sci fi/fantasy genre can be expanded into. 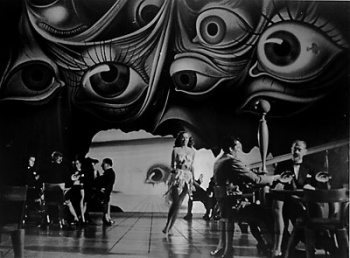 One of the most famous and successful Hollywood directors of the time. Two of the biggest stars in the world. Teaming up to make a big, studio-supported film about the virtues of psychoanalysis. Built around dream sequences designed by one of the then-leading voices in Surrealist Art. Try to imagine that happening in the studio system today.

Alfred Hitchcock directs, Gregory Peck and Ingrid Bergman star, the plot is your basic whodunit murder mystery with a (then-revolutionary) mind-bending twist: She’s a psychoanalyst, he’s an amnesiac drifter who may or may not be guilty of (or witness to) a murder. The truth seems to lie in his (Peck’s) recurring nightmare – a seeming jumble of bizarre symbols that the hero analysts must interpret in order to solve the crime. The dream sequence itself was designed by none other than Salvador Dali, and is easily the high point of the film.

Of all the movies on this list, Brazil is probably the closest thematic cousin to the aforementioned Sucker Punch – I refuse to believe that both films prominently feature a gigantic, cybernetically-augmented samurai-monster as nightmare manifestations.

Directed by “American Python” Terry Gilliam, this is a dark sci fi/comedy set in a crumbling near-future police state run by a ruthless yet comically inept beaurocracy (fans of Futurama‘s Hermes-centric episodes will feel right at home) that justifies oppression as part of an endless struggle against vaguely defined “terrorists” whose ranks seem to include everyone from random street bombers to Robert DeNiro as a vigilante unlicensed air conditioner repairman.

Sam Lowry (Jonathan Pryce) is a low-level member of The System, who contentedly lives out his days in his modest job by escaping into dreams – where he imagines himself as a winged knight (it’s that kind of movie) protecting a beautiful woman from monsters and disasters. But when he encounters a real woman who bears a striking resemblance to the one from said dreams, he discovers the ambition to move up in the world in order to track her down. Unfortunately, she may or may not be one of “them,” and … well, you get the idea.

The film was the subject of an infamous clash of wills between Gilliam and the film’s producer, who insisted on re-editing it to remove much of the dream sequences and undercutting the pitch-black finale. Gilliam won, largely by taking the fight public and holding his own screenings, but may have done so at a karmic price: Labeled “trouble” by studios ever since, he was the most setback-plagued major filmmaker in the business for decades – though lately bad luck prone Guillermo del Toro seems to have taken his place.

Eternal Sunshine of the Spotless Mind (2004)

Jim Carrey is a guy whose response to a bad breakup is to undergo an experimental procedure whereby all traces of his ex-girlfriend (Kate Winslet) are erased from his memory, but as he maneuvers through his own dreamspace during the erasing process, he realizes that he does want to save some of those memories, and dives through his own psyche trying to find places to stash them.

It’s a hell of a premise, the perfect playground both for its stars’ sensibilities and director Michel Gondry’s unique style. To this day, just shy of a decade later, it remains a career highpoint for everyone involved.