The Man With The Iron Fists, a violent tribute to the Golden Age of martial-arts films that marks the directorial (and lead acting) debut of The RZA, best known as the founder and nominal leader of seminal New York hip-hop collaboration The Wu-Tang Clan, opens today in theaters nationwide. At the time of this writing, it had not been screened for critics, but the film’s producers allowed myself and other Boston-area journalists the opportunity to sit down for an interview with The RZA himself. The following quotes are taken from said interview.

“It could be because at the time martial arts films came to the U.S., hip hop culture was being born. For me, martial arts films gave me a way to escape myself – my poverty. It was the place I went and I was in a whole other world. Think about Grand Master Flash – a name we use. Wu-Tang, of course. Ghostface Killer is right from a movie. Old Dirty Bastard is right from a movie.” – The RZA, on why hip hop and martial arts culture are such a surprisingly good fit with one another.

Born Robert Fitzgerald Diggs – as in Robert Kennedy and John Fitzgerald Kennedy – The RZA was grew up in Brooklyn, New York and spent much of his youth living with family in Pennsylvania and later North Carolina. According to his own backstory, now a thing of legend in the annals of hip hop history, among the few positive constants of his early life was his love for the classic martial arts films of Hong Kong and China. At the time, these films were a familiar fixture of smaller movie theaters located in economically disadvantaged urban neighborhoods.

“The villain with the white hair … he always shows up [in classic kung-fu movies]. It’s funny, the film’s producers … they didn’t get it. Did not get that character, like … ‘Who the f*** is this guy?’ They didn’t know. But I’m all … ‘Listen, this is part of the genre. There’s always this guy that just pops the f*** up.'”

There’s no exact reason as to why a generation of underprivileged, (mostly) African American youth like The RZA grew up fixated on the mythology of kung fu movies. For some, it’s the simple fact that they were among the most action-heavy material that independent theaters in what are now euphemistically called “urban” neighborhoods could afford to book and show. But others have suggested a more romantic notion, in that the martial arts genre’s recurring stories of downtrodden commoners studying secret techniques to strike back at institutional corruption resonated with them on a level that transcended the occasionally laughable presentation of the films themselves. Whatever the truth is, the phenomenon was real and these films had few students as dedicated as The RZA, who not only memorized the names of his favorite actors, filmmakers and characters, but absorbed the themes and trappings of the films themselves into a complex personal philosophy.

“Quentin [Tarantino] came to the set, which was an honor … to have my mentor there. And to have him say, ‘You’ve captured the authenticity of all the old kung fu films.’ That was … whoa.”

So when he re-emerged in New York as a talent to be reckoned with during the hip hop of explosion of the early 90s, The RZA approached the medium in a manner just slightly askew from other “name” acts of the time. Assembling a crew of friends and associates including future genre luminaries like Raekwon, Method Man, Ghostface Killah and the late Ol’ Dirty Bastard, The RZA formed a hip hop collective that mixed the superficial elements of the ascendant “gangsta” movement with an undercurrent of urban warrior philosophizing culled from the melodramatic mythology of RZA’s beloved kung fu movies. From there, they also took a name: The Wu-Tang Clan.

But The RZA’s ambitions extended beyond music. He found his way to Hollywood, and where other hip hop stars aimed for action and comedy roles, RZA again took a different path. He built up a resume of interesting work with underground iconoclasts like Jim Jarmusch, indie auteurs like Quentin Tarantino and Eli Roth (who produced and helped direct Fists) and big-time legends like Ridley Scott – all of whom he studied while on set, intending to learn filmmaking from the masters hands-on. 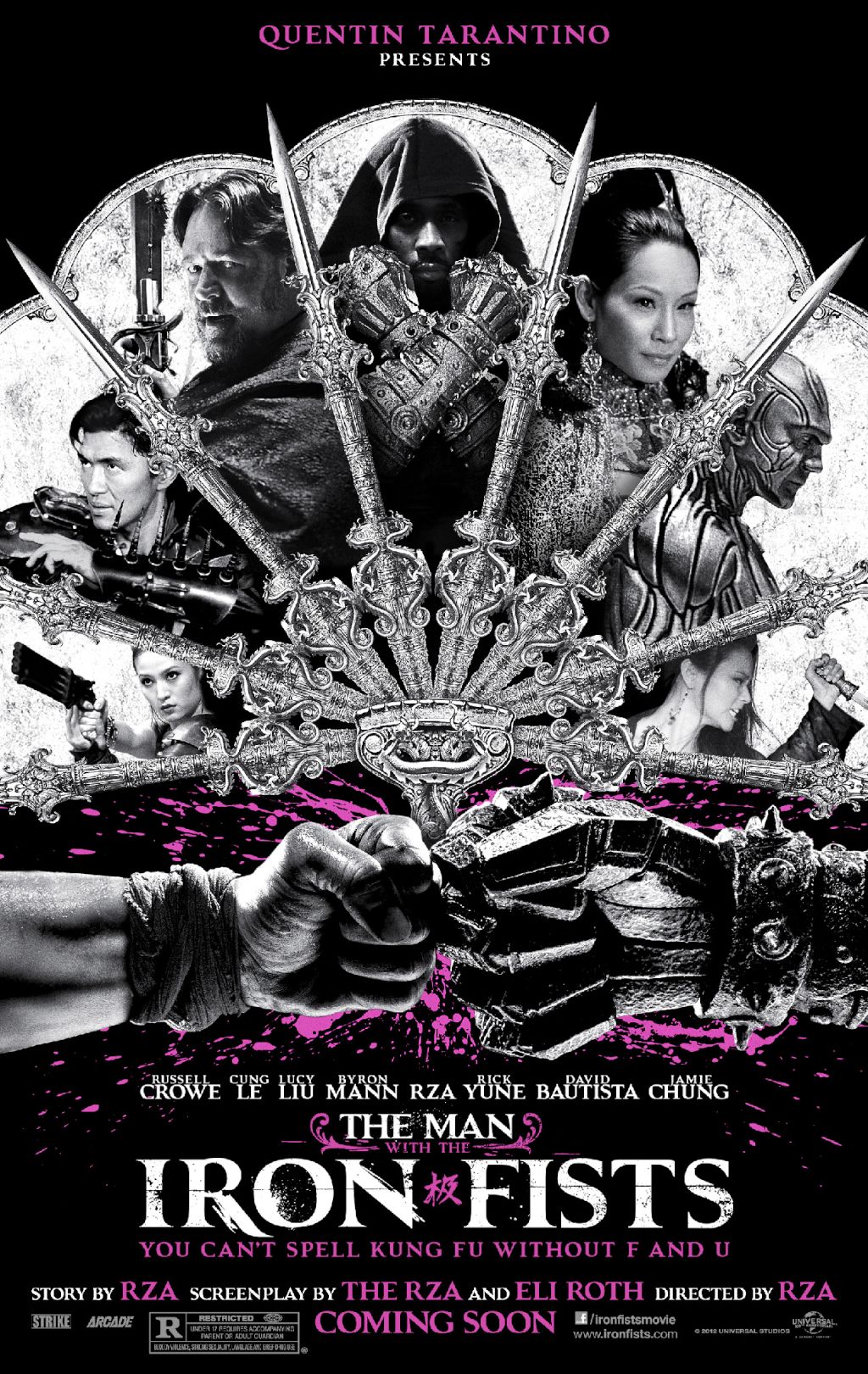 One wouldn’t typically think that filmmakers like Scott or Jarmusch would influence a future director of ultra-violent kung fu tributes.

“Jim Jarmusch would do a [camera] shot and then hold on it … and your mind starts to drift, when you watch a Jim Jarmusch film … and the dialogue is so powerful even if there’s no action going on you feel it.”

All that studying has now yielded The Man With The Iron Fists, an homage to tournament fighting epics like Master of the Flying Guillotine for which he has written the story, created the characters, directed and stars as “The Blacksmith” – who also happens to be the metal-appendaged fighter of the title.

“From Ridley Scott I learned the concept of ‘multi-vision.’ I dunno if you know this, but Quentin shoots with one camera. Just one. Eli Roth uses two cameras. Ridley uses eighteen cameras. On American Gangster he had so many cameras just for dialogue. The guys working the monitors … even they didn’t know, and Ridley we be like ‘This here, this over here.’ And that concept clicked in my head: Damn, he’s got multi-vision!”

Whether or not The RZA’s education has yielded a great filmmaker remains to be seen, though he’s certainly not without confidence. To hear him tell it, wrangling a diverse and intimidating cast of international movie stars is familiar territory for the man who had to mediate the infamous clashing egos and dueling tempers of the Wu-Tang brotherhood.

“I honestly felt that, working with the Wu-Tang Clan … that’s nine people with very strong personalities, and that prepared me for this sh*t. When you make a movie you become a family for a minute, but don’t everybody like everybody else all the time in a family. So an actor comes up like, ‘If ______ says one more f***ing thing …’ – fighters, y’know, they got this energy, start having a rivalry and I’m like ‘Damn, this is just like dealing with Method and Raekwon!’

Though, as it turns out, the family metaphor holds true even on a grueling location shoot in China. When in doubt, sit everybody down for a meal.

One thing that even playing sensei to the Wu-Tang Clan couldn’t have prepared him for, however, was dealing with the Chinese Government, which subjects the screenplays for films wishing to shoot in its country to rigorous – and, often seemingly arbitrary – reviews and restrictions.

“[The] Chinese Government, they don’t allow you to do movies there without approving the script. And they censored us, yeah – I had Shaolin in my script. Shaolin is a real thing, but they said ‘You can’t say Shaolin.’ So I said, okay it’s something else.”

Though to hear The RZA tell it, he had the last laugh.

“You can’t say ‘Peking Duck!’ I was all, ‘Peking Duck is real, man!’ But they won’t let it be Peking Duck. So I – y’all remember Bruce Lee Return of The Dragon? When the black guy walks in and goes ‘Can I get some Chinese spare-ribs?’ [laughs] So I put in my movie instead … I put ‘Cantonese braised-ribs.’ So, y’know, f*** it. I’ll make sh*t up. I changed Shaolin Temple to Wu-Chi Temple. ‘Cause I study martial arts, and Wu-Chi comes before Tai-Chi. So maybe somebody’ll watch this and say ‘Oooh, Wu-Chi?’ and become spiritually motivated.”

However The Man With The Iron Fists turns out to be, it seems that The RZA is on his way to being a behind the camera presence of some note. He’s an eclectic presence in person – excitable yet laid back and genial, with a knowledge of films and filmmaking (extending well beyond classic kung fu) that borders on the intimidating. When one of the journalists at the press event casually referenced the possible influence of 70’s Hong Kong star Jimmy Wang Yu, his face lit up and he spent the next several minutes recounting the obscure details of Wang Yu’s colorful biography.

Granted, encyclopedic film knowledge doesn’t necessarily translate to filmmaking skills. But The RZA has been doubted before – as a rapper, as a producer, as a businessman, as an actor – and has surpassed all expectations before. One thing is certain: His career will be one to continue to follow.

One final note: According to The RZA, he suggested to Russell Crowe that he consider playing the character of “Jack Knife” in the persona of deceased Wu-Tang Clan member Ol’ Dirty Bastard. He claims that Crowe agreed to study up on the late hip hop star, and called him later on in pre-production to say, “Bobby? Yeah… I think I’m gonna go Ol’ Dirty on this.” That certainly has to be worth a look.