Got a tech-oriented gamer in your life that you need to do some holiday shopping for? Have you felt overwhelmed by the selection of hardware, peripherals, and accessories out there? Which brands are the best? What features are even important?

We at The Escapist are here to help. We love our tech, and having personally tried countless peripherals, can put forward some recommendations on products that your friend or family member may enjoy.

In case you’re looking for something other than tech for your beloved geek, check out our collection of gift guides for the whole nerd spectrum. 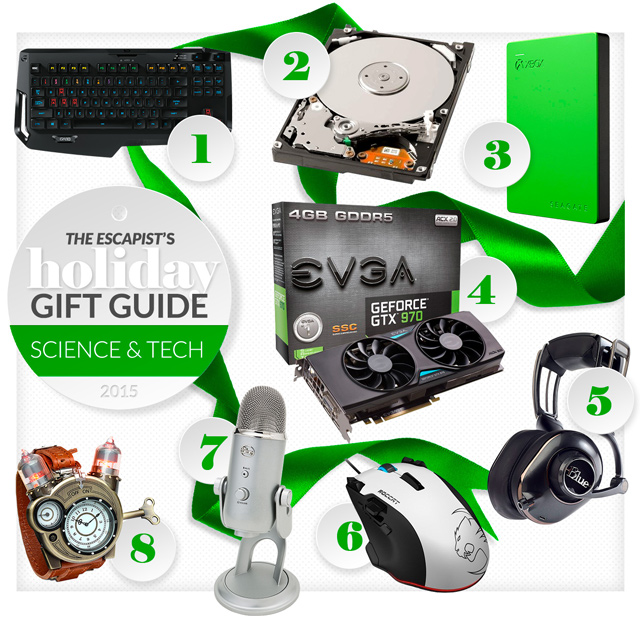 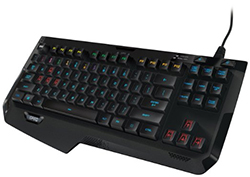 Ron says: Logitech’s G410 Atlas Spectrum keyboard is clearly targeted at a gaming market. It’s a much more compact peripheral than its big brother, the G910 Orion Spark. TO accomplish this smaller footprint, Logitech removed the 10-key numpad, the media controls, and the macro keys, leaving a fully-functional backlit keyboard that’s only 15.4 inches long. It is also light, weighing in at just 1.83 pounds,. making it ideal for someone who likes to game on the go.

It features Logitech’s exclusive Romer-G mechanical switches, which are similar in force and actuation to a Cherry MX Brown – fairly soft, and not as loud or clicky as most mechanical keys. It also employs standard key caps, rather than the scalloped keys from the G910.

Logitech’s packed in plenty of customization options. You can disable keys that you don’t want to risk accidentally hitting, and of course, the backlighting options are second to none. You can set up backlighting on a per-key basis, have effects on the keys, or even have them turn on and off in response to input. The software makes all of these options simple to set up. There’s also a smartphone stand to allow you to use Logitech’s Arx Control app to monitor your system’s hardware performance on your phone screen.

If you’re looking for a great keyboard for a PC gamer who needs more desk space, or someone who games on the go, the Logitech G410 would make a great addition to any gaming setup.

CJ says: Storage space is always an issue for a serious gamer, and the default 500 GB hard drive on a Playstation 4 can quickly fill up. Thankfully, the stock drive can be replaced with a bigger one, and you don’t need to be an expert to perform the operation – just savvy enough to follow a YouTube video guide. Someone who likes to buy multiple games and is stuck on the default drive would surely appreciate an upgrade to a 2 TB drive – that’s four times the stock storage space. Seagate delivers; a reputable name in hard drives, Seagate offers a practical product that is a no-brainer for a console gamer.

Josh says: If you’ve been on Xbox One for more than a couple of months, you’ve likely already had to start going through your hard drive and clearing out space for new games to install. It’s a frustrating reality of the current console generation. Where once you’d drop a disc in a tray and be playing your game immediately, now you’ve got too much data being tossed around to play off a disc, requiring everything to be installed on your console before you can play. When you’re regularly installing games weighing in at anywhere from 2GB to 20GB or more, your 500GB hard drive isn’t going to last long. I think we’d all rather be playing games than clearing space on a limited hard drive, though, and the console’s internal drive just doesn’t cut it in the long term.

Fortunately, you can plug a giant external drive into your Xbox One and expand your storage space significantly, and Seagate’s 2TB Game Drive for Xbox One is a great entry-level option. It’s on par with other similar products for cost, and is incredibly easy to get set up. You just plug it in and format it, and you’re ready to go. This particular drive is a bit of an odd duck because of its color scheme. Seagate went with the old familiar Xbox Green, despite the new console generation foregoing colors almost entirely. It’s not likely to even be visible, but if your living room aesthetic is important to you, it might be best to scroll down to “Compare to Similar Items” on Amazon, and find something that won’t stick out quite so much. 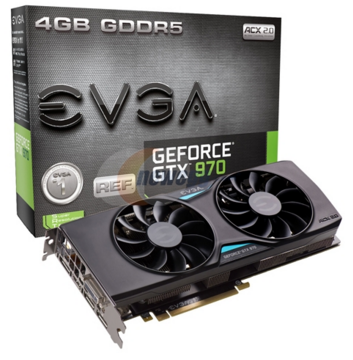 Ron says: If you’re looking to upgrade your PC gaming experience without going completely overboard on your budget, EVGA’s version of the Nvidia GeForce GTX 970 is a great place to start. It’s available in a multitude of configurations, so if you want one that’s factory overclocked, you can get it. It fits into most PC cases without a hitch, and it’s quiet. Even at full load, the sound of the card’s cooling fans is barely noticeable, and when you’re browsing the web or sitting at the desktop, they don’t turn at all.

If you’re running a card from previous generations, the GTX 970 is a worthwhile upgrade. It boasts a 1050 MHZ base clock that can be boosted to 1178 MHZ and 1664 CUDA Cores. It may not be as powerful as its big brother, the GTX 980, but this card can still hold its own on basically any modern game. EVGA even makes their tuning software available through Steam.

You’ll want to make sure you meet the requirement for at least a 500W power supply, but if you’re in search of your next video card, this GTX 970 is certainly worthy of the job. If you’re feeling really generous, you could grab a pair of them to make Christmas morning that much better. 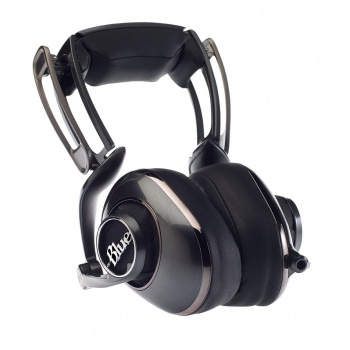 CJ says: Headphones range wildly in price, and most people can make due with fairly inexpensive headphones, regardless of their main purpose, be it gaming, listening to music, or watching videos. But if you’re to spoil a loved one with the gift of sound, then going for something on the higher-end of the quality spectrum is sure to impress. Blue’s Mo-Fi headphones are not cheap, but their quality is worth the price. For someone who wears headphones every day, a high-quality pair with crystal clear sound that will last them years thanks to robust build materials will make a world of difference over a flimsy plastic pair with poor bass and a tinny sound quality.

Thanks to a standard 3.5mm audio jack, Mo-Fis can be used with most devices – computers, laptops, smartphones, you name it – and a built-in amp that operates on USB-charged battery power optionally enables you to kick the sound into overdrive and blast the volume to truly obscene levels. 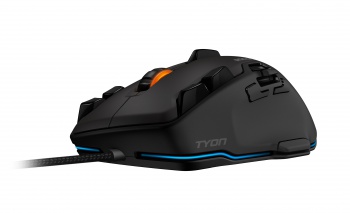 Ron says: The ROCCAT Tyon is a gaming mouse that tries to provide you with solid control options for almost every gaming situation, and it mostly succeeds. It features 14 programmable buttons, an 8200 dpi laser sensor, and ROCCAT’s Titan Wheel mousewheel, which feels really good in use. There are two buttons that may be of particular interest. First is the “X-Celerator” thumb paddle, which can be used for tilting, leaning, throttle control, and just about anything else you can think of. Second is the “Dorsal Fin-Switch,” a two-way button that you can easily control with the side of a finger.

Like other ROCCAT devices, the Tyon features ROCCAT’s “Easy Shift” technology, which allows you to set a button on the mouse as a shift key. When pressed, this key will change the function of every mouse button to a programmable secondary function. It’s an easy way to move a lot of your game functions to your mouse, if that’s your goal. The driver software is easy to use and understand, making it simple for anyone to set up macros, reprogram buttons, or just change the lighting colors. One thing to note: The Tyon is a bit larger than other mice, so if you’re a gamer with big hands, or just like the feel of a bigger mouse, this could be the one for you.

If you’re a gamer (or shopping for a gift for a gamer) who really wants to customize his gaming mouse, the ROCCAT Tyon is a worthy peripheral.

CJ says: Most gamers don’t pay much attention to their mics. A decent headset mic will be good enough for chatting with friends, but for anyone interested in streaming on Twitch.tv, creating YouTube videos, recording podcasts, or otherwise producing content that showcases their voice, a proper mic is an essential part of maintaining the kind of production value that audiences expect nowadays. The Blue Yeti is possibly the best mic for such purposes, striking the perfect balance between price and quality. While it certainly isn’t cheap, no proper recording mic is, but there’s a reason that the Yeti is so often recommended to those looking to start producing video content.

A simple plug-and-play USB mic with a variety of recording settings, the Yeti will have your voice sounding clear with little fuss or setup. Plus, accessories like a pop filter and shockmount can always be acquired in the future to get even more quality out of the mic. 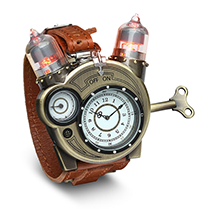 Liz says: “But it is not an experiment … I have built, demonstrated and used it. Only a little time will pass before I can give it to the world.” Nikola Tesla, one of the most intriguing mad scientists that our world has ever known, spoke these words at the age of 81 in reference to a particle beam weapon that he claimed to have built. Perhaps if Mr. Tesla had been donning an appropriate timepiece when determining the length of time he would need, we could have seen this fabled creation. The Tesla Watch from ThinkGeek is as dapper, distinguished, and slightly insane as the man who inspired it. A wonderful gift for anyone from procrastinator to tinkerer, steampunker to discoverer. There is a distinctive lack of a Tesla coil in the watch, so it may not be as shocking as one would like.

“Too Gory”: Viewers Walk Out of First Screening of The Revenant