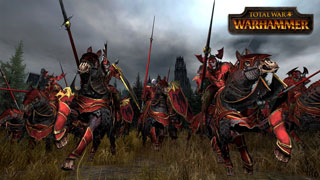 The first update for Total War: Warhammer is launching today, and it’s packed with content, changes, and fixes.

Since the release of Total War: Warhammer in May, we haven’t heard much from Creative Assembly. It’s now obvious why that is, as the first update for the game is absolutely loaded with content and updates.

The biggest addition is the Blood Knights unit. They serve as tier 5 shock cavalry for the Vampire Courts. The patch notes describe them thusly:

“Once the order of The Knights of The Blood Dragon, these noble warriors were dominated and given The Blood Kiss by the vampire Walach of the Harkon family. In undeath, their skill is no less potent: they are among the most powerful cavalry in The Old World.”

Also included is the option to opt into a beta for DirectX 12. Before you try it out, make sure you meet the system requirements listed here.

Five new multiplayer maps are included in this update, as well as a long list of multiplayer-specific fixes and updates. The five new maps are:

You can see all the changes on the Total War: Warhammer wiki, but be warned – the list is absolutely massive.

The update should be live for everyone now, and represents the first of a number of planned free DLC packs for the game.

Blizzard is “Exploring Some Options” to Improve Overwatch‘s Zenyatta