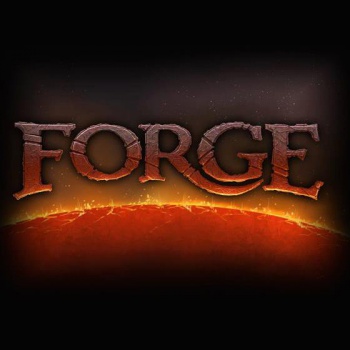 Perhaps it’s because it’s clearly a work in progress, but I get the impression that Forge doesn’t like me. It’s nothing personal, of course. Forge just doesn’t think I’ll fit in; I don’t have the right skills or the right background. I don’t have that essential competitive spirit. I’m not good enough for Forge.

Well, up yours, Forge. I don’t like you, either.

Despite being pitched as a PC-only “Class based, third person fantasy shooter,” in its (unsuccessful) Kickstarter, Forge actually hews much closer to the MMO PVP archetype popularized by World of Warcraft. Two teams of fantasy clichés armed with the traditional hotbar o’ skills, go head-to-head in a variety of ye olde fantasy arenas. Crystals are defended and/or attacked, spells are cast, buffs are applied and various acronyms are hurled to-and-fro, both in-game and on the forum that houses the game’s tightly knit community. What sets Forge apart from the MMOs it’s rather obviously cribbing from is its focus on “player skill,” as the marketing puts it. In this case, that translates into serviceable third-person shooter mechanics and a lack of meaningful character progression to prevent players from grinding their way to victory. Forge is essentially a stripped down version of the PVP shipping with most major MMOs, but the ability to aim freely, dodge projectiles and strafe behind cover does serve to freshen the mix. The fact it’s not saddled with a monthly subscription helps, too.

Once they’ve selected one of Forge’s handful of match types (at the time of writing only two were available, and only via a “random” option) players take control of five archetypical classes fighting for one of two entirely interchangeable factions. The factions have names, but there’s not a whisper of a story to be had in Forge, so we’ll refer to them as the red and blue teams. Oddly enough, the game would be much improved if the teams were actually red and blue. Instead, all the classes share the same color scheme, regardless of which team they’re on. The only way to tell them apart is by the red or green name/health bars suspended above their heads (two words, people: “Color Blindness.”) Your allies’ names are always visible, even through walls, which is handy because it’s very easy to get lost in Forge’s needlessly complex maps.

Each of the game’s five classes – they all have somewhat fancier names but you’ll recognize them as the Tank, Ranger, Rogue, Mage and Healer – has a selection of skills tied to a slowly regenerating resource. This resource also serves as fuel for sprinting, wall-jumping and blocking, the last of which is far more important than the very brief tutorial implies. To play effectively, players not only have to master their chosen class’ skillset, they also have to gain a working knowledge of the other classes in order to successfully counter them. Once they’ve learned that entire curriculum, players can move on to actually using those skills while strafing and wall-jumping, and then finally on to playing with others as an effective team. While more streamlined than the average MMO PVP, Forge still boasts a steep learning curve.

You can level up each class to 99, with individual levels giving you an insubstantial bonus. Some let you redistribute armour to protect against certain types of damage, while others allow you to make tweaks to the class’ speed or available energy. A few unlock extra skins or class-specific titles, but the most important perks, those that unlock “specializations” which allow you to adjust the class’ skillset, weren’t available in the current release. While Forge has been released, it certainly isn’t finished. The developers have promised extra features, maps and classes in future updates, but I can’t review a game based on hypothetical content.

In theory, Forge should appeal to both the MMO player looking for a quick fix of PVP that doesn’t require constant grind and the action gamer looking for a class-based shooter more cerebral than Team Fortress 2 or Monday Night Combat. In practice, the former will be put off by the game’s limited character customization and lack of context while the latter will either be completely left behind by the game’s short, useless tutorial or frustrated by the unintuitive MMO mechanics and shoddy presentation.

On a technical level, Forge’s graphics are competent, but the art direction is not only unappealing, it actually hampers the gameplay. The complete lack of faction colors is just the tip of that particular iceberg. The character models are drab, cluttered and difficult to make out at a distance. The maps are equally dull, lacking any kind of personality, logic or environmental story telling. One of them, a labyrinth bathed in glowing red light, is particularly grating. A few maps offer opportunity for some interesting vertical combat and wall-jumping, but for the most part the design is uninspired at best, downright confusing at worst.

The spell effects manage to be both obnoxious and uninformative at the same time. For example: The Pathfinder (ranger) can fire three or four different types of arrows. I’m sure one of them is supposed to be on fire, but they all look very similar. He can also set bombs which, when detonated, appear to release streams of spinach, leading me to believe he may in fact be some kind of highly aggressive nutritionist. The effects, particularly those for the bigger spells of the Pyromancer and Shaman, do a very poor job of conveying what’s actually happening in gameplay terms, impressive when you consider one of those classes is based around the concept of setting people on fire. When combined with the game’s drab color scheme and that weird, MMO-style, floaty animation, the on-screen action quickly becomes farcical, with characters skating around each other like they’re appearing in some kind of fantastic GWAR-on-ice concert. The spotty performance on my slightly-higher-than-mid-range PC didn’t help.

The lack of effective visual feedback will serve as the biggest irritant to action gamers. Forge. just doesn’t feel particularly satisfying or even exciting. While there’s fun to be had in outsmarting your opponents, the act of damaging them conveys … nothing, particularly when you’re using ranged attacks. Their health bar goes down and your resource bar goes up, but the action feels distant and abstract. You can play an entire round of Team Deathmatch feeling like you’ve contributed nothing to the team, only to find out you’re at the top of the leaderboard at the end of the match. The game is highly competitive and beautifully balanced, but actually playing it feels like a chore.

There’s a number of other, small, niggling problems with Forge, but I suspect a sizable amount of them are down to the fact the game is still in development. Forge has a ton of potential, and Dark Vale has promised has promised more content in the coming weeks, but as of right now, the game they’re selling simply isn’t good enough.

Bottom Line: Forge has some bright ideas, but they’re buried under the rushed execution and unimaginative presentation.

Recommendation: If you’re a hardcore MMO PVPer looking for pure competition, then Forge might be for you, given some time. Those who’re just starting out in the genre will want to start with something more polished and approachable.