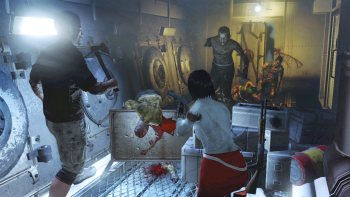 The developers of Dead Island: Riptide are none too happy that the game won’t be released in Germany.

Nobody seemed too worked up about it when Dead Island was banned in Germany last year. A rep from developer Techland said the decision wasn’t unexpected, and that both it and publisher Deep were “aware of such a possibility from the very beginning.” But now the expansion Dead Island: Riptide has also been given the thumbs-down, and Creative Producer Sebastian Reichert sounds a little more irritated about it this time around.

“We have no censored version of the game, so we cannot release it in Germany. It feels fucking awkward to have one of the most successful games in years and nobody in your country knows it,” he told PC Games N. Dead Island and Dead Island: Riptide are both published by Deep Silver, a division of Munich-based Koch Media.

The problem, it seems, are German laws that frown upon violence against “human-like” characters, which of course includes zombies. Making things worse, players can attack zombies when they’re “dead,” which apparently contravenes regulations against the mutilation of corpses.

Reichert also pointed out that while Dead Island is verboten, plenty of other violent games have been given the green light. “I’m really confused that you can buy Gears of War 3 in stores in Germany, but not Dead Island. Because where’s the difference?” he said. “I mean, [Gears of War enemies] are human-like, and the things you do to them… They really have nice finishers! That flamethrower finisher, he rams the flamethrower into the body, pulls the trigger and the flames come out of every body part. That’s in stores.”

Reichert added that despite the restriction, he hopes German gamers are scoring copies of Dead Island anyway.

Advice From A Fanboy: Justice League