Raze is a movie that’s nakedly, even proudly, made out of other movies. A lot of the time that doesn’t work, mostly because lesser filmmakers assume that ripping off multiple things will somehow “dilute” the bitter taste of laziness left by only ripping off one thing. Sadly, that’s not how it works. But sometimes, somebody actually finds the recipe for gold in the alchemy of pastiche. This is one of those times.

Broken down by its component parts, Raze is an action/horror hybrid born of mashing together Bloodsport, Hostel, Cabin in The Woods and Chained Heat; along with aesthetic and thematic influences from Quentin Tarantino’s action-girl fetishism to David Cronenberg’s artcore body-horror. And somewhere in the midst of all that, it finds a potent voice of its own, emerging as a brutal, spartan thriller that turns a textbook exploitation setup into a smart, (sometimes literal) chamber-piece.

At times it almost feels like the filmmakers have been dared into some kind of personal challenge: Can you make a movie that sails easily through the suddenly-ubiquitous “Bechdel Test” checklist while also being comprised almost-exclusively of scene after scene of young women being violently beaten to death and not come off like some kind of diseased peep-show smugly wrapping itself in the cloak of ironic satire?

Yes, as it turns out, you can.

The premise is simple – the stuff low-budget, high-concept dreams are made of: a number of young women have been abducted and held captive by a mysterious society of wealthy sadists who, for their own amusement, force said women to fight each other to the death in hand-to-hand one-on-one matches until only one remains to be set free. As an extra incentive to action, a loss or a concession means that not only you die, but so do your loved ones on the outside.

Our main star is Zoe Bell, the martial-artist and stuntwoman last (and probably first) seen by most audiences playing essentially herself in Quentin Tarantino’s Grindhouse contribution Death Proof. Here she’s a battle-tested former P.O.W named Sabrina, forced into the fight in order to save the life of a daughter she gave up for adoption long ago. 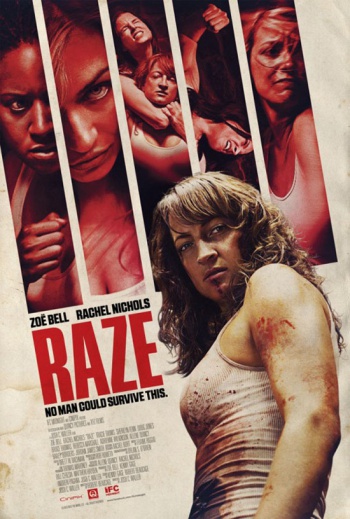 We’re told the full roster of combatants is fairly large, but the film narrows its focus to the six in Sabrina’s cellblock; established as functional characters efficiently and also neatly sectioned-off into the necessary tournament-fighting stock types: The Hero, The Badass, The Psycho, The Innocent, The Brain, The Sadist, etc. You wouldn’t think that breathing new life into such a tired formula would be as seemingly simple as making them all women and imposing a prison-style regimented structure on the proceedings… but it works.

The overall style is a strange mix where the setting is budget-consciously unreal and the characters are broadly-drawn by the action strains for unnerving realism: a few of the women have varying degrees of actual fighting skill, others don’t, but nobody gets to be superhuman. The fights have a satisfying variety based on personality, ability and motivation but when it comes to it everyone has pretty-much the same “finishing move”: Find your opponent’s head and just keep punching until it isn’t shaped like a head anymore. The violence is bloody, savage and hard to watch but not to a cartoonish degree.

Unfortunately, as the third act comes around a lack of focus outside the confines of the women and their bouts starts to strain the film’s larger ambitions. Doug Jones (best known as a creature-suit actor from various Guillermo del Toro projects) and Sherilyn Fenn are magnificently creepy as the villainous proprietors of the games, but we end up spending just too much time enough with them so as to expect a bigger “purpose” behind their actions than the film is willing to hint at beyond “a lot of rich douchebags would probably pay to watch this” and vauge allusions toward fetishizing female suffering under the pretext of some weird cult-idealization of Greek Maenad mythos. As a result, and otherwise darkly-cathartic finale undermines itself trying to stack a few too many dramatic turnarounds atop one-another.

So, Raze isn’t quite the slam-dunk New Cult-Action Classic it comes within striking distance of being, but it’s a satisfyingly nasty diversion whose unique setting and boundary-breaking lineup of players give it an edge in the crowded B-list action scene, which has exploded in popularity (and quality) in recent years thanks to entries like Ninja: Shadow of a Tear and Man of Tai Chi.

Even setting aside the women-only hook, its one of the most brutal fight-films you’re likely to have seen in a while (there’s really only two battle scenes where you’re supposed to cheer instead of wince); and its certainly a welcome alternative at a moment where your other options are limited to shockingly-incompetent dreck like The Legend of Hercules or Lone Survivor‘s exhausting, pandering war-porn. Imperfect, to be certain, but memorable; and if nothing else Bell makes for a compelling, unconventional female lead.