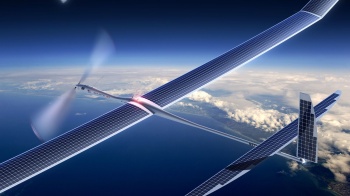 Google has been secretly testing “Project SkyBender,” which aims to beam 5G internet to Earth from high-flying solar drones.

Up-start technological firm “Google,” pioneer of search ingenuity, certainly has some audacious plans in store. The company seeks to deliver a sort of “wide-webbed world” to the masses via a fleet of flying machines. These airborne mechanical wonders are powered, if the news is to be believed, by sunshine itself. I am totally out of my depth, here – I need to ask Jeeves about all this.

Yes, it appears that Google’s “Project SkyBender” has finally been unveiled to the public. The big G has been testing their recently acquired Titan drones at New Mexico Spaceport Authority, with the intention that these drones will someday soon be beaming 5G internet down to Earth.

Previously, “Project SkyBender” was assumed to be CEO code for getting drunk on an airplane. Not good code, obviously.

At the airfield just outside of Truth or Consequences, New Mexico (yes, the same one from that Doctor Who two-parter), SkyBender has been experimenting with using drones and millimetre-wave radio transmissions, technology which may underpin 5G. High-frequency millimetre waves can transmit gigabits of data every second, up to 40 times faster than the 4G internet access some of us have, and more than twice as fast as dial-up.

Another of Google’s internet-delivery experiments, “Project Loon,” has been in testing recently, as well. “Loon” sees helium-filled balloons filling the sky, acting like low-low-orbit satellites, bouncing information between themselves. Combining the two technologies could contribute to building a literal world-wide web of criss-crossing, airborne transmitters – a “series of tubes”, if you will.

In other Google news, it’s been revealed that the man who managed to sneakily grab the “Google.com” domain name in the moments before its renewal was paid 6,006.13 to hand over ownership. That’s “Google,” if you squint. When Sanmay Ved, an ex-employee, offered to donate the payment to charity, Google doubled the payment. 12012.26 doesn’t look like anything, though! Thanks, charity.

Well, Escapists? Are any of you brave enough to make the “Skynet” joke I clearly missed my chance at?

Walmart Is Getting Into the Graphic Novel Trade

CliffyB Says FPS Campaigns Take up 75% of The Budget