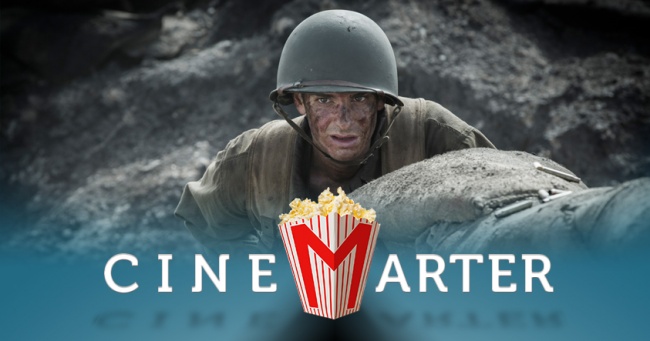 It’s been a while since anyone in the movie industry was willing to finance a movie directed by Mel Gibson. Given the actor/director’s many controversies, this makes sense. You have to let the heat settle down for a while before you give him millions of dollars, lest people protest and convince everyone to skip out on the movie, regardless of quality. And, in the case of the film he has made, Hacksaw Ridge, the quality is very high. Say what you want about Gibson as a person, but it’s almost undeniable how talented he is as a filmmaker.

Hacksaw Ridge tells the true story of Desmond T. Doss, here portrayed by Andrew Garfield. Set during World War II, the film showcases Doss enlisting in the United States Army, going through all the training, and eventually all of his exploits during the Battle of Okinawa – all while refusing to take part in the combat aspect of war. He, a deeply religious man, tells everyone that he won’t even pick up a gun, let alone fire it. His plan is to be a medic, you see, and you don’t need a gun to treat the injuries of those who will. 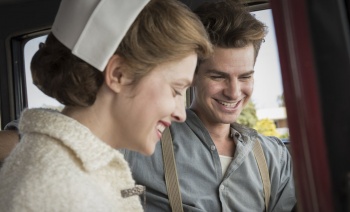 The first half to maybe two-thirds of Hacksaw Ridge follow Doss in both his hometown – where he meets a nurse named Dorothy (Teresa Palmer) and marries her – and in his army training. The training takes the most prominent focus, as we watch him anger his fellow soldiers with his pacifism. That even leads to him being court-martialed, ostensibly for disobeying orders, but practically because, as the Sergeants and Captains rightfully – I think – thought to believe, he might not do a whole lot of good in a war zone without a weapon and did not want him there.

Most of this is repetitive and kind of dull, with Doss repeatedly saying he’ll stay true to his religious and pacifistic beliefs, and everyone else telling him he can’t. You never for a second think he’ll relent. This aspect to the film lacks tension and exists solely to espouse Doss’ views of the world and the war. We get them after 30 minutes, which means that anything after that is unnecessary – especially as we only find out the real reason for his desire never to hold a gun during the actual war part of the film. Before that, it’s just an unfinished and unexplained flashback.

Hacksaw Ridge is a very well-made movie that indulges a lot in its heavy-handed messaging, particularly early on, before getting to its inspirational portions at the end.

The war scenes are what you’re going to want to see and for which Hacksaw Ridge will be remembered. They are as violent and graphic as mainstream war scenes will get – to the point that the squeamish members of the audience will look away. We don’t get into B-movie or grindhouse territory, but they’re plenty violent. They also feature an unbelievably heroic sequence of events, the things that Doss did on the battlefield that made his story worth telling. All without a weapon. We finally see that this is the reason why we have a movie about this guy and this is why it is one worth watching.

Despite being based on a true story, I won’t spoil exactly what Doss did that’s so impressive – if you don’t know, the reveal in the movie (especially the number) is great – but suffice to say that watching him do it, especially with all this horrific war stuff going on around him, is inspirational. And the war scenes are magnificent; Mel Gibson can direct these sorts of things like few else. You wish that the split was 2/3 war movie instead of 1/3 war movie after seeing it, because while the war parts are also repetitive, there’s enough done to change things up to keep them fresh – in addition to being unbelievably impressive.

One of the oddest decisions, I think, in the production of Hacksaw Ridge was to cast almost no Americans – or, at least, American-accented actors – to play main characters. This isn’t much of a problem for most of the time, as even Garfield’s over-the-top accent doesn’t hurt the movie, but there are occasions when you notice accent slippage. And then there’s Hugo Weaving, whom I typically really enjoy watching, but here doesn’t seem to have any clue as to what accent he’s supposed to be doing. There’s obviously more to acting than that, but when your born-and-bred Virginian intermittently sounds like he’s from Sydney, you’ve got a distracting problem, movie. Props to Vince Vaughn, Sam Worthington, and Luke Bracey, though, who all turn in really, really good performances.

Hacksaw Ridge is a very well-made movie that indulges a lot in its heavy-handed messaging, particularly early on, before getting to its thrilling and inspirational portions at the end. It’s an incredibly filmed war movie – once we finally get there – and is as violent and graphic as a mainstream one probably could be. It gets repetitive and a little bit grating, but not to the point of wanting to stop watching. It’s always at least in some way engaging, and most of the actors – even some who historically aren’t the greatest – turn in great performances. Hacksaw Ridge serves as a reminder that Mel Gibson, however you may think of him as a person, is an undeniably talented filmmaker.

Bottom Line: It takes too long to get to the parts we want to see, and is far too heavy-handed and preachy in delivering its message, but when Hacksaw Ridge gets into gear, it’s one heck of an experience.

Recommendation: Unless you’re squeamish, you should probably see Hacksaw Ridge.