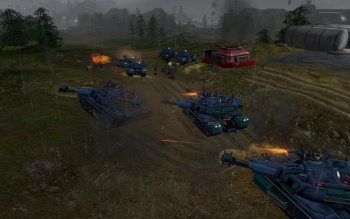 Trion’s upcoming MMORPG Rift: Planes of Telara may be a standard MMOG through and through (with a few new twists), but the publisher’s other game, End of Nations is something we really haven’t seen before. When I first saw the game in action, I remarked that it was part MMOG, part RTS, and part Pokémon. Last week I had the chance to sit down and play it for a few hours, and as it turns out, my initial observation was right on the money.

Set in a dark future where economic collapse triggers the fall of nations as we know it (see the title) and the rise of a one-world tyrannical state called the Order of Nations, End of Nations is being developed by former Westwood employees at Petroglyph and headed up by the man behind Supreme Commander, so it’s hard to say that the developers don’t have experience with making strategy games.

But that’s not to ignore the MMO part of it either. This isn’t just a “(insert genre here) with MMO elements” like a persistent world map – though it does have one of those, too. I deployed my forces in the troubled Russian area of Magadan, a massive 20-square-mile adventuring area filled with Order bases in dire need of a few well-placed artillery shells.

For all intents and purposes, Magadan and other areas like it are the equivalent of questing zones in “proper” MMORPGs. It’s drop-in-drop-out at any time you want, there’s a relative safe haven in a town where you go to get quests and rest/shop up, and there are plenty of Order patrols to kill on your way to get things done. The missions themselves are more RTS standard – go there, kill this, blow that base up – and if there are any of the infamous “Kill ten wolves tanks” quests to be found, I didn’t encounter any of them in my play time.

There’s no mistake, you are playing an MMOG, you just happen to be playing one that plays like an RTS – rather than controlling a single character, you’re controlling a group of vehicles. There are still character classes, too. Tank Commanders are your, uh, tanks – designed to slug it out toe-to-toe with an enemy, to take as much punishment as it deals out. Artillery Commanders are the wizards, dealing potentially-devastating damage from range but being slow and vulnerable when deployed. Strike Commanders are the game’s rogues, fielding squadrons of quick and nimble vehicles with powerful weaponry that blow up in a stiff breeze.

As someone who is relatively experienced in both MMOGs and RTS games, End of Nations starts off feeling very (literally) divided. Half the screen is devoted to the RTS elements (your units and their commands), while the other half is what you’d consider the more MMOG side of things – items and your “commander powers” like airstrikes and temporary buffs. It’s a bit confusing to get used to at first, because there’s a lot of information on screen at any one moment. Of course, it didn’t help that this was the first time I’d seen any of the hotbar icons and had to keep mousing over them to read the tooltip of “What does this do, again?” 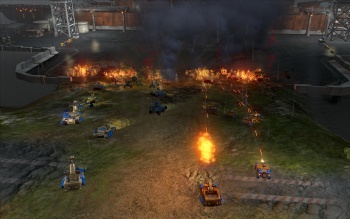 After the largely-soloable Magadan zone, we were airlifted to a hotspot in Oman which was a higher-level zone designed to be tackled by a group. It was here that the rough pre-beta state of the game started to take its toll. The Oman area is meant for a team of four players to take on all together, but disconnects and poor communication meant that we trickled in one by one and got very spread out along the way. This would be a problem.

We were supposed to rendezvous with a contact leading the local resistance and head in to disrupt Order of Nations supplies and communication, but that didn’t happen. Imagine throwing five people who have never played WoW before into a high-level dungeon with the barest familiarity with what they’re supposed to be doing, and you’ll get the idea of how quickly things can go downhill. We had three artillery commanders spread thinly and far apart, and our tank commander was over there somewhere doing something else entirely as Order forces delved in at unprotected flanks. It didn’t go well.

Without coherent communication, things went from bad to worse. The Order is in full presence here in Oman, and trying to take on patrols tuned for a four-player group by yourself when your buddies are off doing something else entirely is a recipe for disaster. If all of your forces are destroyed, it’s easy to just respawn in full at your base, but if you only have one or two badly-damaged units left it can take quite a long time to replenish and repair your army – it may in fact be better to just suicide in and start anew.

RTS players will likely be pleased to learn that you can’t just move in and blow the hell out of everything for an easy victory. We failed because we didn’t work together, we didn’t coordinate, and we certainly weren’t familiar with our forces. But it’s not incorrect to say that End of Nations seems really over-tuned at this point. There were too many enemies that spawned too quickly and took too long to defeat. It takes too long to get out of combat and retreat to a safe haven to nurse your wounds, and it’s hard to regroup with your teammates when you’re split up.

At one point, we caught a glimpse of a massive Panzerhulk tank-battleship slowly rolling through the desert, but couldn’t go take it on like we wanted to because it was just too hard to regroup after our initial scattering. That’s not a fun situation to find yourself in.

The good news is that from talking with the developers, they’re aware of these issues (“Yeah, we should probably turn down that spawn rate, huh?”) and the problems are all relatively simple ones to correct. It’s very easy to just add icons and colors on the map to help you find your teammates; it’s very easy to tweak numbers to make the Order forces less numerous and less individually taxing to defeat. If these problems make it to later builds, I will be very, very surprised.

All in all, End of Nations is in much rougher shape than its Rift counterpart, but that’s also because it’s much earlier in development. There are some really cool ideas here and I think that this is potentially a game that RTS fans and MMOG fans alike can really end up sinking their teeth into.

While I can’t really say any more at this point, it bears mentioning that the PvP is also a blast and a half. The fundamentals here are shaping up strong, it just takes a bit of time and tweaking and polish to make sure it all works how it’s supposed to.