Let’s get all the Transformers puns out of the way right off of the bat, shall we? Transformers: War for Cybertron is more than meets the eye. It’s clear that developer High Moon Studios really has the Touch: It’s an Optimal use of the Transformers license, and a Prime example of what the franchise can look like when handled with care.

Hurricane of puns aside, I sat down with Transformers: War for Cybertron for four or so hours Wednesday night, and came away very impressed.

The game takes place long before the Transformers’ arrival on Earth, during Megatron’s initial uprising and the battle between the Autobots and the Decepticons for control of their home world Cybertron. Right away, the setting inherently does away with what many people didn’t like about the recent movies: There aren’t any humans to get in the way of awesome robot action. This game is all giant robots, all the time.

We were initially thrown right into the game’s multiplayer, which provided a good introduction to the fundamentals of how War for Cybertron works. In the multiplayer, you’re playing as a generic Autobot or Decepticon soldier, which thankfully curtails any “No, I want to be Megatron!” arguing right off the bat. Instead, you can customize your vehicle chassis, color scheme, and weapons loadout as one of the game’s four classes: Leader, Soldier, Scout, and Scientist.

Leaders transform into trucks and are strong all-around fighters, with the ability to erect shields and to unleash a battle cry that boosts the combat capability of nearby allies. Soldiers are tanks – literally – and have the highest health of them all, with some devastating damage-dealing potential. Scouts become little zippy cars, can turn invisible (gaining extra melee damage when stealthed), sprint, and throw disabling EMP grenades. Scientists are the “support” class, able to turn into jet fighters, set down defense turrets, and heal allies with a repair beam.

It speaks to High Moon’s talent that each of the classes feels distinct and yet powerful; every time I tried a new class I found myself deciding that this was my new favorite class because it was so awesome, only to change my mind once I went to the next one (my best performance was as the Soldier, but being able to fly around as the Scientist is still awesome). It was also very impressive how natural and intuitive the transformation mechanic was – a click of the left thumbstick, and your ‘bot transforms in and out of vehicle mode instantly, and both vehicle and robot forms are fun to use and useful in combat.

We saw all of the standard multiplayer game types you’d expect: team deathmatch, territory control, CTF and a bomb-drop mode, and while none of these were particularly new or head-turning, they were all a great deal of fun to toy around with. 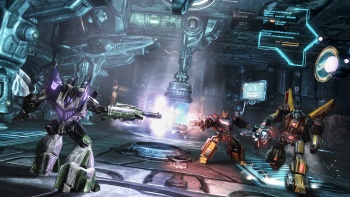 But if multiplayer isn’t your thing, or if you think the idea of playing a nameless Autobot or Decepticon grunt is lame – where’s my Optimus Prime, dammit?! – the singleplayer modes are where you’ll want to go. War for Cybertron contains two full story campaigns, one for the Autobots and one for the Decepticons, and yes, you’ll be playing as the Transformers.

I was able to play through a level of the Decepticon campaign with two others – both campaigns fully support three-person co-op from beginning to end – during which Megatron and his followers were attempting to track down the mysterious Dark Energon as well as recruit Starscream to their cause.

The gameplay itself was just as solid as in the multiplayer, and while the gunmetal gray environments of the Cybertronian installation did begin to feel a bit same-y, they were nicely broken up by moments with more color, like the moment when the three Decepticons took a detour through an old furnace (filled with spinning blades and heat jets, naturally – Cybertron must not have OSHA regulations). It’s slightly annoying to have to restart from the most recent checkpoint if only one of your three members goes down and isn’t revived, but checkpoints are common so it’s rarely a huge setback.

Transformers fans should get a kick out of everything here. Where the developers couldn’t get the original voice actors, the replacements do passable jobs, and the entire thing does feel like it was made by people who genuinely love and respect the source material of the Transformers lore and backstory.

We also were able to see the brand-new, just-unveiled Escalation mode, which is essentially War for Cybertron‘s take on the by-now-standard “Horde mode.” You and three other Autobots or Decepticons must hold the line against wave after wave of incoming enemies, and earn points which can be spent on new weapons, health and ammo refills, and opening doors to other, more easily defensible parts of the map.

While Escalation is essentially just “Decepticon Zombies,” it actually works quite well – the enemies are all nicely varied, from little zippy spider ‘bots and stealthy assassins to melee-focused berserkers and damnable enemies carrying lethal rocket launchers. You, too, have many more tools at your disposal than just guns: Imagine if you could turn into a jet in Call of Duty and fly around blasting the zombies. Sounds fun, doesn’t it? A particularly nice touch is the ability to essentially pool your points together, letting you open doors more quickly and purchase health and ammo for your teammates who might need it more than you. 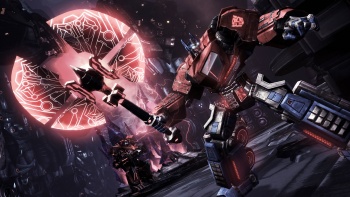 In Escalation as in the campaign, you’ll be playing as the main Transformers, each of whom has their own abilities similar to those of the multiplayer classes. If you’re playing as Starscream and your Megatron goes down, there’s nothing that says you have to revive him, you know.

The game isn’t perfect: Sometimes I found myself confused in the heat of combat and attacking my allies instead of my enemies (thankfully, there was no friendly fire enabled), and it was difficult to find ammunition in multiplayer when I was low – though that may well just be my inexperience with the game and its maps. Cybertron may be a machine planet, but if the campaign just takes place in similar-looking gray corridors, it will get old very fast.

But the license feels like it’s in good hands with High Moon. The gameplay is tight, slick and intuitive, the classes are fun and varied, and long-time Transformers fans will probably appreciate the love that the developers have for the franchise: Where they couldn’t take things directly from the old cartoons (like, say, the iconic transformation noise) they’ve come up with excellent replacements.

In many ways, this feels like it could be to Transformers what Arkham Asylum was to Batman (even if it doesn’t feel quite as brilliant as Arkham): Calling it “a good Transformers game” feels like doing it a disservice, because right now, Transformers: War for Cybertron is shaping up to be a very good game – period.

Incidentally, High Moon team refused to confirm whether or not Stan Bush’s 80s anthem “The Touch” would be in the game, but I was told that there would be a Stan Bush song. So, I guess it’s either that or “Dare.”

Transformers: War for Cybertron is out on PC, Xbox 360 and PS3 (with spinoffs for DS and Wii) on June 22nd.

Sega Considers Online Pass of its Own