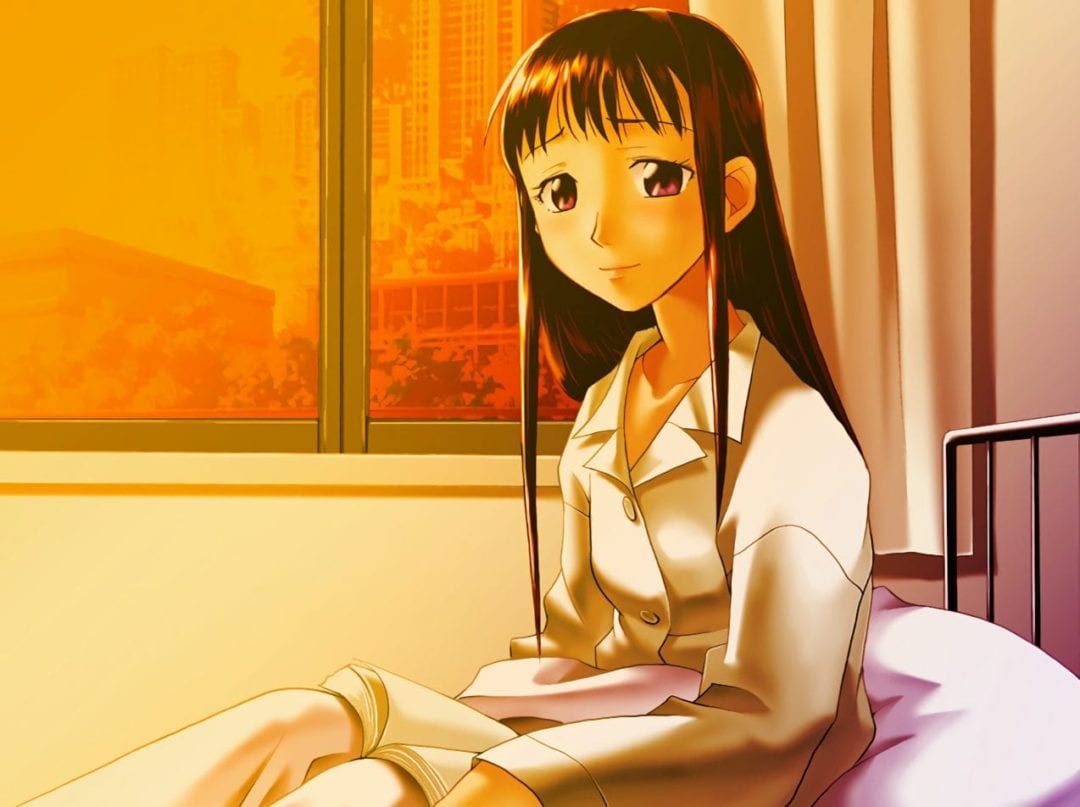 I’ve just finished a game whose story left me changed. At times viscerally uncomfortable, at others touching, it was a story of filial love, coming-of-age, the fragility of childhood and the bleakness of mortality.

The bad rap’s not entirely unwarranted. H-games rely on genre-specific conventions – plastic rationalizations to permit fantasy scenarios that frequently approach the ridiculous, even the morally reprehensible. Starkly-drawn archetypes are the norm — the nymphomaniac stepmother, the shrinking violet, the school’s Miss Popular or the uptight school teacher. Your protagonist — usually a reserved, serious type — has the opportunity to biblically know them each in succession, and after the veritable explosion of wild oats, will usually choose one as a mate for life in one of the multiple endings.

But ironically, perhaps a bit like reading Playboy for the articles, many fans claim to play these games for the stories. The majority of the time these games are click-through dialogue over still images and descriptive prose, with the occasional break to pick a plot branch (think Choose Your Own Adventure) that helps to decide which of your often rudely-used playthings has now become the love of your life.

It seems rather paradoxical: In a game full of superficiality, stereotype and cheap thrill, why do players need such elaborate storylines?

Could it be because sometimes, they’re really good?

Kana: Little Sister is well-ensconced as a fan favorite among H-gamers. It was originally released in Japan in 1999, and G-Collections published an English-language version in 2002. It’s the story of Takamichi Todo’s relationship with his ill younger sister, Kana, beginning in childhood and spanning their lives. Kana is a frail, sweet child with an uncertain future who may not live to see adulthood due to a kidney disease, and as her big brother, the protagonist has the opportunity to become the de facto custodian of her remaining days.

But it’s not as simple as that. Early in the game, the young Takamichi must wrangle with his resentment toward Kana, both because of her continual fragility and because of the attention her parents heap upon her. Throughout his maturation, he must cope with his own revulsion toward Kana’s morbidity and his fear of loss to become the source of strength little Kana so desperately needs.

The extent of the role Takamichi will play in his sister’s life is subject to the player’s choices, though he’s inextricably involved, and the confusing sexual urges he begins to feel toward vulnerable, dependent Kana are unavoidable. The urgent investment he develops in Kana’s survival and her future normalcy and happiness may evolve into a physical relationship, even romantic love.

Many H-games contain characters that are underage, in fact. The laughable pains the writers take to suggest the characters are 18 are absurd, given your copious opportunity to view them in explicit anatomical detail. Incest is par for the course; the frustrated mother character and the bratty little sister are familiar H-game archetypes. Fetish behavior is to be expected, too; play through a few H-games, and you’re likely to be educated in some practices so niche you didn’t know they existed.

H-games give the player an imaginary sex life without consequences or judgment. It’s easy to extrapolate that the anything-goes hyperbole is geared to satisfy players with predilections they can’t act upon in real life. And it’s easy to condemn the genre as a cheap thrill at best, with its often ludicrous stereotypes and absurd scenarios. At worst, with frequent themes of abuse and women who fall in love with their rapists, you could define them as misogynistic, even deranged.

But analyzing H-games by their simplest elements still doesn’t explain why the storylines are rife with complexity and melodrama. A closer look at H-games reveals that, under the layer of obvious, high-school-girls-as-paper-dolls entertainment, human sexuality is not so easily extricated from human psychology.

The protagonist is usually a bland, reserved type; serious and diligent, he rarely breaks the mold. Often, he’s bullied by women rather than chased by them, an essential building block in a misogynist’s psyche. As alarming as it can be, sudden bursts of sexual aggression make sense in context; they’re the extreme fulfillment of a wish for masculine self-empowerment.

That’s not to say that all H-games rely strictly on aggression for empowerment, though. Just as often, they approach the romantic. In many cases, the sex act liberates a “trapped” girl – say, the non-verbal loner having problems at home, the painfully shy librarian or the overachiever exhausted of keeping up appearances. In those cases, the player gets to embody an odd sort of savior. He’s a hero, because he made a troubled girl smile for the first time.

The archetypal females become avatars of the turbulent teen years, a young man’s oversimplification of a perplexing creature. In an H-game, the player can approach the sirens of his high school days in ways social rules once prohibited. He has a second chance to understand the student council president who once rebuffed him painfully, and by cultivating a sexual relationship through the game, he comes to understand her as human.

High melodrama and grievous tragedy are common themes; Kana: Little Sister‘s not unique in this. Death as an omnipresent companion to the majority of H-game stories is often used as a catalyst for high-intensity emotional scenes, a cheap conveyance to instant cathartic sex.

But Kana is undoubtedly exceptional. The tragic elements are deeply affecting, highlighting the transient nature of youth; the melancholy, nostalgic environments subtly triggering neglected sadness, the memory of what might have been left behind. And then, there’s also simple empathy for well-drawn individuals and their unfortunately inexorable fates. Kana: Little Sister has six possible endings, and only one finds Kana surviving to adulthood. Ordinary choices, whether to take her to an arcade or a tea shop, for example, are invested with new levels of meaning when you realize this might be Kana’s last chance.

When she becomes frightened, or tired, when she casts her eyes down, and she asks Takamichi questions he can’t answer about her future – about their future together – I get choked up.

In this way, Kana: Little Sister is much less a sex game than it is a self-generated essay on deep-rooted human essentials: the value of life, the nature of family, the manifold definitions of love. Nonetheless, the eventual revelation that Kana is not actually a blood relation feels incongruous, heavy-handed, as if the writers were suddenly backing away from their grave creation.

Sex does occur in the game, but unlike common H-games, which relegate the brother-sister dynamic to an afterthought (as if your sister could ever be just any hot girl), Kana’s sibling status is handled delicately, with a notable absence of vulgarity. The more overt, envelope-pushing sex scenes are actually the territory of Yumi, a much more typical “girlfriend” character. It’s this dignified treatment of all its characters that truly sets Kana: Little Sister apart. In doing so, it retains the gut-punching gravity of sex’s oppositional marriage to death, ensuring it can never be anything other than a personal story.

Chasm / This is the Police 2

The State of Dungeons & Dragons: Future