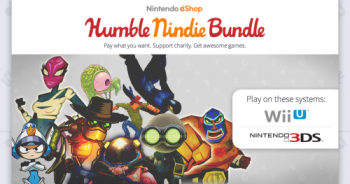 Humble Bundle has just unveiled the “Humble Nindie Bundle”, a collection of indie video games for Nintendo’s Wii U and 3DS platforms.

Humble Bundle is largely considered a PC gaming service, even with the occasional mobile bundle or eBook deal on its storefronts. You certainly wouldn’t expect it to release games for a traditionally restrictive publisher like Nintendo – yet this afternoon that’s exactly what Humble Bundle did. If you head to the website right now, you’ll see the “Humble Nindie Bundle”, a pay-what-you-want eShop collection that includes Moon Chronicles, Mighty Switch Force, Guacamelee and more for Wii U and Nintendo 3DS devices.

As with previous bundles, the Nintendo eShop collection includes nine games with a tiered pricing scheme. If you pay the $1 minimum, that unlocks the Metroidvania platformer Guacamelee: Super Turbo Championship Edition, the arcade-inspired Woah Dave, and the 3D space altering Mighty Switch Force. Pay over the average price, and Humble Bundle will throw in the adventure-puzzler The Fall, the skateboard-grinding OlliOllo, and the 3DS FPS Moon Chronicles. Finally, pay over $10, and you’ll unlock Stealth Inc 2 and Steamworld Dig to round off your digital eShop collection.

Sure, these aren’t the games Nintendo is best known for – there’s nary a Mario or Zelda in sight – but these are still critically-acclaimed indie hits which will keep you busy for hours. What’s more, a portion of proceeds go to Code.org, a non-profit charity seeking to increase worldwide education of computer science. Combined, that makes Humble’s Nintendo eShop Bundle worth inspecting – and we don’t even know what bonus games will be unlocked next week.

And perhaps if this bundle does well, Nintendo will consider a collection for its in-house franchises. Who knows?