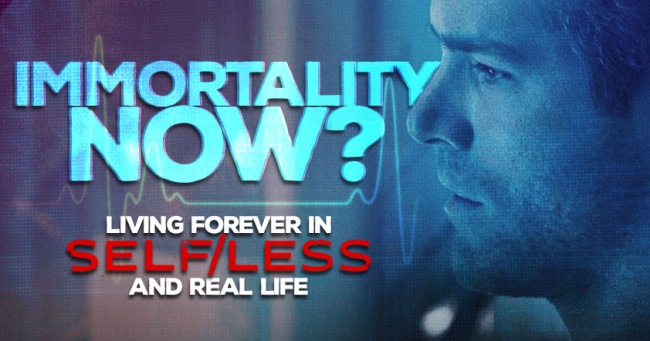 Wouldn’t it be great to live forever?

That’s a question asked by countless science fiction films – this week’s Self/Less being no exception – but the answer is usually that immorality isn’t as fun as you’d think. While sticking around for as long we’d like sounds great in theory, actually doing so has a lot of consequences not everyone would be ready for, and that’s without getting into whether it’s even possible in the first place.

That’s why The Escapist recently spoke with Dr. Wolfgang Fink, an associate professor from the University of Arizona in the Departments of Electrical and Computer Engineering and Biomedical Engineering. It turns out that a great many scientific minds are trying to fight that pesky death problem with some interesting solutions – and in some ways we’re actually quite successful on that score.

“In getting towards immortality or longer life, there are of course medications which prolong life,” Dr. Fink said. “If you look at life expectancy from 200 years ago people live on average much longer. That’s something which is happening right now.” 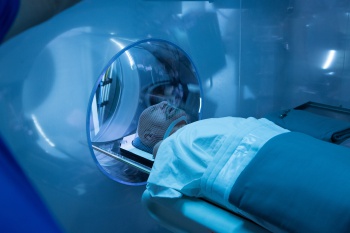 But what options do we have for extending human life even further? Let’s start with the version of immortality put forward in Self/Less. In the film, Ben Kingsley plays a man near the end of his life. He’s approached by a wealthy cabal that claims to have a solution: Downloading his brain into a mindless clone that’s been grown in a genetics laboratory. Within a very short span of time he completes the procedure and starts his new life as a younger man – only to realize that his body doesn’t belong to a clone. It’s a body wiped of memories and given to Kingsley no questions asked, which he only learns when the man’s thoughts start coming back.

“Clearly the film is still located in the realm of science-fiction to some extent,” Dr. Fink explained, forever dashing our hopes of becoming Ryan Reynolds. “Every person has a different brain and is differently wired. So it’s not just a matter of getting all the memories transferred but you also have to get enough of the “wiring” transferred of how your brain is wired in order to ensure thought-generating processes.”

It turns out that even among members of the same species, we all have very personalized brains that change over the course of our lives. Our personalities and thoughts are tied to neural connections in our brains that aren’t guaranteed to exist in the brains of another person. Think of our brains like computer hardware, and our minds as software – simply copying one to the other doesn’t mean anything if the other brain doesn’t recognize it.

“If your hard drive was formatted for a Windows system, and mine was formatted for OSX, then you can’t just dump your hard drive content onto the OSX drive or vice versa,” Dr. Fink said. “It will not work.” That means even if we had Self/Less‘ mind-wiping technology, the empty brain still uses the neural wiring of the old personality – which might explain why the old personality started reasserting itself.

One possible workaround for this is using clones to preserve our memories in fresh young bodies. On the surface, this seems like a solid idea – it removes the ethical concerns of erasing another person’s personality, and could let you extend your lifespan indefinitely.

Of course those pesky ethics come back when you realize that in reality, clones don’t grow conveniently and quickly with no minds of their own. To create an adult brain that’s developed enough to accommodate your neural patterns, it has to have a long adult lifespan just like you. “Cloning doesn’t mean you get your body like in Self/Less over the weekend,” Dr. Fink notes. “It would mean the body would still have to grow at a natural rate and it will take equally long for that body to become an adult that would take you.” And of course, this all assumes that your clone’s neural patterns happen to be compatible with yours – since you’re living two different lives up until that point, that might not be the case.

“At some point, you’ll be younger than your children. So the question is how will we as a society and as individuals deal with that.”

So if transferring our memories to another body isn’t feasible, what about downloading them into a computer? Living a literal digital existence as an electronic avatar is another time-honored sci-fi concept – only this time wealthy individuals truly are contributing huge funds to make it a reality. “There’s another effort out there [called] the 2045 project, where by 2045 people want to be able to download their personality into some kind of artificial avatar,” Dr. Fink continued. “And there’s lots of money behind these efforts, so people take it seriously, and try to you know, push the boundaries in that direction as it’s being displayed in the movies.”

Being able to literally live in our computers might sound ridiculous, but given the huge technological leaps we’ve made in recent years it might not be such a stretch. After all, we’ve already created computer systems that dwarf the human brain in terms of sheer processing power, and we’re always being told that true artificial intelligence is just around the corner. But as Dr. Fink points out, the same neural wiring that makes our minds so unique is even harder to recreate with non-organic tech.

“Our brain has about 10 to the 11 neurons, and each neuron is roughly connected to 10,000 other neurons. So that means you have a mass connectivity of 10 to the 15 connections in the brain,” he explains. “You would think then that if you put thousands of these neurons together to create a supercomputer that you would be getting closer to a universal brain or something. And the opposite is actually the case… there’s no emergent behavior, nothing… If you take 10 to the 11 rather simple neurons and interconnect them in this intricate way, all of a sudden you have a brain with a much larger capability than any computer, with parallel processing.

“So it’s this rather interesting paradox,” he continued. “You have simple ingredients [neurons], and you create this complex but not entirely understood brain. Or you have a very complex ingredient [CPU], and you put thousands of them together and it is [less capable]. So that is interesting, just food for thought.”

So humanity isn’t ready to transfer our brains into computers or other bodies – what other options for immortality do we have? Dr. Fink notes that by next year one procedure will have the chance to prove itself: Transplanting the entire head. It sounds like something from a horror film, but has some scientific basis and doesn’t require dealing with neural patterns. You just remove the head and quickly attach it to a donor body. 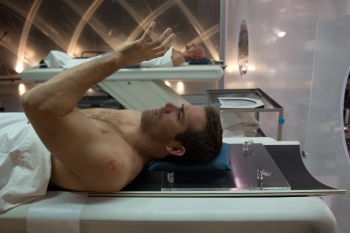 The surgery even has a volunteer – Valery Spiridonov, a Russian computer scientist suffering from Werdnig-Hoffman disease, a rare muscle disorder. Knowing he doesn’t have long to live, Spiridonov has dedicated his body to science, and intends to let his head be transplanted onto a brain-dead donor. Such surgery has been conducted in the past on animals, and while admittedly they didn’t live long afterwards, the principles behind the surgery are theoretically possible. Italian surgeon Dr. Sergio Canavero will use a fine blade to avoid damage to the spinal cord, then reattach it to connect all bodily functions to the brain.

While we can’t say for certain the procedure will work, there probably won’t be lines of people looking to casually swap bodies as a standard medical procedure. But it is the nearest feasible comparison to Self/Less that can be achieved with current technology. “That’s the claim, and that’s closest we can right now,” Dr. Fink explained.

Of course all this raises the question of whether we should aim for immortality. Even if technology advances to the point where each of the methods named above were possible, they’d have massive implications for human development and evolution. And that’s not getting into social and ethical matters. One obvious problem is wealth. Self/Less‘ procedure, like the real-world 2045 project, is funded by wealthy citizens – would these practices be made available to anyone without means? Could the rich live forever while the poor are left to die?

Dr. Fink adds that overpopulation could be a huge concern, since any functional immortals would continue to have children. Which brings up another side effect of messing with human progression. “At some point, you’ll be younger than your children,” Dr. Fink says. “So the question is how will we as a society and as individuals deal with that.”

On the plus side, given the current state of technology, we probably won’t be the ones needing to answer these questions – but our children might be.