Superman and Batman meet in a dark alley, somewhere in the backstreets of Gotham City. For whatever reason they aren’t getting along this evening and the two heroes decide to throw down to decide once and for all who’s the baddest dude in the DC Comics universe. Who wins?

For decades that question has plagued schoolyards, comic book shops and internet forums. It’s almost become a zen koan for the geek set, as there really isn’t a genuinely correct answer. Despite this, NetherRealm Studios (the company behind the excellent 2011 Mortal Kombat reboot) recently teamed with DC Comics to create Injustice: Gods Among Us, a fighting game based on DC characters that is equal parts Mortal Kombat, Street Fighter, comic books and epic bombast.

We’ll get back to the Superman versus Batman debate in a bit as Injustice really does offer an answer for that query, but first, let’s examine exactly what NetherRealm has wrought. As you’d expect, the key selling point for Injustice is that its roster includes 24 characters drawn from throughout the massive, storied DC Comics universe. NetherRealm has cast its net pretty wide in selecting fighters for Injustice, so while you have the obvious inclusions (like Batman, Superman, and Wonder Woman,) you also have lesser known characters like Black Adam and Hawkgirl. Given the overwhelming perennial popularity of the extended Bat-family it would have been all too easy for NetherRealm to fill the cast entirely with Bruce Wayne’s closest pals (and that occurs to a small extent), but by expanding the scope of the cast, Injustice provides an intriguing look at the DC universe for those who don’t own thousands of comic books. This should be seen as one of Injustice’s greatest strengths: Moreso than almost any other superhero-based videogame to date, it stands a great chance of turning your average, comics-illiterate fighting game fan into the sort who makes weekly trips to the nearest comic book shop. Even Capcom’s long-running, beloved Marvel vs Capcom franchise pales in comparison to the obvious affection NetherRealm has for DC’s characters, and this should be seen as great news for fans of the comics.

Plot-wise, Injustice tells a story that’s inarguably silly and over-the-top, yet should be instantly familiar to anyone who’s spent time poring over DC’s publications. Injustice takes place in an alternate reality (well, multiple alternate realities) in which Superman has been driven mad by the Joker’s latest scheme. The Kryptonian loses his mind with grief over the death of a loved one and decides that the best way to prevent future bloodshed is by taking control of the planet and ruling humanity with a despotic iron fist. Batman, being the voice of reason, doesn’t take too kindly to Superman’s decision and joins forces with a number of heroes and villains to topple The Man of Steel’s nascent regime. It’s nothing too complex, nor is it as cerebral as some of DC’s finest stories, but it serves as appropriate justification for characters who are normally on friendly terms to punch one another through conveniently-placed buildings.

But wait, how is it that a guy like Batman, who has no real superpowers to speak of, can go toe-to-toe with Superman, a character capable of tossing people into the sun? In truth, it’s best that you don’t think too hard about this. Injustice attempts to handwave this annoying bit of logic away with scant mentions of what the Joker calls “happy pills,” but in the end it’s best to just remember that Injustice is a collision of comic book logic and fighting game storytelling. In that light, the game presents a pretty solid tale, but don’t expect the story to be as intricately planned as the works of Alan Moore.

What you can expect from the story however, is a surprising level of depth, given the game’s genre. The story mode alone features four to five hours of cutscene-driven plot, periodically punctuated by one-on-one fisticuffs. Beyond that you’ve also got a relatively standard Arcade Mode (complete with its own character-specific plot lines), and the STAR Labs missions which, while similar to the Challenge Tower seen in 2011’s Mortal Kombat, are a greatly enhanced set of 240 challenges that could very easily drain dozens of hours from your life. It’s no hyperbole to say that Injustice may well have more singleplayer content than any other fighter to date, and that’s a huge plus for those who eventually tire of beating on people over the interne. Fighting games should always have a focus on multiplayer combat, but once that’s established, additional solo content quickly becomes the easiest way to separate the wheat from the chaff. Injustice is quite clearly wheat. 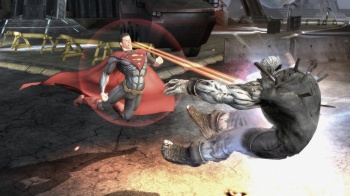 Combat in Injustice will feel instantly familiar to those who played Mortal Kombat, though it’s more accurate to describe the game as a mashup between Eastern and Western fighting game design sensibilities. Generally speaking, special moves are accomplished with Mortal Kombat-style “back-forward-back+attack” maneuvers, but realizing how popular Capcom-style “quarter-circle-forward+attack” moves are, Injustice‘s specials can all be accomplished using Capcom notations as well – even if you don’t set the game’s options menu to display attacks using Capcom’s terms. It’s unexpected, but somehow this mashup of disparate styles makes Injustice feel better, and more fluid than any prior Mortal Kombat games, which have always been a bit stiff in comparison to their Japanese counterparts.

Beyond that, the fighting system is relatively simple. Injustice gives you three attack buttons and a character-specific trait button. Almost any attack can link into any other attack, giving combat an impressively smooth feeling, but without straying into Dead or Alive territory, where it’s as easy to win by button mashing as it is by learning the intricacies of the game’s combat system. With this established, NetherRealm threw in a number of bombastic additions. Characters can interact with the stages they fight in: A good example being the Batcave, where one side of the arena features a button that will launch missiles from the Batmobile. Another stage allows you to punch your opponent through the halls of Arkham Asylum, watching with visceral glee as the ward’s supervillain inhabitants take turns pummeling your foe.

The two most explosive components of the combat system are its super attacks and clash attacks. The former is pretty self-explanatory: Each fighter has a single, major attack which can be activated by fully charging their super meter. Once complete, you press both shoulder buttons simultaneously and, assuming you connect, your opponent may be punched into space, crushed by a comet or have his or her spine broken by Bane. Clashes, however, are a bit different. Once activated, players are asked to wager a certain amount of their super meter. Assuming they wager more than their opponent, they win the clash, earning rewards like instant healing. Impressively, neither of these elements unbalances the game to any great degree, which is a testament to the work NetherRealm has put into Injustice.

Speaking of balance, while Injustice lacks the hyper-nuanced intricacies and complex depth of Virtua Fighter, it does seem to be as balanced, if not more balanced, than the recent Mortal Kombat. The hardcore tournament set will be the final arbiter of how successful Injustice is in the competitive fighting game world (and this verdict will take at least a few weeks to pan out), but initial impressions are promising.

The final component of Injustice lies in its online multiplayer modes, and in that regard, the game is a success. By lifting the best ideas from every fighting game released so far in this console generation, NetherRealm was able to create a title that stands toe to toe with all of its competitors, at least as far as its core feature set is concerned. Matches rarely feature appreciable lag, and in the rare moments in which you might notice network hiccups, they’re generally resolved immediately.

Now, let’s get back to that important question from the beginning of the review: Who wins in a fight between Superman and Batman? Injustice really does have an answer for this question, but honestly, it would be a shame to spoil the big dumb plot twist at the end of the game. Here’s a hint though: It’s neither of them, and yet through the wonders of comic book storytelling, it’s also both of them. If your brain shrieked and retreated from that logic bomb you’ll be appalled by Injustice‘s plot, but if it seems like the sort of quirky, crazy-high concept idea that has made comic books such an appealing medium, then you’ll totally dig Injustice: Gods Among Us.

Bottom Line: Injustice: Gods Among Us is big dumb fun, and anyone who digs superheroes or virtual fisticuffs will find dozens of ways to enjoy NetherRealm’s latest fighter.

Recommendation: Whether you’re a comic book fan or a fighting game fan, there’s a ton of reasons to love Injustice: Gods Among Us.