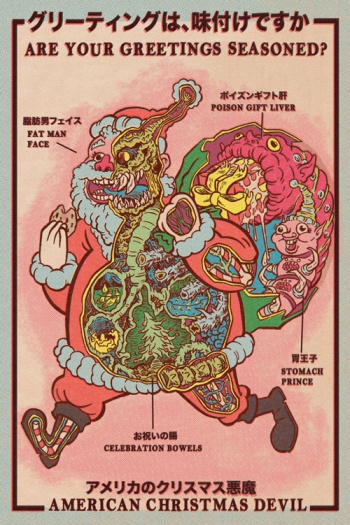 Santa Claus has never looked so terrifying, or quite so delightful.

Now that the Holiday Season is upon us, it’s time to legitimize the Postal Service’s existence by sending out a ton of greeting cards. If you haven’t found a set of nerdy cards to freak your friends and family out with this season, you may want to check out these Kaiju-anatomy Santa Claus cards, which are almost guaranteed to be the most bizarre things you’ll see all week.

The cards are being sold by Brad McGinty, a Minnesota-based comic artist and animator. According to McGinty, these are all that remain of his grandfather’s failed greeting card company that he tried to start after World War II. McGinty’s grandfather was working with an artist name Haruo to create cards that would appeal to folks both in Japan and the West. Unfortunately, the results were a massive failure and pretty much bankrupted his family:

The story of my grandfather’s failed card company was pretty well known in my family. My grandfather always insisted that it ruined his life and was the cause of his “whiskey fits.” Not only did he blame Haruo for the fiasco, but all of Japan for his financial ruin. He even went as far as to contact the Irish Press in 1956 with a completely fictitious tale about being swindled out of his money while trying to stop a Japanese murder plot against the Pope.

However, McGinty’s mother discovered a bunch of the cards in an old ammo tin. Now, the artist is selling them via his website in just about any quantity you could hope for. I’m not going to lie: I’d be tempted to send one to my mother if I wasn’t sure it’d give her a heart attack.