Focus is one of the most understated yet key elements in games, and Knack has it in spades. Every element is zeroed in on strengthening cohesion and ensuring players never lose sight of why Knack is fun. Knack 2 doesn’t have this. If anything, Knack 2 values noise above all else. What was once was a razor-sharp design is now a cacophony of distractions.

Figuratively speaking, at least. Noise in a video game is far messier than just sound, encompassing all aspects. The amount of visual detail in an environment, how often characters you’re not playing as interject in a scene, what prompts the player gets, and the various gameplay elements players are grappling with all contribute to that noise. It’s something that modern games have struggled with and, worse still, is often a result of trying to meet expectations rather than doing what’s best for a game.

You see, Knack 2 is less an iteration on Knack’s design than an outright replacement. Where its predecessor was like Crash Bandicoot if Crash were more of a boxer, Knack 2 is a clumsier God of War clone. That in itself is a disappointing shift for fans of the original, but it still could’ve worked. The real issue is that it tries to combine God of War with Uncharted’s presentation and style.

Knack starts players off with a brief cutscene and introduces them to its ideas organically over time. You start small and build your way up, learning about environmental hazards, dodging, sunstone energy, and your various moves at a reasonable pace. Levels are gorgeous but sparsely detailed so you clearly know where to pay attention. If there’s additional details in the world, they often lead to discovering a meaningful collectible.

On the other hand, Knack 2 opens with an already-in-progress battle where Knack is huge at the start, so we never really feel like he’s growing in power over time. While robots are attacking the city, there are now also civilians, destructible objects, and background details all drawing your eye away from the fight. At the same time, on-screen prompts and characters spouting awkward dialogue try to hastily explain Knack 2’s many design differences. There’s arguably more ways for Knack to fight his enemies and the story is aiming for a greater scope, but understanding what on Earth is happening is like detangling a clogged shower drain of hair. And it all comes back to the peers it copies.

The Uncharted games have always put presentation first, keeping gameplay as basic as possible to keep the focus on set pieces. You’re less a player, more the lead actor in a stage production; you do what Uncharted tells you to do, or it breaks. It distracts you from this by leaning on a constant stream of character dialogue, explosions, and moments that feign something more meaningful going on. In essence, Uncharted relies on noise to fill the otherwise fairly barren gameplay landscape. There’s enough space that it doesn’t get nearly as much in the way.

By contrast, God of War is carefully crafted chaos. It’s a roller coaster ride where you can freely express yourself, but only inside the small bubble provided while the world keeps moving despite you. There are things going on around you to make it feel epic, but the core combat itself is engagingly visceral and typically in focus. Instead of being spectacle all the time, God of War often relents, letting players just have at it against mobs of enemies. There are sections where gameplay and level design alone tell the story more than anything else, and that’s crucial. In all that carnage, God of War needs clarity for players to stay on target, lest they get distracted and stomped by a minotaur. Despite being so over the top, God of War actually needs far less noise to get the job done. 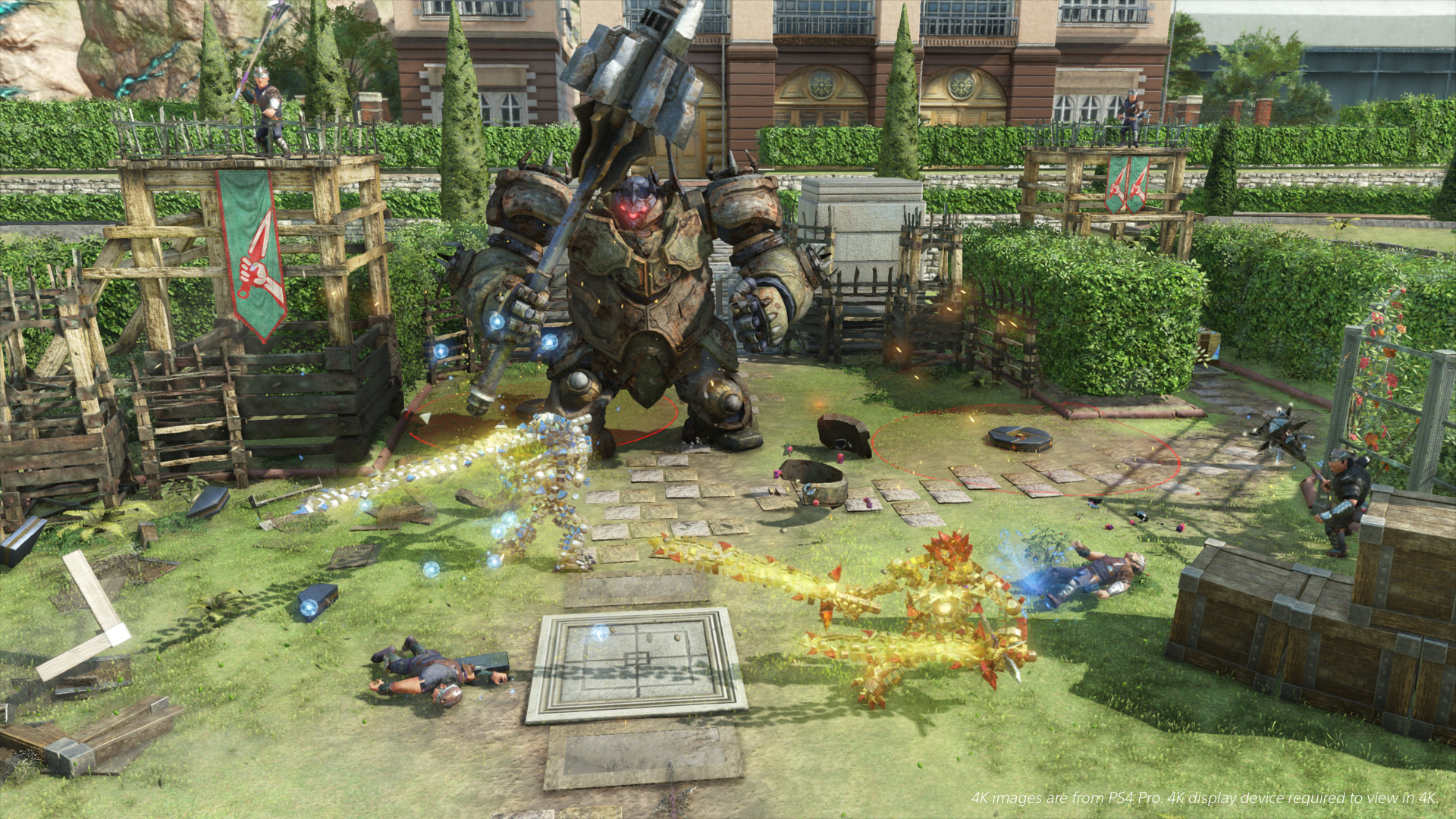 These are two very different approaches, and merging them results in a bland, cacophonous middleground. Knack 2’s quick time events aren’t often there for narratively interesting moments like in God of War, but they are instead used for Uncharted antics that could’ve just been platforming or a cutscene. Environments are lushly detailed, but also such a mess of moving elements that it can be harder to tell what’s interactable or not. What platforming and mind-numbing puzzles sections that are jammed in don’t work in service to anything, at best serving as awkward pace breakers. When you’re in combat, your companion Lucas and his friends will often yammer on with Knack over the combat, drawing your attention away from fighting.

This distraction is such an issue that it can’t be a coincidence that Knack now wields not one but two types of shields. One is automatic but requires sunstones to be charged, and the other is triggered manually. What’s more, several enemy types reward you for standing in place and waiting rather than acting. Rather than having interrupt windows, they have a cooldown period where players can then strike easily. It’s a total reversal from its predecessor’s emphasis on ducking and weaving, actively discouraging any thought on the player’s part. Now, your dodge and jump moves are redundant leftovers. Instead of adding something, this new feature makes for a louder and inferior experience.

This just keeps happening. Environmental obstacles persist, reclaiming sunstone energy takes time, and the expanded move set theoretically adds something — yet those obstacles are ineffectual, sunstone crystals are abundant, and your new moves don’t offer much utility. The needs of cutscenes hold greater sway than level cohesion, forcing the story to jump abruptly ahead.

The biggest crime of all of this though is that the central idea of Knack starting small and growing larger doesn’t exist anymore. You stay human-sized or larger for the majority of the time, using his small form for token moments. In the end, Knack isn’t even the person who saves the day this time. Instead, a character who by that point is infinitely more whiny and annoying is the one who stops the destruction of human civilization. We’re told these two are partners, yet in the end you feel like his giant sidekick who occasionally shrinks down to find a collectible.

Knack 2 is an ill-fitting mixture that emphasizes nothing but the worst parts of its respective peers. There are elements, like a tacked-on progression system and enemy variety being pared down, that I could go on about further, but it all stems from this central lack of clarity. Knack 2 is less a game and more a series of tropes and ideas that have proven popular with modern gamers, especially Sony fans. Knack is best as Knack, not Uncharted or God of War. Rather than a triumphant return, Knack 2 is easily one of the most forgettable, homogenized exclusives on the PlayStation 4. There’s no reason to play it over a myriad of other options. All Knack 2 manages is to be loud and boring.

Next Generation of Geek: When Should I Let My Child Have a Headset?