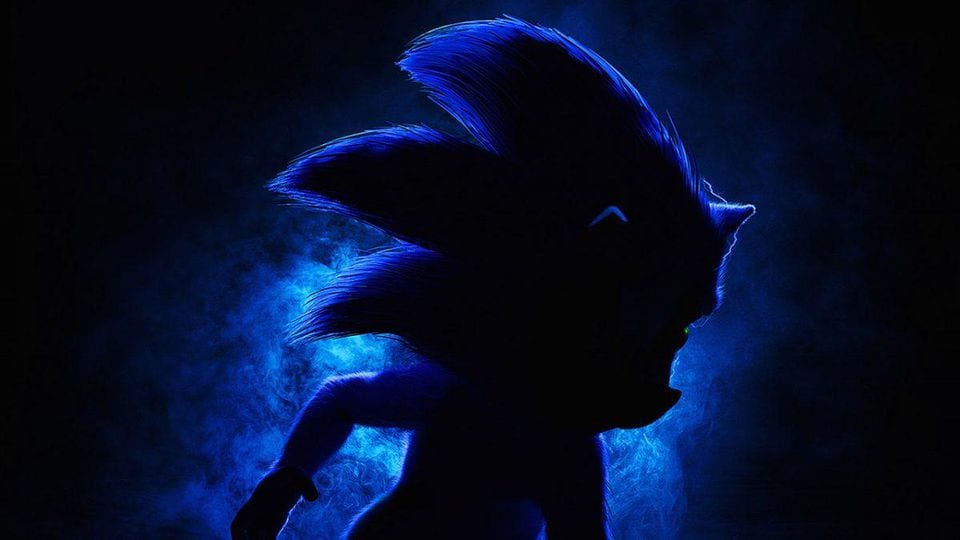 Paramount Pictures has released a teaser poster for the 2019 Sonic the Hedgehog movie which has shown us three things:

I was a Sega Genesis kid and I grew up on Sonic. I watched the cartoons, read the comics, and hoarded my allowance to buy a Dreamcast just for Sonic Adventure. I started writing Sonic comics in 2006 and remain the primary creative mind behind those comics to this day. I’ve also written episodes of the Sonic Boom animated series and game/web-exclusive comics for Sega. I know Sonic. He’s in my blood. My doctor is concerned.

On the one hand, I’m right there with disgruntled fans. The reveal, and the talk coming from those involved with the film, seems tone deaf. When your protagonist is a cyclopean, noodle-limbed cartoon, any attempt at realism is a lost cause. We’ve seen Sonic work on the silver screen with his cameos in Wreck-It Ralph. Pixar’s Cars franchise has shown us the “two pupils, one eyeball” thing can work in an expressive, emotive way — and on characters with less human aspects than Sonic. As legendary Sonic designer Naoto Ohshima recently said on Twitter: “Mickey doesn’t become a mouse in live action, does he?”

But I think we need to collectively step back and look at Sonic’s other animated incarnations. He’s had five televised cartoons over the years. None of them, despite their passionate fans, have gotten Sonic “right.”

Adventures of Sonic the Hedgehog got some things right. Sort of. Not really.

Adventures of Sonic the Hedgehog ran from 1993 to 1996 and arguably came closest to the mark. Sonic and Tails embarked on short adventures through psychedelic landscapes to save some hapless local from the goofy Dr. Robotnik’s latest scheme. It failed on the details: Sonic jumped in and out of costumes like Bugs Bunny, and the world took the weirdness of the games’ terrain and dialed it up to almost Escher levels. Guest characters ranged from tired tropes (Breezie the sexy hedgehog robot) to Saturday Night Live knockoffs (Da Bears, a pair of bears with Chicago accents). The show’s gags were polarizing, and Robotnik spent at least one episode entirely too naked.

Sonic the Hedgehog, more commonly known online as “Sonic SatAM,” ran during the same time. Where Adventures of embraced the weirdness of Sonic a little too tightly, SatAM abandoned it for grim, ‘90s eco-awareness. Vibrant landscapes were replaced with grungy factory cities and muddy green and brown natural areas. The googly-eyed badniks were passed over for towering, black-armored SWATbots. The cackling Robotnik in Micky Mouse pants was now an obese, robotic-armed tyrant brilliantly voiced by Jim Cummings. The story revolved around series original Princess Sally and her quest to oust Robotnik, find her deposed father, and reclaim her kingdom. Sonic had some personal stake in everything too, but he was primarily Sally’s foil and a deus ex machina solution for each episode’s threat.

SatAM’s spiritual sequel arrived in 1999 with Sonic Underground. It involved much of the same production team, and some of its elements still present. If SatAM wandered off the Sonic path, Underground was just lost. Sonic was now one of a set of royal triplets who were also an anti-establishment band sent into hiding by their mother Queen Aleena when she was overthrown by Dr. Robotnik. Where SatAM had recognizable animals running around, Underground introduced us to truly alien and grotesque creatures. Every episode treated the viewer to an extended musical number from Sonic and his siblings, Sonia and Manic.

Sonic X had promise when it started in 2003. Sonic and his friends were transported to Earth when one of Dr. Eggman’s experiments backfired. Things started out well: Sonic and his friends were finally on-model and battling Dr. Eggman’s robots in a “Monster of the Week” formula. But being set on Earth meant there were humans, and Sonic was saddled with boy sidekick Chris Thorndyke. Chris became a central figure in the series, going so far as to supplant the Sonic characters in some stories as the show went on to adapt the Sonic Adventure series. Even when Sonic and his friends returned to their own world to fight robot-dragon-aliens, Chris lingered like a wart.

Finally, there was 2014’s Sonic Boom. To its credit, the show explicitly differentiated itself as a spin-off from the main franchise, shifting its tone and starkly redesigning the cast. The jokes about Boom should be fresh in the minds of any Sonic fan: Did Sonic stop shaving his arms? Did Knuckles skip leg day? What’s with all the sports tape? Snark aside, I think Boom deserves a pass since its a spin-off — not the Sonic.

There are some honorable mentions, namely the Sonic the Hedgehog: The Movie OVA and the limited web series Sonic Mania Adventures. The former had Sonic rescuing the President’s cat girl daughter, Sara, and battling Metal Sonic in the Land of Darkness. The latter had Sonic and his friends battle Dr. Eggman and Metal Sonic for the Chaos Emeralds. I’ll let you take a guess which one felt the most authentic. (Hint: anything involving Sonic Mania is the most authentic.)

Every time Sonic has been animated, though, it’s wrong. Whether it was through tone, art direction, characterization or some combination of them, they all went off script. And as you will inevitably see in the comments below, each one has its defenders. Each one was someone’s first exposure to Sonic, or even their favorite incarnation. The same will be true for this movie. Those of us in our thirties might point to the movie poster and say: “That’s not my Sonic.” But our kids won’t. And ten years from now, when the next series or movie revamp comes out, they’ll be rolling their eyes and saying the same thing. That’s the real “Sonic Cycle.”

Bumblebee Is the Little Transformer That Could