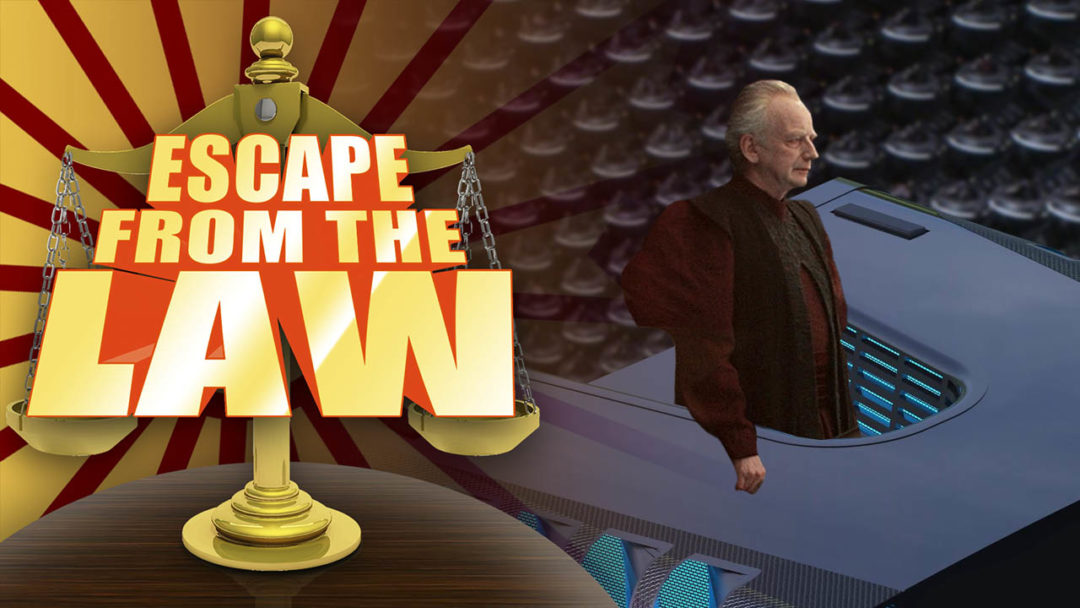 1. From a legal perspective, what do you think is the largest in-universe problem in Star Wars?

There are actually several huge in-universe problems in the world of Star Wars. The most obvious ones to come to mind are child soldiers, planet-killing machines, and animal abuse. But these problems share a common root cause — a lack of respect for international (or, in this case, interplanetary) law.

We see this problem from the very start of the Skywalker Saga. The opening crawl in Episode I reveals there is a conception of interplanetary law, but those laws are flagrantly ignored by all interested parties. The Galactic Republic is in the midst of a tax conflict with the Trade Federation. In the most telling exchange, Darth Sidious (aka Senator Palpatine, aka the Emperor) instructs an official from the Trade Federation to unleash an unlawful invasion of Naboo. The official asks, “My lord, is that legal?” Sidious responds, “I will make it legal.” Things only go downhill from there, and by the time we get to Episode IV, there is no trace of an interplanetary organization, nor are there any treaties, pacts, or any other governing laws.

Earlier this year, I considered what “The Trial of Thanos” would look like if the Avengers managed to capture Thanos alive. When it comes to Darth Vader, Kylo Ren, or Emperor Palpatine, the same question would have a much more succinct answer: There could be no trial, since there were no laws in place for those men to violate. Instead, all we would have would be victor’s justice. If only we had more Cosmic Wars…

2. I read an article that described some new cool-looking PlayStation patents. Does that mean I’ll see that technology incorporated into the PlayStation 5?

Maybe, but probably not. A patent filing is not the same as a product announcement, and companies file lots of patents for technologies or inventions that never see the light of day. One of the reasons why this happens is because patents are granted on a first-to-file basis. This gives companies an incentive to apply for a patent as soon as they can, to minimize the risk that a competitor will patent the same or a similar invention. In other words, if the company thinks there’s even a possibility that they or one of their competitors will want to use the invention, they will apply for a patent as soon as possible, even if it’s not certain that the invention will end up being used.

It’s also worth noting that companies might not know whether a particular product will be economic or scalable at the early stages. The fact that a company can make a flying car doesn’t mean that the car will be affordable to a consumer.

When it comes to the PlayStation 5, the patents that have come out so far don’t have enough information to justify a conclusion one way or another. However, the fact that the PlayStation 5 launches next year means we’re likely to find out sooner rather than later.

3. I saw an ad for Xbox One that said that “The Xbox one is the greatest thing that’s ever happened to mankind.” Doesn’t that violate false advertising laws?

Surprisingly, that does not violate false advertising laws. False advertising laws prohibit companies from lying about their products. For example, a company cannot claim that a hard drive has a storage capacity of 1TB when it actually has a capacity of 500 GB. But the law does not prohibit companies from making over-the-top or exaggerated claims about their products. While different courts have different opinions on the matter, the key distinction between unlawful false advertising and legally permissible puffery is whether an ordinary consumer could be expected to take the claim seriously.

This means that Apple’s claim that Siri “changes everything” is allowed, even though Siri didn’t really change much at all. Similarly, Sony’s claim that the PlayStation 3 “does everything” is also allowed. As a general matter, claims that can be scientifically or objectively tested must be truthful, while claims that present an opinion or rely on subjective expectations can bend or distort the truth. Ironically, this means that, past a certain threshold, the more extreme and untruthful a claim is, the harder it is to use the claim as the basis for a false advertising claim.

4. What is the largest legal threat to video games?

Watchmen for HBO Is Constructed with Clockwork Precision

The Rise of Skywalker Wants to ‘Fix’ The Last Jedi: The Results Are a Nightmare

Pureya Is a Free, Frantic Minigame Collection Where the Gameplay Constantly Shifts

Compared to Legion and Crazy Ex-Girlfriend, WandaVision Is Still Stuck in the Past