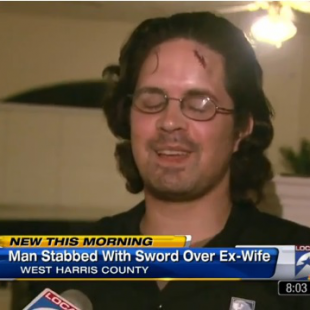 A Texas resident was hospitalized with multiple stab wounds after an altercation involving a replica Master Sword.

It all began this past Saturday when Eugene Thompson got into an argument with his girlfriend’s estranged husband, whom she had invited to her home. The altercation quickly became violent, leading Thompson to retreat to his bedroom where he had several swords, including a replica of the Master Sword from The Legend of Zelda. “I heard him heading to the bedroom where I was, so I jumped in the closet and I grabbed one of my replica swords, and I pulled it out and stood at the doorway, and he was coming down the hallway at me while I was yelling, ‘Go away, you don’t live here,” explained Thompson. “He just walked right into the point of the sword, I don’t know if he thought it was a toy.”

After the initial stabbing the husband left the house and Thompson locked the door. Unwilling to actually leave however the husband broke through the front door and the fight continued. According to police deputies the two brawled over the sword resulting in several more stab wounds for the assailant. Thompson meanwhile came out with a nasty cut on his head after his girlfriend’s husband “dinged” his head with a flower pot. Both men were transported for treatment (at separate hospitals) after police arrived.

Now, obviously we don’t want to make light of what was likely a scary situation, especially since Thompson’s girlfriend’s husband was in critical condition after the fight was broken up. That said, the assailant should probably consider himself lucky it was just the Master Sword. If it had been the Biggoron Sword he’d probably be dead.

11 Percent Of Americans Think HTML Is an STD