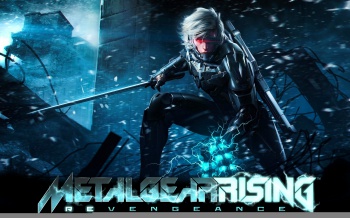 Kojima Productions has spent the better part of a decade turning the once-effeminate Raiden into a testosterone-infused badass. To help the studio reach this goal, they wisely placed Raiden in the hands of Platinum Games, a company that knows a lot about cybernetic martial arts. With Metal Gear Rising: Revengeance you can finally play the same freakishly skilled character that you could only watch in the cutscenes of Metal Gear Solid 4. The game mostly succeeds in pulling this off, even if this isn’t Platinum Games at their best.

It is intriguing to experience a Metal Gear storyline that takes place after the events of Metal Gear Solid 4, especially considering the feeling of finality in that previous installment. Not having Solid Snake around does feel odd, but there is also a “clean slate” quality to Revengeance. This is the first opportunity to see Raiden outside of Solid Snake’s shadow. He continues to be a self-proclaimed agent of justice and he carries out assignments as an operative for a private military company. Many of his targets happen to be just as skilled as him, agents who work for PMCs that support terrorists.

These missions make up the basic game flow of Revengeance. It follows the classic linear action game structure where there’s a boss to look forward to at the end of each chapter. Presented in an expansive variety of third person views, the path to each boss is full of enemies of many sizes with some platforming areas in between. Raiden has enough moves and combos to take on any enemy, no matter the size, even if he needs to leap a couple stories to do so. Kills yield points, and those points can be spent on practical and cosmetic enhancements.

Even though Revengeance is a spin-off, it is still canonical to the Metal Gear timeline and supported by liberal amounts of fan service. There’s no new insight on the series’ key players and events, but fan-familiar organizations like The Patriots do get the occasional namedrop. Like Snake, Raiden has his own support team, including the obligatory scientist and someone to save your game. There are echoes of quotes from previous games like “Kept you waiting, huh?” Just to thrash and be thrashed by familiar mechanized foes in ways not seen in previous Metal Gear games is fan service in itself. Raiden’s new melee takedowns, especially in contrast to Solid Snake’s ranged attack methods, look remarkable, whether the victim is the familiar Metal Gear Gekko or any of the new bosses.

As fans might remember, Raiden took his first step toward the cyborg ninja arts when Solid Snake gave him his first high frequency blade. This transformation feels wholly complete in Revengeance, especially when you see him breakdance into a fight, wielding a blade with his feet. While he is still able to sneak, this isn’t the Raiden of MGS2. If you have any doubts that an action based Metal Gear game would be just as engrossing as any of the sneaking-intensive titles before it, Platinum Games erases them before the end of the first hour. It’s a thrill to see Raiden confront his mechanized nemesis from MGS2, Metal Gear Ray,and that’s followed with a sequence where Raiden uses a stream of incoming missiles as a bridge to confront a gunship. It’s fittingly absurd, but not out of place when you recall Raiden’s anime-inspired action sequences in MGS4. 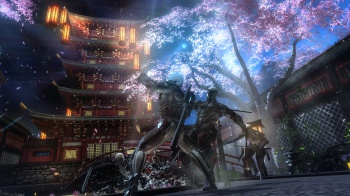 For all that can go on in a single fight, it’s remarkable how much mileage you can get out of using only three or four buttons. It’s a contrast to other fast paced action games that assign gameplay commands to every available button on a controller. This might make Revengeance appear shallow by comparison, but that’s hardly the case. It is impossible to button mash your way to the end of the first chapter, let alone the end of Revengeance. Revengeance is quick to punish you if you don’t know the mechanics, particularly blocking. The tutorial is presented in the classic, yet clinical Metal Gear VR simulator. It is not especially entertaining but you’ll appreciate its conciseness. Outside of Raiden’s grandiose finishing moves, blocking comes a close second as one of the most satisfying aspects of the game. It’s an instant reward for staying on your toes. Whether you’re taking on regular infantry or bosses, blocking makes you feel well rounded enough to take on any challenge in Revengance, however demanding they might be.

A block can trigger the “Zandatsu”, an over the top sequence that slows down time and gives you the opportunity slice up your target into hundreds of pieces. It is the closest any game has come to being a playable action anime. There is substance to all this style and practical motivation to pull off spectacularly gruesome kills. Ripping out a victim’s synthetic spine yields health regeneration for Raiden, which creates an addictive risk/reward loop throughout the entire game.

There are numerous non-melee sequences that showcase Raiden in many death-defying events, which help break up the traditional game flow. These include intensive platforming and chase sequences. It’s too bad that surviving many of these brief camera changes requires one or two retries to understand what’s going on. Failing at these overly dramatic sections even once reduces the sense of accomplishment and it doesn’t help there’s so many quick time events, since all you have to do is memorize button sequences.

Revengeance retains Platinum’s penchant for itemizing and rating your performance, grading you harshly whenever you’re less than perfect and Revengeance definitely motivates you to replay for better ratings. That’s partly because subsequent replays still provide a challenge. You might be more familiar with bosses’ attacks and the cues that precede them, but you still need the dexterity and presence of mind to keep up with the foes’ ever-changing move repertoires. This means repeated playthroughs can be addicting and it makes up for the campaign’s initial five to six hour playtime.

With Metal Gear Rising: Revengeance, Kojima Productions and Platinum Games have retooled Raiden into a capable character who is finally justified in having his own game. By taking him out of covert missions, Raiden’s able to wield his sword of justice and use his martial arts skills out in the open. This is more fitting to him than sneaking around in a cardboard box, which is possible in this game in case you want to pretend you’re still Solid Snake, even just for a minute.

Bottom Line: Metal Gear Rising: Revengeance is a reminder that not everything in the Metal Gear universe has to move at a snake’s pace. While there are more rewarding stylized action games out there, there’s just enough depth in Revengeance to make it a worthwhile purchase, especially for those who follow Platinum Games.

Recommendation: If you’re a Metal Gear fan who doesn’t mind a canonical installment without Solid Snake, or if you’re a Platinum Games fan who wants a shallower version of Bayonetta, Metal Gear Rising: Revengeance is worth checking out.

Watch Dogs May Release for Wii U