Naughty Dog’s PR machine made a lot of noise over the past year about how its apocalyptic infection is based on a real species of fungus, Cordyceps, that mind-controls ants, turning them into zombie slaves. It’s both disingenuous and too modest. Though the infection in The Last of Us does in some ways mirror the Cordyceps species, in reality the infection’s symptoms and ability to control hosts is an amalgam of several different parasites. However, what’s truly impressive is that Naughty Dog’s fictional parasite has an identifiable life cycle that both holds up to internal logic and retains just enough plausibility to make it scary.

In The Last of Us, a novel Cordyceps fungus makes the jump from insects to humans, quickly wiping out 60% of the world population. For both crafting visuals and creep-out factor, using the fungus was a master stroke. Cordyceps is a genus that includes at least 400 known species of fungi. Each of those Cordyceps species has evolved to target a single species of insect as its host – some thrive only in bullet ants, some in caterpillars, and others target other fungi – but all of them do roughly the same thing. When the fungus spores land on an insect, they begin to grow, burrowing themselves down into the creature’s carapace.

Once inside, the fungus spreads throughout the insect’s body, pushing its spear-like growths through the bug’s inner tissues, eating the host from the inside. In most cases, when the host is dead and hollow – nothing but empty carapace – the parasite pushes its fruiting, tendril-like growths through the empty armor, erupting from the host’s body. Spores then burst from the tips of the fungus, floating to a new host and beginning the cycle anew. The fungus can create impressive displays that look like multicolored clamshells, clusters of pink coral spines, cauliflower clubs and white corkscrews. They might almost seem beautiful if they weren’t rising from the agonized cadaver of a spider or moth. Visually, the Infected owe a great deal to Cordyceps – the fungi clearly inspired the clickers’ faces as well as the bodies plastered to walls, skin erupting with plate-like growths. It’s something simultaneously attractive and repulsive that we’ve never seen before, making the infection the perfect candidate for a horror game. However, the real similarity to Cordyceps is how the fictional infection can take control of its host.

Naughty Dog based the infection on a species of fungus, Ophiocordyceps unilateralis, that has a unique ability to manipulate its host’s behavior. After boring into a bullet ant, O. unilateralis infects the ant’s brain, driving it to climb up a plant stem and clamp its mandibles onto the bottom of a leaf. Then, suspended 25 cm above ground, the fungus eats the ant from the inside out and, over the period of a few days, extends a single stalk out of the ant’s head to release its spores. Science writers made the fungus notorious when they dubbed the manipulated hosts as “zombie ants,” but that’s not exactly accurate. Though scientists aren’t yet sure how the fungus alters the ant’s behavior, it’s likely tricking the host rather than actually controlling it, leading to the more proper (but less sexy) term of “behavior manipulation.” 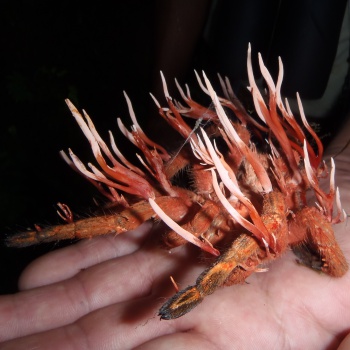 Though the exact process O. unilateralis uses remains a mystery, the purpose of it is clear: placing the ants this way makes reproduction more efficient. With the fruiting fungus suspended in air, its spores can travel further, giving them a greater chance to infect another host. It’s an effective tactic, too. O. unilateralis can wipe out entire ant colonies. The infection is so dangerous that when worker ants recognize signs of infection, they carry the infected ant as far away from the colony as possible and abandon their convulsing bodies to prevent the fungus spreading. In The Last of Us, despite all humanity’s advancements they deal with their own Cordyceps infection not much differently from the ants – take the infected, shoot them, dump them and forget them.

What’s really interesting, however, is how much attention to detail Naughty Dog paid to fleshing out the life cycle of the infected – and their ability to control their hosts. Though the infection is principally based on O. unilateralis, in reality it’s more of an amalgam of different parasites that practice behavior manipulation. After all, many organisms ranging from viruses to fungi propagate themselves by playing puppeteer with their unwilling partners. The phenomenon is common enough to have its own fledgling branch of science known as neuroparasitology, and scientists are just beginning to understand the mechanical and chemical processes parasites use to control their hosts. Some parasites cause the host to be attracted to light, others produce dopamine or increase hormone production, while some alter the central nervous system – others, like O. unilateralis, are still a mystery.

In any case, most organisms use behavior manipulation as a tool in their reproductive cycle. The jewel wasp, for example, will attack a cockroach and inject its venom into the unlucky bug’s brain, blocking its escape reflex. The wasp then takes the cockroach’s antennae like a leash and leads the docile creature to its burrow to become a living vessel for its eggs. Hairworms, which live in water, actually gestate on land inside cockroaches, katydids and beetles. When the worm attains its full growth, it mimics the host’s neuromodulators, driving the insect to commit suicide in water where the parasite can wriggle free and begin adulthood. Others trick mosquitos into drinking less blood from each source, causing them to seek out more sources of blood and therefore increasing the chance of transmission. Vertebrates aren’t immune to the neuroparasite’s spell, either. The feline parasite Toxoplasma gondii actually gets to its preferred host through infecting rats and mice, then altering the host’s brain so that the rodent becomes attracted to, rather than afraid of, the smell of cat urine. When the cat consumes the confused rodent, it ingests the parasite as well. 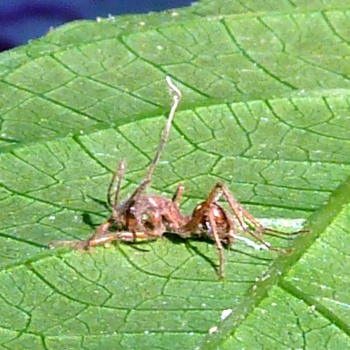 This form of behavior manipulation is clearly present in The Last of Us. You may have noticed, for example, that the infected tend to congregate inside buildings and underground, preferring damp, enclosed spaces. Not only does this seem to be ideal conditions for the fungus to fruit and release spores – you always find the worst nests inside hallways and closets – but it also concentrates the spore density, increasing the chance of transmission to a new host. Likewise, the fictional Cordyceps seems to compel some of the early-stage infected known as “Runners” and “Stalkers” to seek out and attack humans, spreading the infection through tainted saliva. This too, has precedent in nature – the rabies virus infects the host’s brain, making it unusually aggressive and more likely to attack and bite another animal, transmitting the virus. Violent outbursts are known to occur in humans as well. One rabies patient in Manila recently went on a rampage, attacking people, beating them with wood and causing enormous property damage before he was restrained – which sounds fairly similar to the Runner’s fist-pounding rage.

Clickers and Bloaters, on the other hand, seem to play a different role in host manipulation than the more aggressive and situationally-aware early-stage infected. Advanced-stage infected seem primarily defensive in nature, patrolling the areas where the Cordyceps breeds, keeping the fungus safe from any external threats that may kill it before it has a chance to fruit and release spores. Advanced-stage infected don’t actively seek out new hosts and aren’t generally aggressive unless a threat comes into their immediate area – Clickers leave well enough alone unless they blunder into a survivor or hear a threatening noise, and Bloaters only emerge from extremely advanced (and vulnerable) pockets of fungus when intruders threaten the health of a large colony. In both these cases, Clickers and Bloaters use their host body to defend the fungus in the hopes that it will survive to maturation.

This behavior, known as “bodyguard manipulation,” is the modus operandi of several species of parasitic wasps, which lay their eggs in caterpillars then manipulate the compel the dying host to defend their young. When the pupating parasitoids have eaten their fill from the caterpillar’s still-living organs, they exit the body and form a cocoon mass. The fatally wounded caterpillar then coils his body on top of the cocoon and lashes its head around, defending the pupae from any predators that come near. It’s a terrifying thought – an animal that can get into your brain, nudging and rearranging, playing your nervous system so that you’re acting in its best interest without you ever knowing. It’s a nightmare scenario straight out of Invasion of the Body-Snatchers, but thankfully, parasites that control human behavior exist solidly in the realm of science fiction, right?

Wrong. In fact, you may have already been under their influence without even knowing it. In a 2010 study, researchers at Binghampton University discovered that exposure to influenza significantly affects social behavior. According to their results, participants exposed to the flu virus through a preventative vaccine nearly doubled the number of people they came in contact with in the 48 hours following exposure, as opposed to the 48 hours beforehand. As if that’s not scary enough, the participants were also more likely to attend large social gatherings like parties, thereby increasing the possibility of passing on the infection. It isn’t just the flu, either. Toxoplasma gondii (the cat parasite) has been found in humans as well as cats and rats – it’s one of the most common parasitic infections, estimated to affect about one-third of the population in developed countries. Strangely, those infected with T. gondii show a greater incidence of car accidents, suggesting the parasite may be dampening human fear the same way it suppresses the fear instincts of rats (though this may also be due to slowed reaction times, which are a symptom). Likewise, it seems that T. gondii infection may increase the production of testosterone over a long period of time – female students rated their infected male peers as having more “masculine and dominant” features, and infected men were on average 3 cm taller than uninfected men. This lines up with findings about T. gondii in rats, where female rats were more attracted to infected males. But it isn’t all height-boosting and sex appeal – at least forty studies have linked brain cysts caused by T. gondii as a possible contributing factor to schizophrenia, depression and even suicide. When you consider that there may be a parasitic infection manipulating the personalities of up to one-third of the population, suddenly The Last of Us seems more like an exaggeration than outright fiction.

Neuroparasitology is still a young discipline, but it seems likely that the more we find out about how parasites affect humans, the more we may discover that we are not wholly the masters of our own minds, and that something else is up there, discreetly pulling our levers. Given the holes that still exist in our knowledge, it’s the perfect realm for science fiction to step in, and I’m glad that Naughty Dog decided to create a more scientific outbreak – tracing the infection’s life cycle from spore release, to infection, to host manipulation, death and spore release – rather than rest on old zombie clichés. It’s an approach that seems far scarier for its plausibility, and I can’t wait to tell everyone about it. I want to bring it up at the next cocktail party I go to, or maybe at a restaurant, or in a crowded subway car.

At least I think I want to do that – maybe I just have the flu.

Shadow Warrior Preview – All the Wang You Can Handle