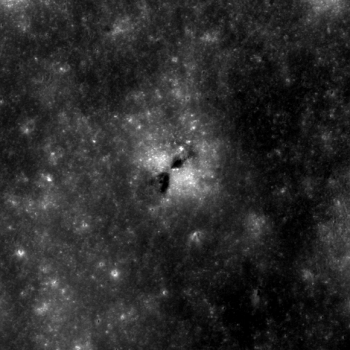 NASA believes it has discovered the wreckage of the famous space probe, the Lunar Orbiter 2, on the surface of the Moon.

On the 24th of November, 1966, suspended 28.4 miles above the surface of the Moon, the Lunar Orbiter 2 took a photograph of the Copernicus crater. The photo was one of twelve “housekeeping” shots intended only to use up the last of a roll of film; the interplanetary equivalent of taking a picture of the hotel toilet while you’re on holiday. It was one of the first photographs to show the Moon not as a distant gray mass dotted with holes, but as a very real landscape, and it went on to be called “The Picture of the Century,” by the press at the time. After taking the picture and (kind of) completing its mission to map out potential Lunar landing sites for the Apollo missions, the Orbiter 2 was commanded to crash land on the far side of the Moon. Its wreckage has never been found, up till now at least.

The boffins at NASA believe that the photograph in the corner there, taken by another Lunar Probe, this one designed to map out landing and solar power sites for the now defunct Moonbase program, shows the Lunar Orbiter 2’s final resting place. The distinctive “butterfly”-shape of the crater itself, which is indicative of a low-angle of impact, and fact the crater is exactly where NASA predicted the probe would come down certainly adds some credence to that belief.

The “photograph of the century” was the Lunar Orbiter 2’s biggest success. Its mission to map out potential landing sites, not so much. While the photographs, taken via clunky 1960’s technology, were impressive for the time, they weren’t of a high enough resolution to highlight potential hazards to the landing craft, a problem that very nearly resulted in disaster during the first Lunar landing attempt. At a height of 400 feet the Apollo 11 Lunar module’s autopilot, acting on information from the Orbiter 2, attempted to land the craft in the middle of a field of huge-ass boulders, forcing famous astronauts Neil Armstrong and Buzz Aldrin to pull some hairy “leaf on the wind” style maneuvers to prevent a crash landing.

Successful in its original mission or not, NASA scientists are still keen to get a better look at the Orbiter 2’s wreckage and are repositioning their current Lunar probe for a clearer shot of the potential crash site.

Minecraft Middle-Earth Will Melt Your Mind

The Battleship Movie Trailer Is Here!