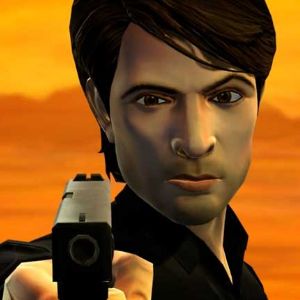 Jane Jensen’s Moebius: Empire Rising is billed as a metaphysical thriller, but it’s really not very thrilling at all. There’s a potentially good story in there somewhere, but it’s laid low by awkward plot twists, paper-thin characters and a slavish devotion to old-fashioned adventure game mechanics.

Moebius: Empire Rising is played, mostly, as Malachi Rector, an antiques dealer and appraiser who fits nicely into the character archetype that’s grown popular in television shows from House to Elementary: socially maladroit but so sparklingly brilliant that people put up with his brash rudeness. He serves a very exclusive and wealthy clientele, traveling around the world to tell them whether they’re investing in genuine and valuable antiquities or being fleeced by shady con-men.

It’s a unique talent that earns the attention of FITA, a secretive government agency that recruits him to investigate a young woman who’s been murdered in Venice: Not the murder itself, but the victim, a strange distinction that’s central to the story and so of course isn’t clarified until much later. As part of his investigation, Malachi must analyze many of the people he meets, collecting “data points” about their lives and then comparing them to real-life people throughout history. The idea is to determine if a person has any connection to famous figures from the past, and the process of narrowing down a large pool of candidates to a single individual is a pretty cool bit of puzzling – until you realize that you can’t get it wrong.

You can get it wrong, but doing so only results in being told you chose incorrectly and must try again. There’s no penalty for blowing it, no lost conversation options or need to find another, more difficult way to get the job done; you just keep trying until you get it right. The analyses generally aren’t terribly difficult so it’s not as though you’re likely to spend much time with them anyway, but the realization that you literally cannot fail at the game’s most central mechanic really sucks the urgency out of it.

It also never stops being painfully obvious that Moebius is a point-and-click adventure. Malachi is a real globe-trotter, flitting to Venice, Cairo, Zurich, Washington D.C. and beyond, yet the game world feels extremely shallow, filled with everything he needs to advance his quest and not one iota more. There’s no substance to it, no depth; everything is spartan and obvious, and it completely fails to come alive as a result.

The lead characters are similarly flat. Malachi is an unrepentant jerk but so magnificent that men and women alike will do just about anything to be with him; the much more mundanely-named David Walker, an ex-special forces soldier who joins the cast midway through as Malachi’s bodyguard, is unflinchingly stoic and noble; and Gretchen, Malachi’s office manager and obviously long-suffering apologist, seems eternally grateful to be treated slightly better than a dog whenever he shows up for work. Even a “date” between David and Gretchen is just a brief bout of cheap exposition meant to impress upon players how dark and mysterious Malachi really is, but it’s all tell and no show, and reveals absolutely nothing of either of the two characters who are actually involved in the scene.

Some of the narrative shortcomings in Moebius can be attributed to the demands of the video game format, but that part of the equation is problematic as well. Much of it is simply a case of technical overreach; the game can be sluggish, with awkward pauses before animations or conversations begin, and the need to properly position characters sometimes leads to them walking away from a location, then turning around and walking back to it before undertaking a task. They stand and move awkwardly, and sometimes appear oddly out of proportion, with arms that don’t bend quite as they should and torsos that often look uncomfortably contorted. I’m not sure if it’s the uncanny valley or just a drainage ditch of ugly, but either way it’s distracting, and the distinct difference between the style of the characters and the hand-painted backdrops only serves to emphasize the peculiarities.

The voice acting, at least, is decent, although Malachi’s posh, upper-crust accent is the only one that really stands out. Some of the international accents are strangely faint, but more importantly, none of them are painfully overwrought and artificial. The music is good too, although it can be overbearing at times.

It’s an uninspiring and, despite the promise of the concept, rather boring affair, until it’s just about to wrap up, when it very suddenly switches gears into full-on infuriating. First comes an unskippable cipher puzzle that requires you to rip a man’s office apart in search of clues before – surprise! – forcing you to drive across town to find a vital hint in a newspaper that’s been conveniently left on your desk. (Yes, that’s a spoiler, and you can thank me later.) The fact that Malachi carries the latest and greatest in smartphone technology makes it, and one or two other segments, patently silly, but such is the way of adventure games and in that sense it’s tolerable, even though it feels wildly out of place. But shortly after that comes a maze, a long, stupid and utterly pointless maze that must be traversed first as Walker and then, from the other direction, as Malachi. It’s pure and entirely unnecessary padding, an exercise in tedium that comes just as the game should be hitting its climax, and so when that climax finally does arrive it’s really just a relief that the whole thing is finally over.

It’s clear that Moebius: Empire Rising is intended to be the first of a series of Malachi Rector adventures, and there’s certainly enough meat on the bone to build it into a franchise of high-level, Dan Brown-style conspiracy tales. But I’m not sure that anyone will care; Malachi Rector isn’t dark, he’s just a dick, and despite the super-secret cloak of mystery surrounding his activities, the underlying forces driving the whole thing forward turn out to be entirely banal. If part two isn’t a serious improvement over part one, I doubt very much we’ll see a part three.

Bottom Line: I had high hopes for Moebius: Empire Rising, but while it shows early promise it ultimately falls far short of living up to it. I suspect that Jane Jensen has a good story to tell, but this is definitely not the way to go about it.

Recommendation: Jensen is also working on the Gabriel Knight: Sins of the Fathers 20th Anniversary Edition. Cross your fingers and wait for that. (Or a really cheap Steam sale.)

Tex Murphy: Under a Killing Moon– A Rough Case