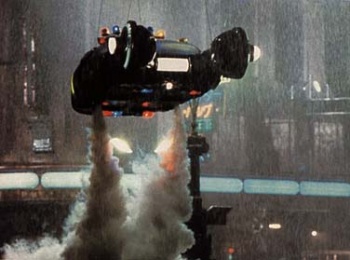 The future depicted in Blade Runner is already a reality today, at least in regards to the sounds cars will make.

Aren’t electric cars great? They’re so silent that nobody can hear them coming. This turns out to be a bad thing, as it makes them easier to sneak up on you and run you over. Nissan has found the solution: adding artificial sound.

Toshiyuki Tabata, a long time engineer with Nissan that spent decades reducing the sound coming out of his company’s cars, was told a few years ago to actually start making them create more noise. The lack of sound emitting from electric vehicles like the Prius and Nissan’s upcoming Leaf is now a safety concern, particularly in regards to the blind, elderly, disabled, or children who may be less likely to notice an oncoming car, especially one covered with OctoCamo. Tabata decided that if he was now going to add sound to a car, he had to “make it beautiful and futuristic.”

Tabata’s result was a sound similar to that made by the flying cars, or Spinners, from Blade Runner, Ridley Scott’s futuristic 1982 release set in 2019. I would have prefered the noise made by George Jetson’s car, but I suppose I’ll still be able to go on with my life anyway. Regulations and recommendations for the minimum noise level of an electric car are currently in the works in both Japan and the U.S.

These artificial noises, however, would likely be turned off once a car reaches 12 mph/20 kph, because more noise is naturally generated at that speed. But, it doesn’t end with the Blade Runner flying car sound. Electronic devices manufactured specifically for cars have already been made that can emit a “cat’s meow, a cartoon-like ‘boing’ and a human voice saying, ‘Excuse me.’ Whatever happened to listening to just sticking your head out of the window and cursing profusely? The next time you hear twinkling or crickets chirping, it might end up being an electric car slowing its roll.