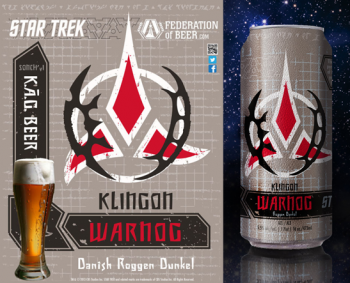 A hint of mild banana and clove? See if Kahless can tell the difference between this and the genuine article.

The Canadian Federation of Beer, official partners of the Star Trek franchise, have something special in store for Klingons and would-be Klingons in North America: Warnog, a Roggen Dunkel style ale with hints of banana, clove and caramel. Just the thing to warm the blood on those cold nights, and if anyone in the group starts claiming to be Emperor Kahless, just give ’em a pint and tell ’em to pipe down.

This isn’t the first time the Federation of Beer has graced us with a unique beverage. Last time out the gate it was Vulcan Ale, a rather bland title for what looks to be an interesting Irish Red style brew. But that was a Canada-only offering, while Warnog will be the first to invade the US and make waste of its enemies. Before you ask, no, we don’t have a launch date on this one; coming soon is as far as the Federation of Beer is prepared to go.

Ahh, the drinking, the singing, the bananas and cloves … it’s the little things that count. Just remember, if you feel a bit out of character drinking something with so little blood and iron in it, TlhutlhmeH HIq ngeb qaq law’ bIQ qaq puS. Fake ale is better than water!

Infamous: The Power is in Your Hands