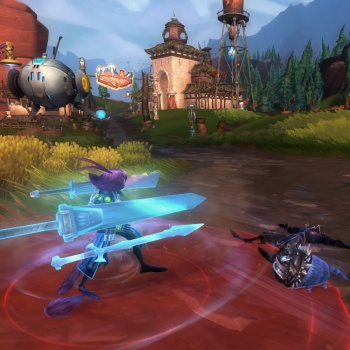 The WildStar team is confident dungeons will be super fun and engaging.

PAX Prime, the annual gamer haven in Seattle, is always about chasing your proverbial dragon. I’ve been lusting over the upcoming MMO from Carbine Studios and NC Soft pretty hardcore for the last few months, so I was very intersted in hearing from the devs on how WildStar was progressing. On hand was Stephan Frost, one of the Design Producers on the team and incidentally the narrator for the popular “Dev Speak” videos. He assured me the 4 dungeons and 2 raids designed by Brett Scheinert and available when the game launches will be challenging and active affairs.

“No ‘cigarette’ combat,” he said, bringing his right hand up to his mouth and miming a drag. “You won’t be able to smoke a cigarette with one hand while you’re clicking away with the mouse. Sorry to make you play a videogame, you need to use two hands.”

Frost and his team have accomplished that by liberally using “telegraphs” or large shapes and warning signs that show up in your UI on the ground. If you or your party ignore the flashing red, you will take massive damage, and there will be unpleasantness over voice chat.

The “telegraphs” force you to pay attention and stay active, but it goes beyond what you might see in other MMOs. First, the telegraphs constantly occur even in normal PvE fights across WildStar‘s world, but the shapes and timing is ramped up in the dungeon fights against bosses. Second, sometimes the telegraphs take up the whole room, and the only way to avoid taking the damage is to coordinate crowd control spells with all five members of your group. If all 5 of you hit the boss with CC, then the incoming damage spell will be lost.

“That goes for healers too. You can’t just sit back and watch everyone’s health bars go down,” Frost said. “You have to move around like everyone else.”

Frost also had a refreshing take on the difficulty of dungeons and the 40 man raids planned. Brett Scheinert is not pulling any punches, hardcore dungeon content is for players who want to devote time and energy to that content. “I hear players who say ‘I don’t have time to look for a group’ and I say ‘Well, sucks to be you,'” he admitted. “We will not be nerfing these dungeons at all.”

As such, there will be no Looking for Raid tool to easily team up; you will need a guild of like-minded and scheduled players to tackle the high end dungeons. It will also take some time to even attempt the raids, as each dungeon has a “veteran” – read heroics from WoW – you’ll need to run through in order to get the gear needed to be successful in the raids.

Frost did promise you will be able to level up after level 17 to the 50 level cap through dungeons and “adventures” – again, read scenarios – so if you love dungeon content you will have plenty at the ready once WildStar launches. “The raids and dungeons will be repeatable,” he said. “There’ll be different bosses in different wings. We want to get people to stick around.” A Looking for Group tool is planned, so that you can quickly find a group to tackle content without losing time recruiting a party.

The dungeons Frost showed us in a video certainly looked dynamic, and the fights had characters moving all around the open spaces to avoid damage from the telegraphs of lightning bolts and dastardly spells. I just wish I could get into the closed beta test and tell you guys exactly how WildStar feels to play.

When will that happen?

“Soon.” It seems Carbine Studios has learned the MMO space quite well.