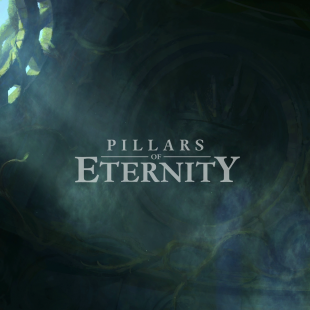 Most of us are familiar with that saying about something being ‘right up your alley’. Well Pillars of Eternity is the little Italian restaurant down the street from my alley where the wait staff knows me so well “the usual order” can be brought out on memory. Those that have listened to the The Escapist Podcast or follow me on Twitter will know that I’m a diehard fan of isometric RPGs, and the Baldur’s Gate series in particular. I have a lot of fond memories of just paging through the massive Baldur’s Gate 2: Shadows of Amn manual, not to mention playing the games. Does anyone else remember that thing? It was basically a primer on 2nd Edition D&D. Hell, it was so big that it had to be wire bound. So, it’s probably not a huge surprise that back at the height of the Kickstarter craze I was just a bit excited about the prospect of Project Eternity. Full disclosure, I pitched in $20 to the Kickstarter back in the day. Without diverging into too much of a tangent about Kickstarter, Pillars of Eternity is the most pleased I’ve been with the final crowd-funded product matching up to the original presented visions. While Obsidian Entertainment has made some changes to the formula, Pillars of Eternity is a perfect homage to the isometric RPGs of yesteryear that manages to go beyond just replicating those experiences.

It’s this sense of familiarity mixed with new concepts that is Pillars of Eternity‘s secret strength. There’s just enough of the trappings from Baldur’s Gate, Dungeons and Dragons, and the like that you’re not going to get confused or feel lost playing it for the first time. Fighters still smack enemies, Wizards sling spells, Priests heal, and Rogues pilfer everything that isn’t nailed down. But there are enough subtle differences to give you a feeling of accomplishment for trying something new or thinking outside the norm. Many of these concepts come to the fore in character creation. Besides a few setting-specific races and classes, many of the options are as you would expect – if you want to make a spry Elven Ranger or a burly Dwarven Fighter you can.

Where things start to get interesting is when you’re asked to assign stats. Might, Constitution, Intellect, Dexterity, Perception, and Resolve are certainly similar to the tried and true D&D stats, but there are some key differences. The major overhaul is an attempt to make every stat matter. No more dump stats or idiot savants. Might, for instance, is not simply physical prowess. It affects damage across the board, and healing as well. Other stats are similarly useful for all character types. Dexterity increases action speed and Intellect makes all your areas of effect larger. While this does lead to some generalization of stat distribution, it also means you’re not stuck allocating the same way for each character type or jamming away on the random button until you got all 18s. Admit it. You did it too.

Once you’re finished with character creation, you’ll be tossed into Pillars of Eternity‘s tutorial section which serves to impart your main character’s driving goal and introduce the gameplay. There is a huge amount of backstory and lore for the setting, and Pillars of Eternity is more than willing to throw them at you without tons of exposition. You’ll eventually pick up on the gist of it all, but if you want the full experience you’ll need to exhaust the dialogue options and obsessively grab and read all the in-game literature. Even reading the details on magic items is worthwhile. 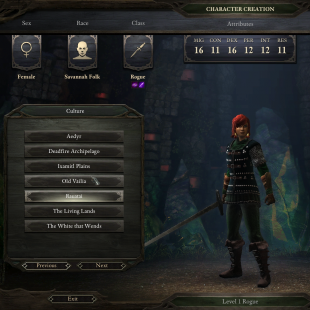 The greater story is a bit of a juxtaposition. It appears to be a little “by the numbers” with evil tyrants, religious wars, and a number of setting and story elements pertaining to souls. The characters, writing, and story are solid, as expected given Obsidian’s pedigree. However, Pillars of Eternity‘s commitment to player agency makes it significantly more interesting than the base components. Rarely are situations black and white, and you’re rewarded for digging a little deeper, though it makes the final decisions all the more agonizing. This is one game where you’ll want a firm idea of how your character would operate or respond.

During these decisions, Pillars of Eternity gives you a ton of options, but many of the more favorable interactions are locked behind skill checks. This ties back into it being worthwhile to have a diverse array of solid stats. Do you have enough Might to intimidate a drunken mob? Is your Intellect high enough to deduce what’s really going on? This leads to a great connection with your characters as they are more likely to solve problems in line with how you’d expect them to. Your Barbarian isn’t going to diplomatically talk the situation out; you’re probably just going to punch someone really hard.

It’s worth noting that there is no character experience gain for getting into every single fight. You’re rewarded for exploring and engaging with the world and quests, not simply grinding monsters. There is still loot to be had, though. This harkens back to some of the original Dungeons and Dragons rulesets where you got very little experience for monsters. Sneaking past a nasty encounter and stealing all their treasure – along with the quest items – is just as valuable to advancing your character, once again reinforcing your player agency to tackle challenges in a variety of ways.

Inevitably though, you’re going to get into combat which means using Pillars of Eternity‘s real-time system, though you’re going to be heavily abusing the pause button. If you’ve never played an isometric RPG like this, it ends up being a pseudo-turn-based system. You’ll pause to give a bunch of commands and get a feel for the battle, and then unpause to let it play out for the few seconds. If everything is going smoothly you let it run or can hop back into pause to adjust as needed. There is an additional option to run the game in half time if you’d rather not jar to a halt all the time.

The combat is all built upon the notion of action speed and recovery. For instance, there isn’t any arbitrary reason that any class can’t wear certain armor. Heavier armor just means you’re slower to make your next action. Maybe it’s worth it for you for your wizard to be a little slower on subsequent fireball in order to survive melee combat. The combat is tactically fun, and you’re rewarded for figuring out weaknesses and crafting an ideal party with a game plan. There are a number of characters to recruit in the world, but you’re also free to hire, and custom character create, adventurers – akin to Icewind Dale, making it even easier to fill in the gaps of your perfect group.

The only time the combat really runs into problems are when occasionally a fight drags on to a stalemate. Usually what happens is all your other characters except your heavily armored fighter are unconscious and you’ve used up all the available skills. So you end up playing random number generator with an enemy or two into tedium. My only other gripe is that at times a big cluster of characters can get a little too busy, and it will be hard to make out who is attacking who and which characters are currently engaged. Though is a problem more inherent than Pillars of Eternity specifically. Engagement is important to have a handle on because it replicates the attack of opportunity of other tabletop games, so archers and magic-users can’t just keep running away nor can melee rush past your defenders. 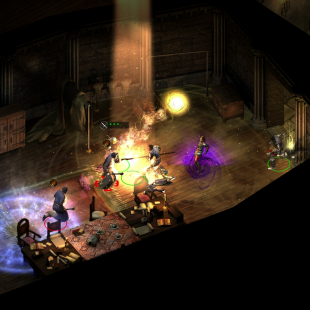 Once you’ve taken damage you’ll start to get used to Pillars of Eternity health, and death, mechanics which is initially a little jarring and takes getting used to. Rather than just a health bar, characters have health and endurance. Endurance is a smaller pool of hit points that refills quickly out of combat, but if you’re reduced to zero endurance you’re knocked out. Most of the game’s healing spells and potions refill endurance. Whenever you take endurance damage, however, you also take some health damage. Health represents a more permanent injury, and can only be recovered by resting or a few limited abilities. Depending on the difficulty and options, being reduced to zero health either kills or maims the character. A maimed character can still get up after the fight, but has severe penalties, and will die if damaged again. There is no raise dead, though – or at least that I’ve found – once a character is dead, they are gone.

This still means you need to make good choices in combat and not get in over your head when you’re weak, but it avoids some of the awkward item juggling of older games when a characters goes down in a fight and you need to pick up all their crap, and then backtrack to town to revive them.

Also, can I just take a moment to express my affection for how Pillars of Eternity handles difficulty. Only on the very highest difficulty setting are the actual stats adjusted. Changing the difficulty otherwise only affects the type and number of opponents present at the location, rather than just turning everything into a bucket of hit points and making those all hit like trucks. There’s also a plethora of options in order to customize the experience further. Elite Mode removed many of the helpful UI elements, like AOE indicators, and Trial of Iron is an ironman mode that limits you to one save and deletes it if you die.

There are even further additional tweaks to specific gameplay elements, including what’s likely to be the most contentious – the Stash. The Stash is a shared inventory space that depending on your options will even be available in the field. It’s where your quest items and crafting materials will get dropped, but if you play with the Stash enabled you can put items in from the field. It basically unbalances a lot of the experience. There’s already been some hand waving of merchant’s available coinage to buy items and items only being slot based instead of having a weight, it’s much too easy to make tons of money by simply vacuuming up every rusted sword with the Stash. Granted, Pillars of Eternity does counteract this a bit by having many of the items drops, like monster bits and gems, be necessary for crafting.

Finally, on the technical side, I’ve run into almost no problems. I’ve hit one minor gameplay issue where a party member with an ability to second chance being knocked out will awkwardly stand up, and you’ll still get the game over screen if he was the last one to go down, but otherwise everything has been smooth or they were something Obsidian is already aware of. The game runs well even with lots of spell effects occurring at once. Which you’ll start to see gobs of them when they are multiple casters on both your team and the enemy and it’s quite visually impressive. Graphically the character models are a nice improvement over traditional isometric RPGs, though the backgrounds don’t quite stand up to some of the more picturesque older titles.

Bottom Line: It’s the best new, isometric RPG to come out in years.

Recommendation: While Pillars of Eternity is certainly banking on a nostalgic fan base, it’s still an excellent RPG in its own right. It’s a game rich with player agency, giving you tons of control to craft your story or explore different solutions to the presented problems. You know, actual roleplaying not simply a game with a leveling and stat system stapled on.