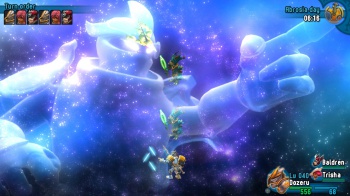 From the moment the very first cutscene plays, Rainbow Moon wants to draw you in to its beautiful world. An eerie mist parts before an ominous mountain range, barely concealing a clouded full moon. An emphatic narrator weaves a tale of ambition, rivalry, and a mysterious power gone awry. Within minutes, you’ll find yourself fighting for your life against mischievous imps, outsized bees, and cutthroat adventurers.

Enjoy it before the novelty wears off, because within the first few hours, you’ll have seen all there is to see in the game.

Rainbow Moon is a traditional strategy-RPG in the style of the venerated Final Fantasy Tactics. You’ll take control of a small band of heroes who wander along a grid-based battlefield, stopping now and then to dish out attacks, chug healing potions, or unleash powerful magic spells. At battle’s end, you’ll rack up experience points and items to prepare you for the fights ahead, usually no more than a few seconds away. While the battles are much shorter and faster-paced than the average SRPG, the gameplay will be second nature if you’ve ever played one before.

The ability to choose a helpful item at the beginning of the game (such as armor or a potion set), along with a gradually decreasing number of tutorial screens, ensures that new players will be comfortable learning Rainbow Moon‘s ropes. In fact, you won’t even be able to move and attack in the same turn until a few levels in. There are healing items in every nook and cranny, and dying in battle will simply boot you back to a moment or two before the encounter (albeit with almost no health). Since healers, item vendors, and savants (who can raise stats in exchange for Rainbow Pearls, a form of currency) can be found on every map and in every dungeon, the game’s challenge is very manageable, at least early on. Encounters become considerably more difficult as the adventure progresses, due to an abundance of negative status effects and potential one-hit kills, but the gameplay fundamentally works and remains relatively balanced throughout.

Rainbow Moon is problematic, however, in that very little about the fundamental gameplay ever changes or evolves. During your relentlessly padded quest, you’ll recruit members for your three-person party, encounter new enemies (which, even early on, are often just reskins of old ones), upgrade your equipment, and boost your stats, but exploration, character management, and battles grow stagnant after a while. Fighting a horde of imps at Level 1 is essentially the same experience as fighting a fire golem at Level 20, only with much bigger numbers flying around the screen.

Usually, a good story and a memorable cast of characters can bolster otherwise unremarkable gameplay, but unfortunately, Rainbow Moon has neither. Baldren, a nondescript swordsman, is the game’s silent protagonist, and aside from the fact that he likes to fight and has a rival, there’s nothing to him. More characters join your party as the game progresses – usually after giving you a massive series of fetch quests to complete – but they contract Baldren’s muteness as soon as they grant their aid. Some characters have one or two personality traits, but they have no real development, save for their stats and equipment.

The plot concerns Baldren’s attempts to return home after being spirited away to the phenomenally generic world of Rainbow Moon, but there is nothing at stake, no sense of pacing, and nary an interesting mission. An hour in, you’ll be collecting ladders to bridge small holes in the ground. After five hours, there is a pivotal plot mission in which you will hunt down a comb for a preening woman. The first real event that moves the story does not occur until approximately 12 hours in, during which time you will have traipsed through only a few convoluted, overlong dungeons. Thankfully, you can skip the game’s multitudinous random encounters, although doing so will likely leave you under-leveled for the surprisingly tough bosses.

At least Baldren’s bland journey is easy on the eyes. Rainbow Moon is a gorgeous game, channeling the general aesthetic and palette of Torchlight, but with much more diverse landscapes and a stunning attention to detail. Swaying flowers litter densely- wooded forests, swampy marshes ooze desolation, and wisps of saltwater stream from the sides of a raft traveling over the high seas. True to the first half of its name, Rainbow Moon makes use of vibrant blues and greens in its overworld and cheerful reds and yellows in its towns.

While there is definitely a crowd that will enjoy Rainbow Moon for its many sidequests, huge world, and character-building potential, it ultimately doesn’t do much to differentiate itself from the more iconic SRPGs that inspired it. For $15, you could do much worse, but you could also order a pizza, rent a movie, and have roughly as memorable an experience.

Bottom Line: Rainbow Moon isn’t terrible, just terribly dull. It’s functional and fun to look at, but the lack of story, character arcs, and creative mechanics makes it a chore to play.

Recommendation: If level grinding is its own reward for you, this is worth a purchase; otherwise, there are better ways to get your SRPG fix.

Magic: The Gathering Pros Sling Spells for a Cause