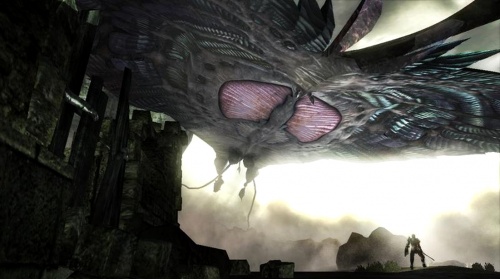 Game cover art is designed to stand out from the other software piled onto a store shelf, to catch the eye and offer potential customers a peek at what the game within might be like to play. What impressions, then, can be drawn from cover art that shows the player as an arrow-riddled corpse, slumped against a blood-stained wall?

From Software’s awkwardly-titled PS3 release, Demon’s Souls is just such a case. A spiritual successor to the company’s King’s Field series, it combines a brutal difficulty level with monstrous boss battles and intriguing multiplayer options. These features provide an incredibly satisfying dungeon-crawling experience, though a few of the game’s quirks bring more frustration than challenge, and risk souring the deal for less patient players.

Demon’s Souls’ premise is straightforward. The king of Boletaria has inadvertently unleashed an ancient evil upon the land, covering it in a deep fog full of soul-sucking demon lords, and now it’s the player’s job to plunge in and send them back where they came from. What the story lacks in complexity is made up for with the game’s amazing sense of atmosphere. Each of the five main dungeons maintains a tense, foreboding aesthetic style: from a dark, claustrophobic tunnel complex to a poisonous, slime-choked bog. Character design introduces a medieval styling, with large shields painted like cathedral frescos and wickedly fluted maces. It’s a rare thing to see a Japanese game willing to encase its protagonists in full-face plate armor. A few concessions are made to Japanese ‘unrealism’, with super-sized greatswords and warhammers peppering the equipment lists.

Boletaria bristles with a sense of hostility as if the entire world is set against its would-be saviors. Even lower-level foes might qualify as mini-bosses in other games; giant flying stingrays lazily fling spikes the size of telephone poles at players and armor-clad skeletons rapidly somersault towards their prey. The boss battles are colossal affairs, with building-sized enemies rampaging around their lairs. A particularly memorable boss encounter involves a blind, flaming giant. Relying only on its hearing, the behemoth randomly strikes out with a gargantuan sword, feeling its way around the cavern. If the challenger is careless enough to clatter around while running the giant bounds toward the sound in a screaming dash, cracking the floor with a massive blade-sweep which is easily capable of killing a player outright.

And death is not a happy state to be in. Dead players respawn at the beginning of the level in phantom form, their health capped at fifty percent, with every enemy returned to life, and the player’s soul points abandoned at their bloodstains which they must fight towards and touch to recover. Yes, Demon’s Souls has brought the corpse run to single-player gaming. Failing the corpse run causes the accumulated souls to be lost permanently. Death hobbles a player with less health, leaving him penniless and more likely to succumb to the challenges that killed him in the first place. It encourages farming and grinding behavior, demanding repeated returns to completed areas to harvest the soul points required to finance the ever-increasing costs of leveling up attributes, weapons and armor. 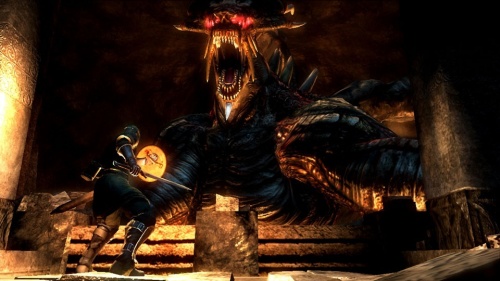 Fortunately, dying is also where Demon’s Souls gets interesting, as it also constitutes the core of the game’s online options. When playing online, players will often see ghostly silhouettes scampering about the area. Those represent the other players as they move about in their own worlds, not unlike the “Albion orbs” of Fable II. Additionally, players can leave messages on the ground that others can see. The available messages range from combat hints (“Magic works well here”) to hilarious non-sequiturs (“Cute foe ahead”). Messages can be rated, which will reward its author with an automatic health-refill. Thus, you will often see the spots before boss battles littered with glowing messages stating: “I’m getting my butt kicked, please rate this message.”

Demon’s Souls’ cooperative play is also similar to that of Fable II. Phantom-form players can put down a summoning sign that allows living players to invoke them into their game as “blue phantoms”; to work together to pass a stage or beat a boss. Helping a living player defeat a demon boss automatically rewards blue phantoms with their bodies and a return to their own world.

However, unlike Fable II, the phantom-summoning isn’t limited to cooperation, and also extends into the PvP space. Phantom players can invade a random player’s game as a black phantom, where the task is to stalk and kill that player in what essentially amounts to sanctioned griefing. Managing a successful assassination rewards the black phantom with a free revival; being defeated transfers the would-be assassin’s soul points to the intended victim.

This kind of cat-and-mouse play feels incredibly tense, particularly since both characters still have to deal with the already-formidable hazards of the level itself. In fact, fighting another player is the core of one boss fight, where another player is automatically summoned and forced to be the boss in a one-on-one deathmatch, Thunderdome style.

However, the online environment isn’t always abounding with multi-player combat. It can be quite difficult to find a match at the higher player levels due to the relative lack of available companions (or opponents). The location of the servers can result in disconnections, unceremoniously kicking players back to the main menu, even in the middle of a boss fight. This causes the players to be forced to redo the boss fight, only now sans any supplies used before the cutoff. But in the end, Demon’s Souls manages to inject an uncommon sense of community and motivation into an otherwise solitary (and potentially will-breaking) experience.

Bottom Line: Demon’s Souls is definitely not for the faint of heart. It represents a refreshing bastion of hardcore ass-kicking in a world where challenge seems to have been sacrificed in favor of accessibility. Being already in full English, it’s hard to imagine why this hasn’t been released in the Western market.

Recommendation: If you’ve been thinking that games have been too wimpy nowadays, import Demon’s Souls and celebrate as it chops your face off. Well, that or at least clamor for its release.

Josh Tolentino finds it cute that the voiceovers sound like native Japanese speakers were made to speak ye-olde-English lines in whatever they thought sounded most like a European accent.

Get Old, Become a Danger in Driver Seat