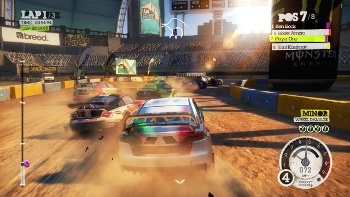 Codemaster’s Dirt 2 delivers more of the same stuff that made the original Dirt an immediately enjoyable racer when it released in 2007.

The sequel builds on the work that Codemasters did on the Colin McRae Rally series. The first thing you’ll notice is that, like its predecessor, Dirt 2 employs one of the coolest, most cinematic menu systems out there. Rather than just scrolling up and down a boring menu, you walk around your trailer and the surrounding area outside it.

The game features about 100 races scattered across different continents. Dirt 2 sports a healthy variety of locales, so you won’t get bored from looking at the same scenery over and over. The game jumps all over the place – from the nighttime streets of Tokyo to the hills of Morocco to the deserts of Baja California. Similarly, there’s plenty of variety when it comes to different race events. That said, for a rally title, Dirt 2 could use more rally events. It’s good to break up rally races with street-style events and whatnot, but the game does more than use other race types as a supplement. Unfortunately, the majority of events in Dirt 2 are not rally.

Still, the game is fun. Rally fans will easily get hooked as the game keeps rewarding you for playing. As you level and earn more cash, you’ll unlock new races, cars, liveries and goodies for your cars. In addition to normal race events, you’ll also be invited to the X-Games and World Cup tournaments. As far as car selection goes, this is no Forza or Gran Turismo, and the somewhat underwhelming selection of cars is certainly a weakness of the game.

At the heart of Dirt 2 are its racing mechanics. The game falls somewhere in between being an arcade racer and a simulator, but it definitely feels more like an arcade racer most of the time. The game’s controls are kind of loose and challenging to handle – you always feel like you’re about to slide out of control – but not so much that new players won’t be able to enjoy the game. However, there’s definitely room to develop skill at maneuvering through Dirt 2’s courses, which is something that adds a lot of lasting appeal to any racer.

One of Dirt 2’s bigger issues is somewhat related to its controls. As mentioned, there are numerous different kinds of race events in the game. As a result, you’ll have to race a variety of different kinds of vehicles. During rally events, you’ll drive rally cars like the Mitsubishi Lancer and Subaru Impreza. But there are some events that force you to take control of buggies and trucks. Problem is that both of these vehicle types aren’t nearly as fun to drive as the rally cars. The races that force you behind the wheel of either of these vehicles are the low point of Dirt 2, and unfortunately, if you want to make your way through the game’s campaign mode, you’ll have to deal with them.

But when you’re driving rally cars, things are great. Especially if you’re playing using the game’s in-car camera view. Codemaster’s in-cockpit view is absolutely fantastic. You can pan around the interior of the car using the analog stick, and because everything is so meticulously detailed, you’ll find yourself totally immersed. The in-car view coupled with the realistic damage effects, not to mention impressive visuals, provide a totally awesome experience.

Although Dirt 2 is more or less an enhanced version of its predecessor, the game’s developer has implemented some new features, such as the flashback system first introduced in Grid last year. With it, whenever you totally mess up and crash, you can rewind a few seconds back before you bit the dust. This is a great feature for the obvious reason. Don’t you hate it when you’re in first place, kicking ass on the race track and then you go do something stupid like crash into some bushes? We’ve all done it, and it sucks. But thanks to Dirt 2’s flashback system, you can rewind and pretend like it didn’t happen.

Dirt 2 also features a friends system that’s worth noting, but it sadly falls short of what it could have been. As you play, you’ll befriend other racers, who will then keep you company by talking to you in the menu and before and after races. But you can only befriend racers. Why not be able to make rivals as well? It’s kind of a missed opportunity.

Bottom Line: The original Dirt was a great rally game, and its sequel is even better. The main single-player mode offers plenty of entertainment, and when you’ve made your way through it, there’s online play to jump into. Admittedly, I would have liked to see more rally events, but that’s not enough to change the truth that Dirt 2 is an exciting, well-done racer.

Recommendation: Racing fans, especially rally fans, should absolutely check out Dirt 2. Give it a rent, and see what you think.

Phillip Levin is a freelance video game journalist who has been writing about games for eight years. He lives in Southern California and writes for numerous publications.